Ken Griffin Hits Pritzker Over Violence, Threatens to Move Citadel Out of State

Updated with Comments from Pritzker Camp 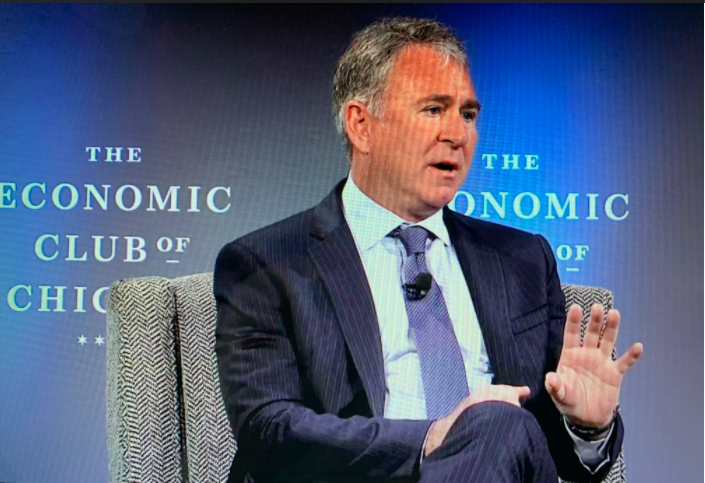 Ken Griffin, the Chicago hedge fund titan who has become increasingly active in Illinois politics, said Monday that he had no plans to run for office himself. But Griffin did lay out a broad attack of Democratic Gov. JB Pritzker that Republican politicians are likely to mimic in the months ahead.

Griffin spoke with a friendly crowd of business elites at the Economic Club of Chicago as he denounced Pritzker for letting crime in Chicago get out of control, allowing the state’s pension bills to climb and for tolerating inadequate schools.

The climate in Illinois – and in Chicago, specifically – had become so inhospitable, Griffin claimed, that it would likely be “years, not decades” before the hedge fund he ran, Citadel LLC, relocated its headquarters from Chicago to somewhere out of state.

“It’s becoming ever more difficult to have this as our global headquarters, a city which has so much violence. I mean Chicago is like Afghanistan, on a good day. That’s a problem,” he said.

Griffin said he spoke with Pritzker, another billionaire, about the ongoing violence in Chicago last year.

“If that saves the life of a child, I don’t care,” Griffin continued. “We have our work cut out for us because we have a government in our state that continually puts votes in front of people, votes in front of lives, votes in front of schools, and we need to start taking the state back inch-by-inch from people that put their politics first and put our people second.”

The governor’s office did not immediately return a request for comment, but his staff criticized Griffin’s remarks on Twitter. His chief of staff, Anne Caprara, said she was on the call with Pritzker and Griffin, but the governor never made the comments Griffin described.

“Even worse than his lies,” she continued, “Ken Griffin has actively worked to dismantle the vital ecosystem of social services that prevent violence, including mental health care, housing and paying a living wage. Governor Pritzker will continue working to help local leaders as they confront the national epidemic of gun violence.”

But Griffin’s concern about violence echoes criticisms from Illinois Republicans in recent weeks. Rep. Jim Durkin, the head of the House Republican caucus, told the Center for Illinois Politics last month that Democrats “all turned their back on law enforcement” by making the criminal justice system “softer and kinder on hardened criminals,” pointing to a law that will end cash bail.

On Monday, Griffin said one of his top priorities for improving Illinois would be to make sure “police officers who have our backs on the street” will “feel like we have their backs.”

“We need our police officers to know that they are also entitled to the rights of being an American citizen, that [they] are innocent until proven guilty. It’s incredibly hard to do your job as a police officer, if, the moment you have to protect yourself, you have to wonder: Will you go to jail? Will you lose your job? Will you be publicly persecuted and humiliated before any of the facts come forth?” Griffin said.

Another key theme Griffin returned to was public corruption.

Both of Griffin’s efforts linked Democrats to then-House Speaker Michael Madigan, who was also the chair of the state Democratic Party. Many of Madigan’s confidantes were indicted as part of a corruption investigation into Commonwealth Edison, the electric company. Madigan left office in January, but subsidies for the nuclear plants Commonwealth Edison uses were part of a major renewable energy package that lawmakers passed last month.

Instead, he said, “Exelon just had a $700 million bailout for its nuclear fleet after having admitted it was engaged in corruption just months ago. There is no end to the amount of corruption that takes place in Illinois, and it loses the credibility of Springfield and...the governor.”

The two nuclear sites that Exelon had threatened to close down, in Byron and Dresden, are represented by Republican lawmakers, most of whom supported the legislation.

Griffin broke from Republican orthodoxy on other issues, though. He supported the widespread deployments of COVID-19 vaccines, including employee mandates for workers who interacted with medically vulnerable people and for schoolchildren (once the FDA gives full approval of the vaccine for kids under 12).

The Chicago billionaire also supported the Federal Reserve’s efforts to stimulate the economy and lower unemployment rates, even if those efforts contribute to higher inflation. And he supported the bipartisan infrastructure bill that passed the U.S. Senate this summer, while lambasting a $3.5 trillion social policy bill congressional Democrats are trying to pass in tandem with that measure.

But Griffin said things in Illinois had gotten worse in the eight years since he last addressed the Economic Club, on everything from street violence to school quality to pension debt.

He called for new Illinois state employees to be enrolled in Social Security and defined contribution plans similar to 401(k)s, rather than the pension plans they receive now. And he said that Illinois schools, particularly those in Chicago, should extend their school year and school hours to improve outcomes and make up for instruction time lost during the pandemic.

Those ideas, though, have never gained traction in Springfield.

“What kills me is that J.B. Pritzker, Governor Pritzker, understands the math,” Griffin said. “He understands the issues. I can’t believe he won’t actually use this stunning amount of political capital he has to fix the problem.”