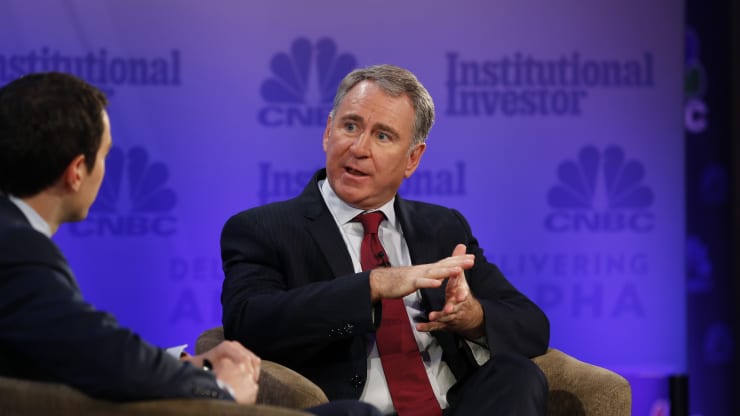 Griffin, founder and CEO of Chicago-based Citadel, donated $20 million on September 4th to the Coalition to Stop the Proposed Tax Hike Amendment, giving the tax hike opponents a fighting chance in the high-stakes battle over whether the state should switch to a graduated income tax.

“He obviously feels very strongly about the progressive income tax proposal,” said Carolyn Grisko, CEO at communications agency Grisko LLC. “And he has the resources to back up his position with the money that he feels with help thwart its passage.”

The push to institute a graduated income tax is largely opposed by the state’s wealthiest taxpayers, by Illinois’ business community, and by Republicans statewide. But forces opposing the referendum were woefully underfunded until Griffin entered the picture. As of June 22 (according to Center for IL Politics) the Coalition to Stop the Proposed Tax Hike Amendment had $21,090,000 on hand. Compare that to the $56,500.586 on hand for Vote Yes for Fairness which supports the referendum. That effort is largely fueled with $56.5 million donated since 2018 by another billionaire, Gov. Pritzker.

The anti-tax forces never expected to match Pritzker’s war chest dollar for dollar. But Griffin’s donation gives them a fighting chance to counter the blizzard of broadcast ads and direct mail that Pritzker’s money will enable proponents to supply.

The advertising battle began weeks ago, with the Fair Tax group first urging voters targeted as likely supporters to cast their ballots by mail. The referendum-specific advertising started on digital media, initially by Fair Tax supporters with opponents' ads later joining the fray. The blizzard of ads has now moved to TV, both cable and over-the-air- channels with frequency only expected to increase and move to prime time as Nov. 3rd moves closer.

UIC Political Science Prof. Chris Mooney believes most taxpayers accept that the rich should pay a higher percentage of taxes than the middle class or the poor. “It has an intuitive feel for most people. If you make more, you should pay more. So opponents are going to have to come up with other arguments. And the main argument is, ‘We don’t trust these guys.’ Trust in Illinois government is low and rightly so given the corruption in this state, especially the last 30 years or so. Griffin’s money allows them to get that message out.”

Griffin’s personal wealth is estimated by Forbes and Bloomberg’s Billionaires Index at $15 billion dollars, making him one of the 50 richest people in America. Those deep pockets have doled out more than $1 billion in contributions to local charities and non-profits. Some of Griffin’s larger philanthropic donations include $19 million for the modern wing of the Art Institute; $16 million to Lurie Children’s Hospital; $10 million for an experimental school in Chicago Heights, the Griffin Early Childhood Center; $2.25 million to Woodlawn Secondary School, a charter school operated by the University of Chicago; and almost $1 million to the Chicago Symphony Orchestra.

Over the last two decades, Griffin has also proved to be a steady source of funds for political candidates, mostly Republicans. Griffin did donate $2 million to Bill Daley’s failed 2019 Chicago mayoral bid. And he contributed $325,000 to Mayor Rahm Emanuel’s 2015 campaign.

However, by far the biggest recipient of Griffin’s political largesse was his philosophical soulmate from the world of venture capital, former Gov. Bruce Rauner. Starting in 2013, Griffin sank more than $36 million into Rauner’s political operations, including a $20 million 2017 donation to boost Rauner’s re-election bid.

In a Chicago Tribune Op-Ed on September 11th, Griffin laid out his reasons for forcefully entering the tax referendum battle. He attacked Illinois Democrats for unchecked spending and political corruption.

“We all feel the impact of Springfield’s reckless spending, entrenched patronage and poor policy making,” Griffin wrote. “The state faces chronic budget deficits, and has a bill backlog of more than $7.3 billion. Yet our elected officials continue to claim that another tax increase will solve the problems they created.”

Until now, Griffin has chosen for the most part to be a behind-the-scenes player in the political world, writing checks but seldom speaking out. Some speculated that Griffin’s move to take a public stance on the tax fight…in other words to put his mouth where his money is…could be a precursor to more direct politicking.

“I’ve never heard Griffin was interested in running for office,” said Hud Englehart, veteran corporate public relations executive who served as Gov. Rauner’s communications strategy chief. “The only person I knew who was close to Griffin was the governor.” Englehart, managing partner at Beacon Advisors, told me “Rauner used to say he ran for public office because no one else in his circle, in that venture capital world, who was concerned about the direction of the state, no one else was willing to do it.”

Rauner, who spent $137 million of his own wealth on his 2014 and 2018 gubernatorial  campaigns, also spent millions more bankrolling the Illinois Republican Party. Those are funds the GOP has sorely missed since Rauner left the political scene. What’s more, the GOP doesn’t control a single statewide elected office, meaning it’s desperate for any kind of victory.

“The feedback we’re getting from voters on their doorstep is the majority of people are against the tax referendum,” said GOP political consultant Jon Zahm who focuses his work from the collar counties to Western Illinois. “With Covid-19 and some people not back to work and industries like the restaurant business struggling…I think it’s going to be hard in this environment to get this passed.”

Zahm is working with GOP candidate Jeanette Ward, who’s running to replace Jim Oberweis in the 25th state senate district. Oberweis is leaving that seat to challenge Democratic Rep. Lauren Underwood for Congress. He believes the tax referendum gives Republican candidates a major issue in the election, and a way to strike back at Democratic dominance in Illinois.

“I’m speaking at a conservative gathering in Galesburg,” said Zahm, “and my opening will be, ‘Anyone here want to cast a vote against Mike Madigan?’ The way they can do it is to vote against the tax referendum.”

That’s a strategy that some Democrats acknowledge could be effective for Republicans. “It gives them something to rally around. It gives them a reason to come out to the polls,” said Dan Seals, two time Democratic congressional candidate in the North Shore’s 10th District. “The arguments are businesses are fleeing the state as we raise taxes. It’s easy to motivate your base around something like that.”

The looming federal investigation implicating House Speaker Mike Madigan provides another hammer for Republicans to pound home the issues of corruption and distrust.

“But to me the swing edge on this is going to be what (Democratic State Treasurer) Mike Frerichs recently said in June at a Des Plaines Chamber event. It opens the door to the possibility of tax retirement income. That’s a big, big issue right there,” said Zahm. “That can be targeted online and through mail to senior voters. They really can’t walk that back.”

Seals added, “If I were a Republican strategist, I’d say, they’re gonna tax your retirement income. I would say guys, the economy is already on the ropes. The last thing we need is a tax increase now. And look what Madigan’s wrapped up in. Are these the people you want to trust your money with?”

Said Mooney, “It’s a winning strategy for them. I think it’s going to be pretty easy to defeat this thing.”

If he’s right, Ken Griffin could justifiably point to his outsize donation and take the lion’s share of the credit.