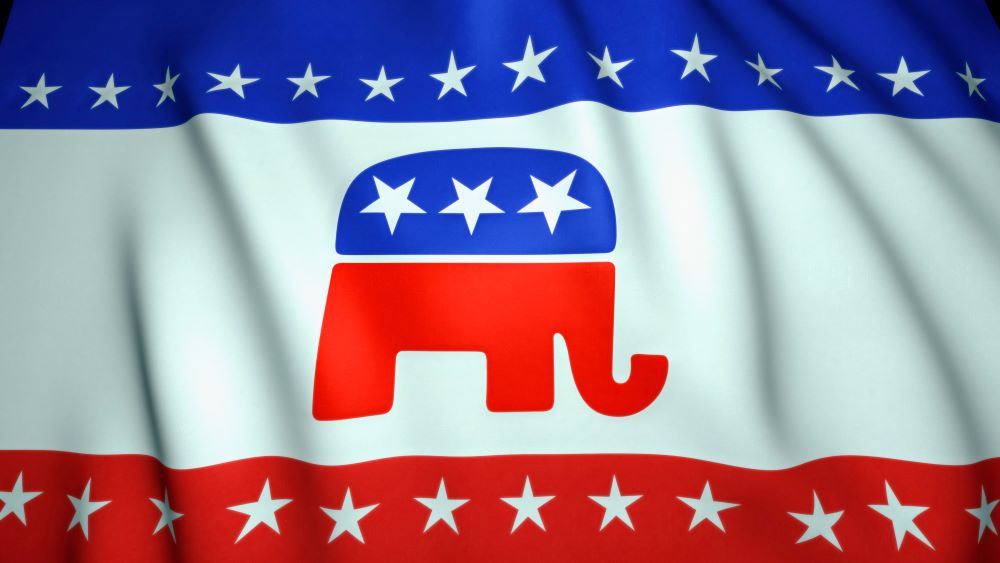 As Illinois Republicans prepare for what one leader has called a “do-or-die election” next year, the party’s future might come down to two men: Donald J. Trump and Kenneth C. Griffin.


One could set the tone for the GOP’s messaging. The other could provide the money to bankroll campaigns --- or not.

The former president remains the center of gravity in the GOP, and litmus tests of loyalty and the promotion of COVID-19 vaccine skepticism may impact the ability of Republican candidates to connect with voters, especially crucial suburban ones, in a state Trump twice lost by 17 percentage points.

That, in turn, may determine into which campaigns Griffin, the Citadel hedge fund billionaire, pours his largesse.

On the surface, Republicans would seem to be facing impossible odds this decade. There are structural problems: the party is growing in the part of Illinois that’s shrinking (Downstate) and shrinking in the part of the state that’s growing (the collar counties). In addition, new chairman Don Tracy has acknowledged the party infrastructure needs to be rebuilt.

Political problems also loom: there simply are more Democratic base voters in Illinois, and Democratic control of state government meant the party once again got to draw a favorable map for state House and Senate races for the next 10 years.

But the GOP took heart in a couple of major Griffin-funded wins last November, defeating Democratic Gov. J.B. Pritzker’s big push for a graduated income tax and torpedoing the retention effort of a Democratic justice. That opened up a chance to take control of the Illinois Supreme Court in 2022.

“That is a foundation for the next cycle,” said House Republican leader Jim Durkin of the Democratic income tax failure. “It’s not just Republicans, but it was Democrats and independents…who woke up, and I’m glad they did. It came down to a matter of trust.”

On top of that, independent polling has indicated Pritzker’s highly favorable numbers in the early part of the pandemic have come back down to earth. Overall, the governor is still liked but perhaps not beloved, and business owners who bore the brunt of coronavirus restrictions may be motivated to back his opponent. Beyond that, the federal investigation that helped topple longtime Democratic
House Speaker Michael Madigan is still unfolding.

Republicans ran Illinois for a quarter century starting in the late 1970s. But the party tumbled from power following a corruption scandal under then-Gov. George Ryan, and the GOP has found itself largely on the outs for the last 20 years.

The win-loss record is stark. Republicans have won one governor election out of the five held this century after winning seven straight elections from 1976 to 1998. The single GOP victory came in 2014, when billionaire Bruce Rauner, who came out of the charter school movement, spent heavily to defeat then-Democratic Gov. Pat Quinn by less than 4 percentage points.

Since 2000, Democrats have won more than 80% of contests for statewide offices. The Republican candidates who won appealed to suburban voters --- most notably Rauner (in 2014 but not 2018) and Mark Kirk for U.S. Senate (in 2010 but not 2016). The late Judy Baar Topinka, who won three statewide elections for two different offices during this time period, enjoyed the support of suburban voters and even some Democrats.

To win statewide, Republican governor candidates have to handily win the suburbs and pile up big margins Downstate to offset the Democrats’ huge Cook County advantage. Nearly two-thirds of the vote comes out of Cook (38.4% in 2018) and the suburban collar counties (26%).

To get a chance to run statewide, the eventual Republican governor nominee first has to win a primary election. There’s a needle to be threaded: A message that wins over the party’s largely conservative primary base could prove to be a harder sell to moderate swing suburban voters in the November general election. But moving too far to the middle risks alienating Downstate voters that also are needed in the fall contest.

Republicans have been fighting internally in Illinois for decades. But the central issues that sometimes divided the party have gone from gun control, gay rights and abortion to mask wearing, vaccines and Trump loyalty. Opposing mask wearing, voicing vaccine skepticism and falsely claiming Trump won the election could play well with a decent-sized chunk of GOP primary voters. Those positions also could scare off some suburban voters come November 2022.

Durkin said he would like House Republican candidates to focus on crime, taxing and spending, President Joe Biden’s handling of the departure from Afghanistan, and inflation fears. Durkin accused top Democrats of having “all turned their back on law enforcement” by making the criminal justice system “softer and kinder on hardened criminals,” pointing to a law that will end cash bail.

“I would say (we’re looking for candidates) that fall more into the center. And they are out there,” he said.

Asked about opposition to vaccines and masks, Durkin said: “That will not be part of the equation. We are laser focused on Springfield.”

Jeanne Ives, who nearly upset Rauner in the 2018 governor primary by appealing to conservative GOP voters, suggested a different direction.

“In Illinois, you are really going to make a decision whether or not you want the government to impose its will on you in every aspect of your life, or whether you think that there are still decisions that you as an American should be responsible for making,” said Ives, a former House lawmaker who now runs a conservative policy nonprofit. “Do you still think as an American the government can only go so far in making decisions about you, your kids, your business?”

“He has basically taken away all local control on every decision,” she said. “And people are going to say, ‘Where does this stop? Do you want more government or less government?’ Very simple contrasting messages is how we win in the suburbs, and we cross party lines to do that.”


Asked what message Republican candidates should have on Trump, Ives said: “The electoral college determined that (Biden) won the election. That said, numerous states unconstitutionally changed their election law, and those states themselves are going to have to deal with it. I think that is the pat answer.”

The Top of The Ticket

While the U.S. Senate race is at the top of the ballot in Illinois next year, the governor’s race is expected to be the main event. Republicans say it’s still early --- candidate filing doesn’t start until March and the primary isn’t until late June --- and they’re waiting for the field to take a firmer shape. The new congressional map could help a trio of congressmen decide whether to seek re-election or try for a promotion to governor. Central Illinois Republican U.S. Reps. Rodney Davis and Darin LaHood have both said they’re waiting to see what the Democrat-drawn boundaries look like.


Kinzinger, whose district stands to be significantly redrawn, hasn’t ruled out a run for governor or U.S. Senate. Once a perfect Republican statewide candidate with a record of service and pro-business stances, Kinzinger could struggle to get out of a primary after making many enemies in his role as a nationally prominent anti-Trumper.


Three candidates already have declared, but GOP leadership didn’t allow them to speak at the party’s August rally at the Illinois State Fair. State Sen. Darren Bailey of Xenia in southern Illinois is best known for opposing Pritzker’s coronavirus restrictions and refusing to wear a mask on the House floor last year. Businessman Gary Rabine of Bull Valley in McHenry County has incorrectly claimed COVID vaccines were not FDA-approved and caused more than 5,000 deaths. Paul Schimpf, a former state senator and Marine from Waterloo near St. Louis, has encouraged people to get vaccinated and has tried to avoid attacking rivals so far.


On Thursday, a venture capitalist from central Illinois got in the race with nearly $11 million in his campaign fund from six donors, most of it from California tech executives. Jesse Sullivan, CEO of Alter Global, pitched himself as an outsider and told the Chicago Tribune he would avoid focusing on “wedge issues” to try to win over suburban voters.


“If the election were today, Gov. Pritzker would defeat the (Republican) candidate for governor, but it’s a long ways off,” Dillard told NBC5 last month when sizing up the field.

Dillard worked for the late Republican Gov. Jim Thompson and was chief of staff to Gov. Jim Edgar. Some veteran political observers question whether either establishment Republican could win a primary in today’s political climate.

During its quarter-century winning streak, the GOP had a strong party apparatus and leadership, and alliances with business and corporations. Those weakened as the party spent a decade in the wilderness, and when the vacuum was filled, it was by the deep-pocketed Rauner and Griffin. Rauner’s single term was bumpy, and there was another void in 2018 as he seemed resigned to losing to Pritzker.


Last year, Griffin put in $54 million or so to defeat Pritzker’s graduated income tax referendum question. Griffin also spent $4.5 million to deny retention to Illinois Supreme Court Justice Thomas Kilbride, sending Democrats scrambling to redraw judicial boundaries for the first time since 1964 as the party tries to maintain its 4-3 edge on the court.


Getting voters to vote “no” on something is easier than getting them to vote for a specific candidate. What Griffin does next year is unclear. He could help a governor candidate if one he deems electable emerges from a primary that could be divisive and messy. He also could pour millions into two open state Supreme Court races. A spokesman declined to comment on Griffin’s political contribution plans for 2022.

Republicans haven’t held the Illinois Senate since 2002 and the House since 1996. Among other factors, the numbers and a new Democratic map, which is being contested in the courts, put retaking either chamber out of reach. Cutting into the margins is a more realistic goal.


House Republicans had a net gain of one seat in 2020, and the House stands at a 73-45 Democratic advantage. That means Republicans are free to pick up three more seats to take away the Democratic supermajority. Doing so would get them a seat at the table should Democrats fail to pass a budget on time or try to pass tricky legislation that requires 71 votes. In the Senate, Democrats hold a 41-18 edge and Republicans would need a net gain of five seats to deny a supermajority --- a tall task.


Raising money has been difficult, however. Rauner almost single-handedly funded 2016 legislative races. Griffin didn’t fund the House or Senate GOP last year, though he did give $200,000 each to three suburban House Republicans.


Durkin is unsure whether big donors will open their pocketbooks for 2022.


“Right now, it’d be great if they did, but I can’t expect anybody other than myself and our members to be the ones that will raise that money,” he said.

Next year is a non-presidential year, which means Democratic turnout is often lower. Mid-term elections also typically see the party in power lose congressional seats. In Illinois, Democratic leaders tried to guard against complacency by putting on the November 2022 ballot a question asking voters to ban laws that interfere with collective bargaining rights. That could drive turnout among union members.


“Money can’t buy love,” he told reporters last month. “And I don’t think it can buy a re-election by this governor.”


Pritzker, though, doesn’t necessarily need to get voters to like him. He also has the option of getting them to dislike his Republican opponent, whoever it ends up being.

Celebrating the 400th Anniversary of Thanksgiving

What can Virginia election results tell us about next year’s Illinois races?