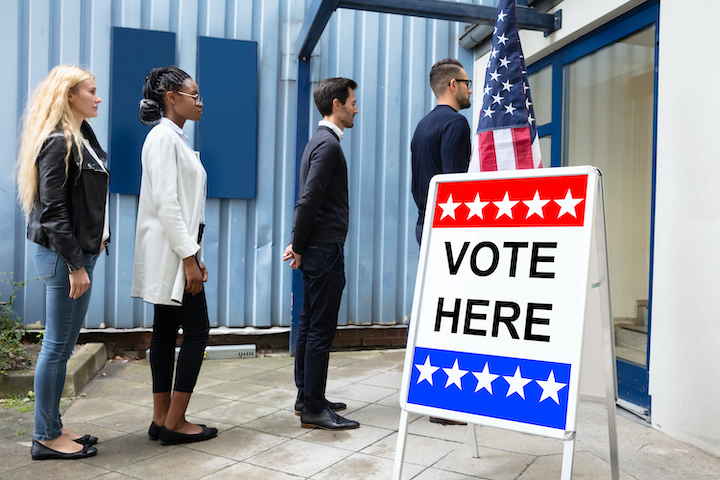 Results from Illinois’ 2022 midterm election won’t be official for a few weeks yet. In many localities, mail-in ballots are still being counted and the Illinois Board of Elections won’t certify the results until December 5. But the unofficial results are telling us some things.

“It doesn’t look like an unusually large turnout for an Illinois midterm election,” said Matt Dietrich, spokesman for the Illinois Board of Elections. “I’d estimate the statewide turnout at 50 to 51 percent.”

Where was the turnout highest?

According to unofficial results from the Illinois Board of Elections, tiny Putnam County (county seat: Hennepin, IL) led the way as 69.32 percent of its 4,104 registered voters cast ballots. Fun Fact: Putnam County boasts the oldest courthouse in Illinois which has been maintained in its original form. It dates from 1839.

There are 102 counties in Illinois, but the ten biggest voting jurisdictions (nine counties, plus Chicago which supervises its own elections) account for 61 percent of the state’s registered voters. Chicago’s turnout was 44.26 percent. In suburban Cook County, 43.87 percent. DuPage County turned out 55.25 percent (more on them later). But among the top ten most populous jurisdictions, the highest turnout came from the smallest locale. Sangamon County, which includes Springfield. IL, turned out 59.25 percent of its 135,336 registered voters.

Sangamon County Clerk Don Gray attributed the heavy turnout to his office’s efforts to inform voters about all their voting options, including mail-in voting and early voting as well as in-person voting on election day.

“And secondarily competition drives greater participation as well,” said Gray. “We had very highly contested and well-funded races in Sangamon County which played a lot on voters getting focused on the upcoming election. The first was in Illinois Congressional 13th District, which was redrawn (where Democrat Nikki Budzinski defeated Republican Regan Deering.) The other was the 48th District Illinois Senate race.” In that race, incumbent Democratic State Sen. Doris Turner narrowly defeated GOP State Rep. Sandy Hamilton, 51 percent to 49 percent.

In DuPage County, Clerk Jean Kaczmarek went the extra mile to prioritize expanding voter access. “The state required all county clerks to send out permanent vote-by-mail applications. We did it twice, before the primary and before the general election,” said DuPage Chief Deputy Clerk Adam Johnson. “Before the general election, we doubled the number of in person voting locations, from 11 to 22. And we were the first county in the state to allow voters to vote in any polling place on election day rather than being limited to their home precinct. That partially resulted in the high turnout numbers we saw.”

The general election also confirmed the growing popularity of early voting and mail-in voting, despite the efforts of conspiracy theorists claiming, without evidence, that both methods are less secure than election day voting. In Chicago, unofficially 179,700 persons voted early, while 176,178 mail-in ballots were received. With a total of 682,008 ballots cast, that means 52 percent of Chicago’s ballots were received before election day, by mail or through in-person early voting.

Voting before election day proved equally popular in the suburbs. DuPage County unofficially received 71,185 mail-in ballots, significantly more than the 2018 midterm election, but not close to 2020’s general election. In addition, 86,600 voters cast their ballots during the in-person early voting period. Of the county’s 342,399 ballots cast, 46 percent came in before election day.

“There certainly is a growing portion of the population that likes voting by mail and intends to continue voting by mail,” said DuPage Deputy Clerk Adam Johnson. “We had 72,000 voters sign up for our permanent vote by mail list. Those are voters who intend to receive a vote-by-mail ballot every election. We do anticipate that it’s here to stay. Voters like the convenience of being able to vote by mail.”

Another trend Johnson noted: enthusiasm for in-person voting increased dramatically as election day approached. “Our early voting numbers picked up a lot in the week leading up to the election, then were off the charts the night before the election.”

It was too early for state election officials to break down the statewide vote by gender. But the Chicago Board of Election commissioners reported city voters at 55.21 percent female and 44.65 percent male. Female voters usually exceed male voters, but the extent of the disparity may be related to the power of the abortion issue in motivating women to get to the polls.

Anecdotal reports suggest more younger voters, millennials and Gen-X voters, participated in the 2022 midterms. The state board of elections can’t confirm that as yet. Unofficial figures from Chicago show that voters under age 44 made up 39 per cent of voters citywide. Chicago’s 1st Ward had 14,629 voters under age 44, the most of any ward in the city, which made up a whopping 73 percent of voters there.

And you can add this anecdote from DuPage County’s Adam Johnson:

“We can see voters as they’re checking in. We have a computer dashboard as voters are checking in across the county and I was noting the birthdates of voters checking in across the county the night before the election were considerably younger than your typical voting age population. On the Monday night before the election, we were getting a younger cohort than normal,” said Johnson. “There were lots of voters in their 20s, 30s and 40s. You’d typically see more 50s, 60s ad 70s.”