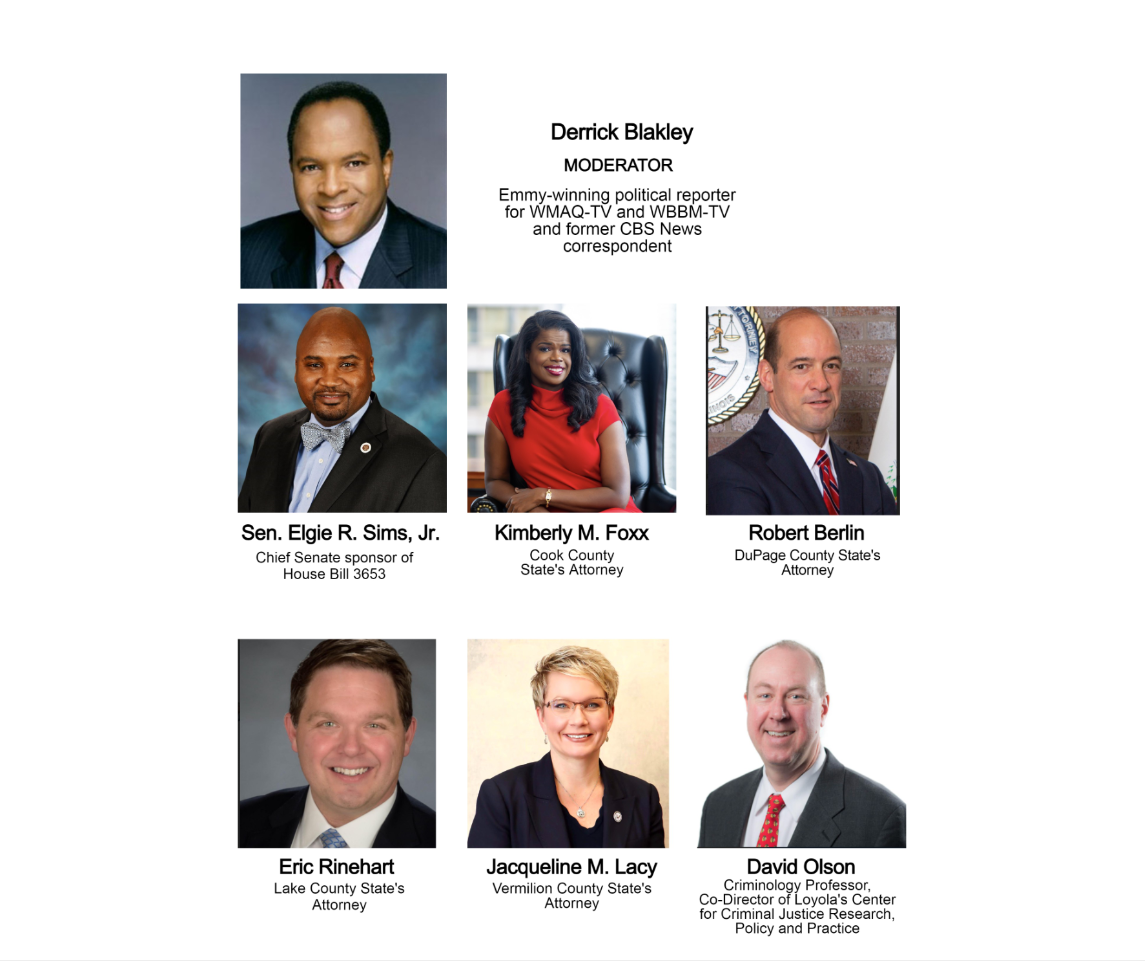 Hailed as a way to keep communities safer and as an effort to “dismantle law enforcement,” Illinois’ sweeping criminal justice reform law sparked lively discussion in a March 1 virtual event hosted by the Center for Illinois Politics.

The webinar featured state officials on both sides of a measure described as “highly controversial” by moderator and Center for Illinois Politics Contributing Editor Derrick Blakley as he kicked off the nearly 90-minute discussion on Zoom and Facebook Live.

States Attorneys Kim Foxx from Cook County and Eric Rinehart from Lake County — who support the law — were joined by States Attorneys Robert Berlin of DuPage County and Jacqueline Lacy of Vermilion County, who say it’s flawed. State Sen. Elgie R. Sims Jr., a chief sponsor of the bill, and Professor David Olson of Loyola University’s Center for Criminal Justice Research, Policy and Practice rounded out the panel that took a detailed look at the bill and then debated its perceived merits and weaknesses.

The reform measure, which Gov. JB Pritzker signed into law Feb. 22, packs a range of changes into its nearly 800 pages including the elimination of cash bail starting in 2023 and a requirement that police officers statewide wear body cameras by 2025. The law also allows people to file anonymous claims against police officers.

Under the law, which makes Illinois the first state to eliminate cash bail, evidence will be presented to judges about the risk a defendant poses to the community or a person and the risk of that suspect skipping future court dates. The judge will then determine if a person is freed or held until trial.

The law is intended to stop people being held because they cannot afford bail and to prevent those who pose a true risk from going free because they can pay. It “makes sure that we’re looking at the threat to the community when we decide who’s in jail and not somebody’s wallet,” Rinehart said. “We’ve seen time and time again when somebody uses their access to money to post bond and there are many times that there are new offenses that happen as a result of that.”

Coming in the wake of the death of George Floyd and the nationwide protests that followed, the legislation is part of a broad strategy to root out systemic racism in state government. The legislation was led by Sims, a Democrat who represents the 17th District, and fellow members of the Illinois Legislative Black Caucus.  The law aims, Sims said, to bring “safety to our communities, accountability to law enforcement, and fairness and equity to our criminal justice system.”

Opponents like Lacy, however, say the law is a poorly drafted piece of legislation that’s “an effort to systematically dismantle law enforcement.”

It actually “hurts the safety of the citizens of Vermilion County,” she added, pointing to what’s now to be required to hold a suspect before trial.

Berlin held up New Jersey’s cash bail reform law as the better measure because of what he said was its more precise language regarding who can be detained. “It’s not that many of us are opposed to the concept of eliminating cash bail,” he said. “We need to have a broad preventive detention statute that protects victims and protects the community.”

Sims and Rinehart both mentioned Kyle Rittenhouse, the Illinois teen charged with fatally shooting two people during a protest in Wisconsin. Rittenhouse went free after posting $2 million in bail paid by supporters, an example, they said, of justice system inequity.

“You say Kyle Rittenhouse,” Foxx said, “I remind people [former Chicago police officer] Jason Van Dyke was charged with first-degree murder in the murder of Laquan McDonald and sat at home on bail on a first-degree murder charge for three years before he went to trial. And I had people in my jail charged with non-violent, low-level offenses who couldn’t post as little as $100 to get out. There is no justification for a system that allows people charged with murder to be able to pay their way out while people charged with non-violent offenses sit.

“Either you are a threat to public safety or you are not,” Foxx added. “Or you are a flight risk. That’s what bail was intended for and this [law] gives more transparency to that work.”

Despite the line separating proponents and opponents, Olson said “it’s important to keep in mind that everybody involved in this panel discussion and everybody who is involved in the passage of the legislation …  has the same goal.

“They want to see less crime, they want to see safer communities, they want a justice system that’s fairer, more transparent, more accountable and more effective. There may be differences in people’s views as to what’s the best way of achieving these goals but I don’t question anybody’s motives.”