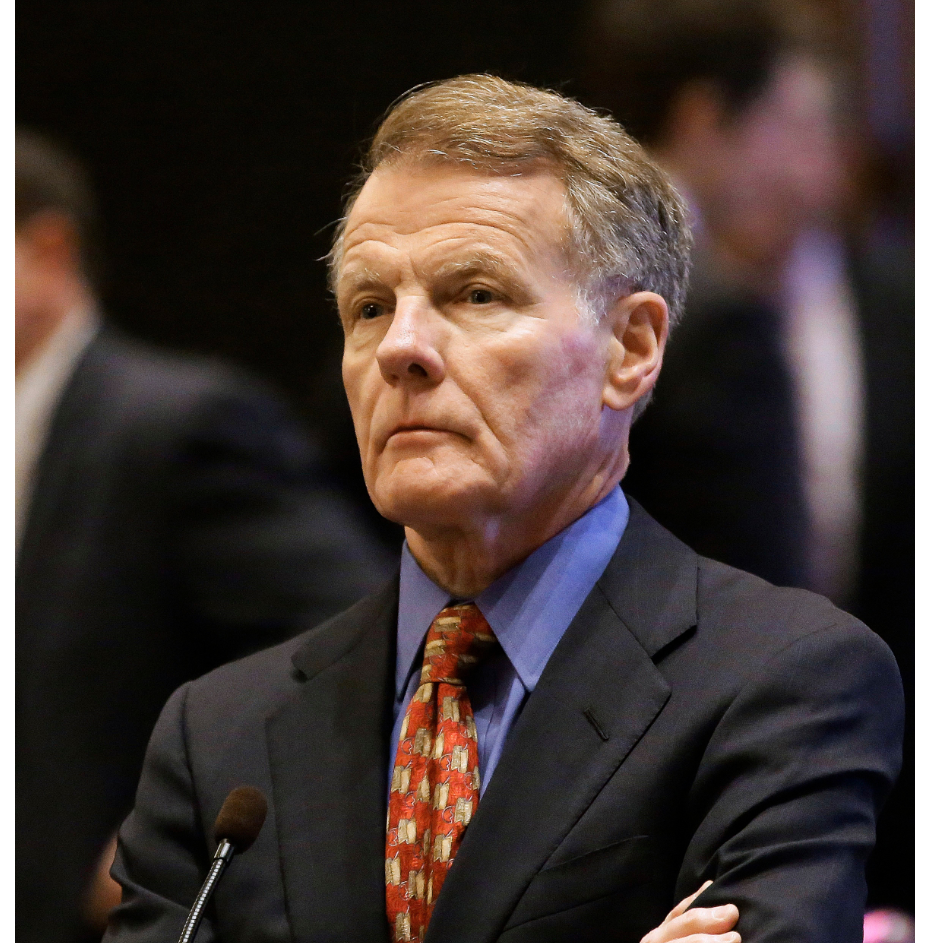 House Speaker Michael Madigan, a Democrat who has wielded the chamber’s gavel for two generations, is suddenly in the fight for his political life.

The speaker has been a central figure in Springfield for so long that his defeat could lead to momentous changes in the state capitol.

But perhaps the most significant development is already occurring: for the first time under Madigan’s tenure, rank-and-file House Democrats feel empowered to speak out against their leader.

“A solid coalition of Democrat House members now hold the power to remove the most powerful official in Illinois. It’s hard to imagine the speaker recovering and being able to serve another term,” said Susan Garrett, a former member of the IL House and Senate and current chair of the Center for Illinois Politics.

Garrett said the beginning of his troubles stretches back a few years to the reckoning brought on by the #MeToo movement. The revelation of sexual harassment and sexism at the statehouse led to the shakeup of Madigan’s government staff and his campaign team. In the process, lawmakers, especially a growing number of Democratic women in the House, began to speak out more frequently against the speaker.

“The speaker’s problems began when women in the House spoke up on the mistreatment of women at the Capitol. #MeToo empowered these women to demand a better working environment in Springfield. That new-found power continued to mount and came to a head with the ComEd indictments,” Garrett said, referring to corruption charges against several members of Madigan’s inner circle.

In addition, Madigan faces a host of other legal and political troubles that have weakened him in recent months.

Madigan is fighting off a federal corruption investigation into his close associates, a lackluster showing in this month’s elections, and a public reputation as one of the most unpopular public officials in the state of Illinois.

On top of that, the Democratic caucus Madigan leads has become bigger, more diverse, younger, more suburban and more liberal in recent years. It seems that their patience with the old-school ward boss from Chicago’s Southwest Side is growing thin.

At least 18 members of the 73-member caucus have now said they will not support Madigan’s efforts to lead the chamber next year. That would leave Madigan at least five votes short of the 60 he needs to retain the job. (Of course, that assumes that no Republicans would support him.)

“I don’t see how he can put it together,” said Charles N. Wheeler III, a former statehouse reporter who has watched and covered Madigan for 50 years. “I don’t see how these [legislators] are going to be able to successfully change their votes unless they decided they don’t really want to be in the General Assembly anymore. They may not even get out of a primary.”

For suburban lawmakers in particular, going back on a promise to vote against Madigan would be like “signing their own death warrant,” because the speaker is so unpopular there, Wheeler said.

Madigan’s reputation as a masterful tactician who could see problems coming around the corner took a big hit in the wake of the #MeToo scandals. The speaker essentially had to admit that he didn’t recognize the extent of the problems in his own staff, even though it was an open secret in Springfield.

In June 2018, Madigan ousted his longtime chief of staff, Tim Mapes, after a woman who worked for Mapes in the House clerk’s office accused him of harassment that was “often sexual and sexist in nature.” Mapes was also the House clerk and helped run the Democratic Party of Illinois, which Madigan controls. Mapes’ departure came after Madigan also fired a campaign worker for sexual harassment.

A 201-page report following up on Mapes’ removal, though, portrayed the speaker’s office as a place where Mapes oversaw almost all parts of the operation, often by instilling fear in employees.

“Very few workers in the speaker’s office have or have had interactions with Speaker Michael Madigan. In fact, many workers reported that they have never interacted with Speaker Madigan directly. They said that most of their interactions with top leadership would end at Timothy Mapes. Many people believed that Mr. Mapes was the only person who had direct access to Speaker Madigan,” former state Inspector General Maggie Hickey wrote.

The speaker said he took “responsibility for not doing enough previously to prevent issues in my office.”

The episode emboldened several of the growing number of women in the House Democratic caucus to criticize or confront Madigan. Rep. Kelly Cassidy, for example, publicly complained that she lost a part-time job with the Cook County sheriff’s office after criticizing Madigan for his handling of sexual harassment complaints.

Notably, among the Democratic representatives who said before the election they would not vote for Madigan to remain as speaker, almost all were women. (Cassidy was one of them.) And for the first time, women are set to become a majority of the House Democratic caucus.

More than half of the defections in the House Democratic caucus have come since the November election.

Democrats lost one state House seat when the dust settled on those campaigns, despite Madigan’s team vastly outspending their Republican opponents. The results were in line with Democrats’ experience nationally: despite hopes of a “blue wave,” Democrats in fact took over no new legislative chambers and, in fact, lost both the House and Senate in New Hampshire.

But Illinois Republicans made Madigan a central part of their messaging. The GOP, Wheeler said, has essentially portrayed Madigan as “the Darth Vader of Illinois politics.”

That prompted the governor and Illinois’ two U.S. senators – all Democrats – to encourage Madigan to relinquish his role as chair of the Democratic Party of Illinois. “The Republicans and the billionaires that sided with them were able to use the speaker as their foil and that hurt our ability, our state’s ability to get things done,” Pritzker said.

Then the U.S. attorney’s office in Chicago on Wednesday indicted Madigan confidante Mike McClain, former ComEd CEO Anne Pramaggiore and two other people in Madigan’s inner circle for participating in a bribery scheme. The prosecutors alleged that the four helped steer contracts, money and no-show jobs to Madigan associates, in order to curry favor with speaker on legislation the power company wanted passed.

The company itself agreed to pay a record fine of $200 million this summer to ward off prosecution, but the four defendants announced this week say they have done nothing wrong.

Madigan himself was not charged, and many doubt that he will be in any legal jeopardy. But politically, that might be a moot point. Legislators are citing the case in their decisions not to support the speaker for another term.

“The ongoing allegations surrounding Speaker Madigan have become a distraction from the important work before us during these unprecedented times. Therefore, I will not be supporting Speaker Madigan in his run for reelection as the speaker of the Illinois House of Representatives,” state Rep. Eva-Dina Delgado said in a statement. “Our state has some serious issues to address and now is the time for new leadership.”

Ironically, Democrats’ recent dominance in Springfield may also be a reason why so many Democrats have been willing to defy Madigan.

Democrats have controlled the Illinois legislature for nearly two decades, and they now command supermajorities in both the House and Senate. That is a marked shift from earlier in Madigan’s career, when Republicans regular competed for control of both chambers. Madigan, in fact, lost the speakership for two years following the 1994 elections, when Republicans won control of the Illinois House.

House Democrats rallied behind Madigan when they faced an existential threat, whether it was the prospect of Republicans taking over their chamber or Republican Gov. Bruce Rauner’s brazen attempts to destroy labor unions and weaken the Democratic Party in Illinois.

For the moment, though, those major threats have abated. House Democrats don’t need Madigan’s protection nearly as much now and, for many, Madigan is a liability rather than an asset in their own re-election bids.

Wheeler, who worked as a Sun-Times reporter and director of the public affairs reporting program at the University of Illinois Springfield before retiring, acknowledges that he has a more “favorable” impression of the controversial speaker than many people. But he says the same political shifts that have strengthened Democrats’ hold on the state – particularly their growing popularity in the Chicago suburbs – are also hastening Madigan’s demise. Eleven of the holdouts in the Democratic caucus are from the Chicago suburbs.

Wheeler said Madigan has survived for decades by adapting to changing circumstances, but there might be a limit to how much Madigan can do these days to keep up with the times.

“If somebody would have said to me back in 1970, when I first met Mike Madigan as a delegate to the constitutional convention, that this guy is someday going to vote and be instrumental in getting the law changed in Illinois to allow gay marriages, I would have just laughed. And yet I think Madigan played a role in that,” Wheeler said.

Now, though, Madigan has been around the Illinois legislature so long that the grandson of one of his mentors just got elected to the Illinois House this month.

“Some [House Democrats] may just look at it and say, ‘Here’s this guy. He’s going to be 79 in April. He’s totally out of step. He doesn’t even have a cell phone,’” Wheeler said. “It could be just a generational change. They look at Madigan and think of their grandpa.”

If Madigan resigned after the legislature’s lame-duck session in January, Wheeler added. “That would be a more dignified way for him to leave than for him to wind up not getting the votes and end up being a lame-duck speaker and backbench lawmaker.”

The speaker, of course, shows no intention of stepping down. He issued a statement Friday indicating that he will fight on in spite of recent events.

“The decision on the next speaker of the Illinois House will be made at a caucus, after a full discussion of the issues facing our state and the qualifications of the candidates,” Madigan said. “I plan to be a candidate for speaker, and today I confirmed that I continue to have support from a significant number of House Democratic caucus members.”