Illinois' Response to the COVID-19 Outbreak: A Brief Look Back 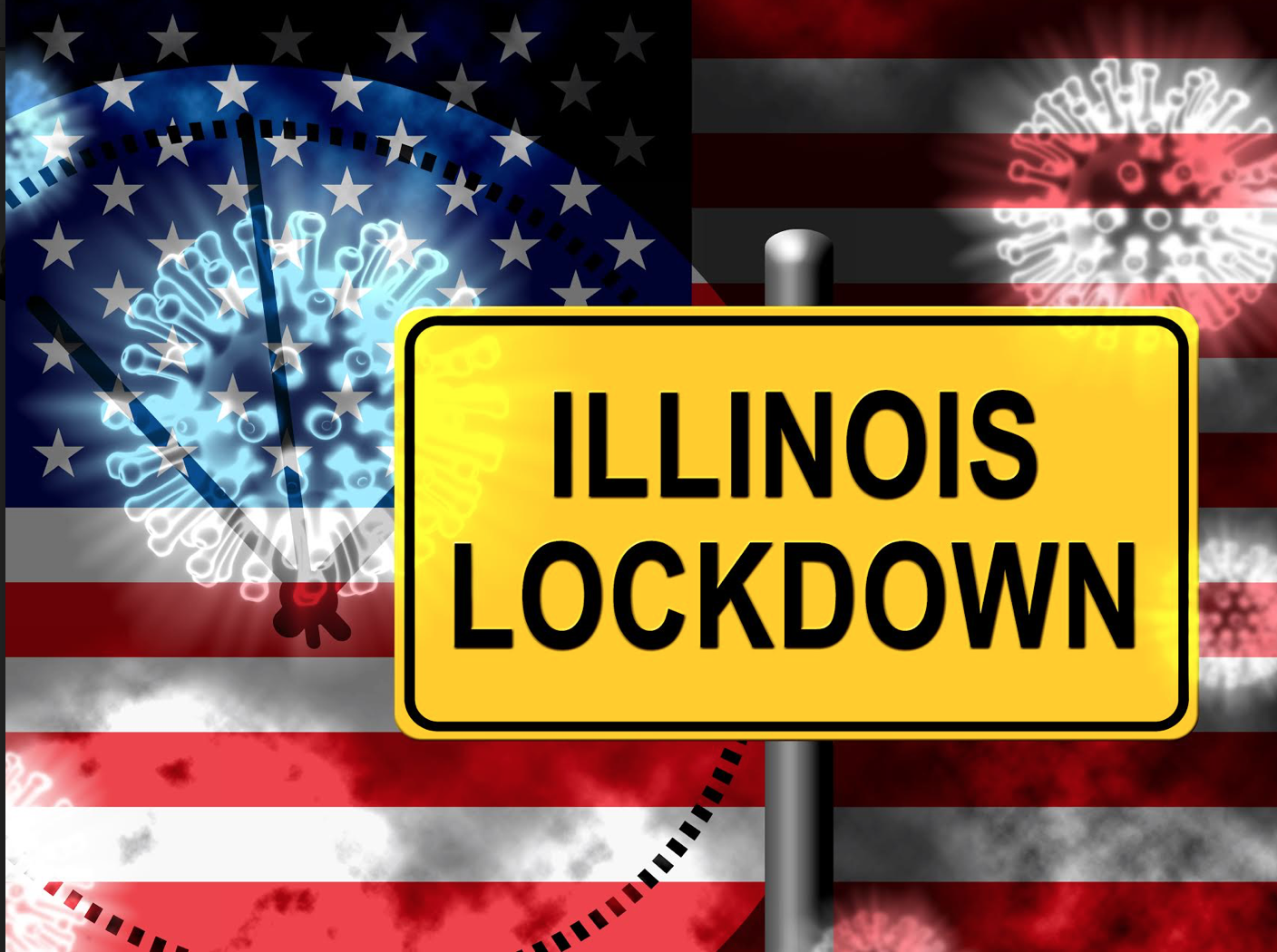 There’s no clear end in sight. More than a month after Governor J.B. Pritzker ordered Illinois’s nonessential businesses to shutter and residents to stay at home as much as possible, the state has become a major U.S. hotspot in the COVID-19 pandemic.

More than 27,500 Illinoisans have contracted the virus and more than 1,100 people have died, as of April 17th. (Current figures from the state are here.)

Only six states have more cases right now, and seven states and the District of Columbia have higher per capita death rates, according to The New York Times.

Illinoisans, like the rest of the country, are now confronting the real possibility that the pandemic could persist into and even beyond summer, further upending the state’s economy. The governor could extend his statewide stay-at-home order beyond April 30th; earlier this week he said he’d base his decision on data from public health experts.

Was the rapid rise in infections seen in the last few weeks inevitable, given Chicago’s position as a major transit hub and its high population density? How did Illinois public officials act to slow transmission of the virus, compared to other states?

It’s difficult to compare one state with another because all have had to respond while simultaneously gathering information about a novel virus to inform decisions, says Dr. Mark Dworkin, a professor of epidemiology and biostatics at the University of Illinois at Chicago. “That’s kind of like running a race while trying to study a map to determine what exactly is the route for this race.”

But in Illinois, he says, “we are fortunate to have some very highly experienced people in critical positions, including people trained by the Centers for Disease Control and Prevention in outbreak response and public health surveillance.”

Here’s a lookback at key decisions made since early March.

The first confirmed case of COVID-19 in Illinois was announced by state public health officials on January 24th. It was the second confirmed case in the entire country.

On March 9th, when there were 11 positive cases in Illinois, Gov. Pritzker issued a disaster proclamation to better prepare for the virus. He followed 13 other states in making this decision. Two days later, on March 11th, the World Health Organization declared a global pandemic. There were then 19 identified cases in Illinois, including new cases outside of Cook County.

By this point, public officials in Illinois and across the country were waking up to a disturbing new reality: With community transmission now apparent, it was likely that there were many more infected Illinoisans than tests had identified. It was at about this time that major disruptions to normal life began in Illinois and around the country. By March 12th, Washington, California, Oregon and Illinois had become the first states to ban large gatherings beyond 250 people.

Although a Chicago high school closed in early March after a classroom assistant tested positive, Chicago Mayor Lori Lightfoot had resisted a district-wide closure. But on March 13th, Gov. Pritzker overruled Mayor Lightfoot when he announced all public and private schools must close. Governors in Washington state, Florida and Virginia, along with leaders of major California school districts, took the same action the same day, joining five other states that had already ordered statewide closures. (New York City followed suit on March 15th.)

"I understand the gravity of this action and what it means for every community in our state," Pritzker said in a press conference. "This is the right thing to do, to protect our students and their teachers, school workers and parents."

At this point, there were 32 identified COVID-19 cases in Illinois, well below the number seen in growing hotspots like New York, California, Michigan and Massachusetts. Despite its school closures and ban on mass gatherings, Illinois held its primary as scheduled on March 17th, along with Florida and Arizona. (16 states have now postponed their primaries.) Ohio’s governor closed poll sites hours before they would have opened that day by declaring a public health emergency.

Chicago’s election board had asked Gov. Pritzker to postpone in-person voting across the state, but Gov. Pritzker said he “unquestionably” did not have the legal authority to do so. The claim was “mostly true,” according to the Better Government Association.

Two weeks after the primary, a Chicago election judge died of COVID-19.

By far, the most consequential and disruptive decisions made by elected officials during the pandemic have been orders to close nonessential businesses, orders for residents to stay at home as much as possible and a ban on gatherings of people. This is how widespread social distancing became the new normal.

Federal recommendations for staying at home, closing schools and avoiding discretionary travel, groups and bars and restaurants were first announced by President Trump on March 16th. He has never issued stay-at-home orders, instead leaving such decisions up to states.

Illinois was among the first states to take these drastic actions, which Gov. Pritzker ordered on March 21st. He did so before any municipalities in the state had—although Mayor Lightfoot took the moderate step of limiting bar and restaurant capacity on March 15th, during St. Patrick’s Day weekend. (She also canceled the holiday parade a few days prior.)

Pritzker was not the first governor to order business closures and people to stay home, however. That would be California’s Gov. Gavin Newsom, who took these actions on March 19th. (Pennsylvania also closed nonessential businesses on the 19th.) But the very first elected officials to issue stay-at-home orders were in the San Francisco Bay area, on March 16th.

Those early action likely contributed to successful mitigation efforts in California, experts say. Despite having the largest population of any state, and the country’s second-largest city, California’s per capita coronavirus death rate was 30th in the country as of April 15th, The New York Times reported. Its mortality rate is a fraction of what New Jersey and new York have experienced.

The early stay-at-home orders are “where the credit belongs,” said George Rutherford, a professor of epidemiology at the University of California, San Francisco.

Bottom line: Illinois state officials were at the leading edge of enacting social distancing measures, compared to the other 10 states hit currently hardest by the virus. New Jersey acted the same day; New York, Louisiana, Michigan and Massachusetts all followed suit by March 24th. The laggards were Texas and Florida. The former didn’t issue shelter-in-place and business closure orders until April 2nd, while the latter didn’t until April 3rd.

By that day, Florida had 9,585 confirmed cases, and Texas had 5,330. By contrast, when Gov. Pritzker issued the order on March 21st, Illinois had only 753 positive tests. No other state among the top 10 current hardest-hit states had fewer cases when shelter-in-place and business closure orders were issued.

It Could Have Been Much Worse

More than five weeks after the official start of the COVID-19 pandemic, much remains unknown about the nature of the coronavirus. But one thing is now clear: the data show that social distancing works—it flattens what would be an exponential curve of new infections and has saved lives.

But hindsight, of course, has a way of clarifying things. All state leaders were tasked with making unprecedented decisions about an uncertain threat in a fast-changing situation. As bad as recent weeks have been in Illinois, few have criticized Gov. Pritzker for not shutting down the state’s economy sooner. (Although he has caught flak from the business community about the economic crisis, and from state GOP leaders about his administration’s assistance to newly unemployed workers.)

“Amidst tremendous uncertainty, as a longtime resident of Chicago and Illinois, I’m grateful for our elected officials’ ‘all-in’ approach to responding to COVID-19,” she says. “Every day, Governor J.B. Pritzker and Public Health Director Dr. Ngozi Ezike deliver thorough and transparent updates that calm and reassure us. Mayor Lori Lightfoot does the same with her Public Health Director Dr. Allison Arwady, acting decisively on unpopular but necessary social distancing measures like closing parks.”

But the pandemic itself is in a sense just the first COVID-related leadership challenge. “Our region needs a strategy for #BuildingBackBetter,” Barrett says. Building resiliency and addressing disparities “will test all of us—government, civic, private sector, philanthropy—as never before. Will we have the political will and vision? The cost of getting this wrong is now painfully clear. We must execute a coordinated response on housing, economic development, transportation, and more, to correct past inequities.”