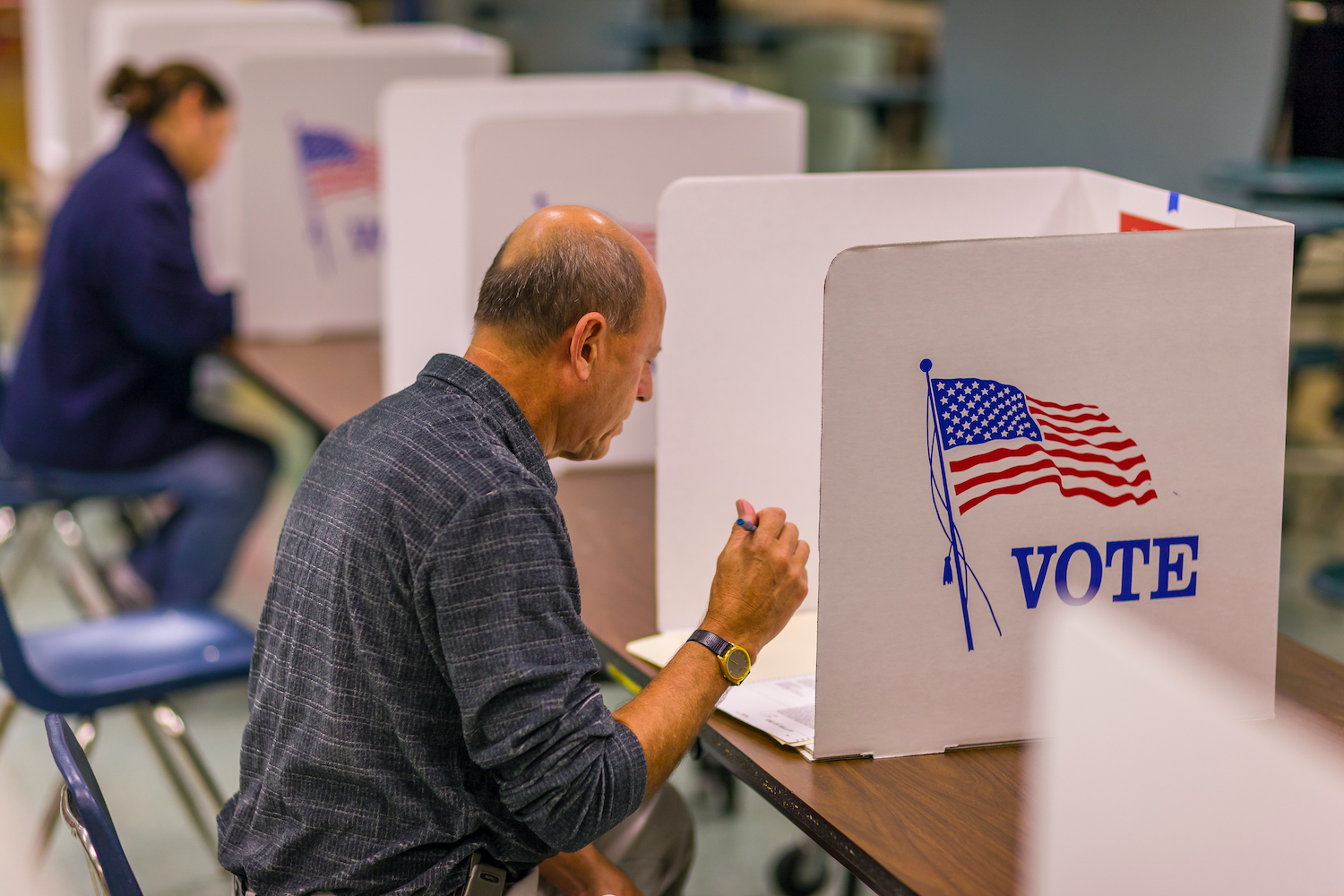 Without even being on the ballot, apathy was a big winner in the Illinois primary elections held late last month.

‍Despite meaningful races up and down the ballot – from governor to state Supreme Court vacancies to a bevy of U.S. congressional opportunities in a redistricting year – the great majority of Illinoisans opted not to exercise their political franchise.

‍Flesh-and-blood winners included Republicans aligned with presidential loser Donald Trump, suggesting a tilt to the right and away from the Jim Edgar-George Ryan tradition of the state GOP; and Jonathan Jackson, a son of the Rev. Jesse, in the pitched battle to succeed retiring U.S. Rep. Bobby Rush (D-1st).

Highlights of the primary races will follow in a moment.

But first: Turnout statewide for the June 28 election was estimated at 19.2 percent, the second-lowest since at least 1978 for a primary held during a gubernatorial, rather than presidential, voting year. That means it’s likely the second-lowest midterm primary turnout of all time, given that we are generally much worse than our ancestors at traditional civic responsibilities.

‍Having fewer than one in five registered voters vote this year was something of a surprise to veteran state political observers.

Considering the volume of TV advertising in the Republican race to challenge incumbent Democratic Gov. J.B. Pritzker, “I would have expected we’d come out somewhere around the 27 percent midterms average” over the past four-and-a-half decades," said Matt Dietrich, public information officer for the Illinois State Board of Elections.

“And look at what that day was,” said Dietrich, who tabulated the turnout estimates that he does not expect to change much when the election results become official July 29. “Statewide it was a perfect day. A March primary, it can be cold, rainy, snowy.”

Legislators moved the primary to June this year because the COVID-19 pandemic delayed tabulation of U.S. Census data. And while that may have disrupted some folks’ historical voting patterns, “I thought that perhaps the better weather might help get more people out,” Dietrich said. “But, nah. None of that seemed to come to pass.”

How did those who did turn out – or, increasingly, vote by mail or vote early – cast their ballots? Here are some key races:

‍Pritzker cruised to victory against Chicago West Side activist Beverly Miles. The real action was on the GOP side, where Aurora Mayor Richard Irvin spent heavily – with $50 million in backing from billionaire Ken Griffin – to try to persuade Illinoisans he was centrist enough to beat Pritzker.

But Republican voters opted for the more conservative downstate farmer-legislator Darren Bailey, signaling they’re not interested in centrism, or, perhaps, in recent party converts, or in billionaires trying to buy elections.

In any event, Bailey, who won the coveted Trump endorsement, dominated, taking 58 percent of the vote. Irvin limped past the line in third place, at 14.9 percent, also trailing the somewhat mysterious, cryptocurrency-backed Jesse Sullivan (15.7 percent). https://www.chicagotribune.com/news/ct-jesse-sullivan-republican-illinois-governor-candidate-20211015-jv32zi25ajah7c4e3aulktqd2q-story.html

‍And Ken Griffin, even before the voting but after polling showed his man far behind, announced he and his company are moving out of Illinois.

‍Apparently you can contend for this office without having a tumbling team, ala six-term incumbent Jesse White, whose impending retirement opened a big door in statewide politics. Secretary of State, remember, is a traditional stepping stone to higher office in Illinois.

‍On the Democratic side, former state Treasurer Alexi Giannoulias easily defeated Chicago City Clerk Anna Valencia and two others, taking almost 53 percent of the vote. Valencia had the backing of the state’s top Democrats, but Giannoulias – whose own ethical questions relating to his failed family bank are further in the past – hammered away at whether Valencia kept enough distance between her husband’s lobbying work and her civic role.

‍Two seats are up for grabs this year, which gives the Republicans a shot at control of the court if they win both.

The 3rd District race will pit current interim justice Michael Burke, a Republican, against Mary Kay O’Brien, a Democrat and an Appellate Court judge representing Ottawa since 2003. Both ran unopposed.

In the 2nd District, where multiple candidates vied for each party’s nomination, the Democrats chose Lake County Judge Elizabeth Rochford, the only candidate in her field rated “highly recommended” by the Illinois State Bar Association.

‍‍Former Lake County Sherrif and U.S. Senate candidate Mark Curran claimed victory on the Republican side as his slim election-night lead of 1.44 percent in a four-person field grew. New results posted after the July 4th holiday – which would include the arrival of mail-in ballots – boosted his lead over Lake County Judge Daniel Shanes to 1.7 percent, according to the Lake County News-Sun.https://www.chicagotribune.com/suburbs/lake-county-news-sun/ct-lns-updated-election-results-st-0708-20220707-y7r6zr2lgjaxfch7qmi6civxkq-story.html‍

‍Two House races on the Democratic side and one on the Republican were especially closely watched, as was the Republican Senate battle to challenge incumbent Sen. Tammy Duckworth.

‍In the heavily Democratic 1st U.S. House district on the South Side and into Will and Kankakee Counties, construction company owner Jonathan Jackson mustered no majority at 28 percent of the vote. It was, however, enough to win easily, as 17 Democrats were vying to succeed 30-year incumbent Bobby Rush.

‍Incumbent Democratic Reps Sean Casten and Marie Newman got hit by redistricting. With her home placed in Rep. Jesus “Chuy” Garcia’s new 4th district, Newman opted instead to challenge Casten in the 6th, which runs from the Southwest Side of Chicago into Cook and DuPage Counties.

Between the residency issue, a U.S. House Ethics Committee investigating Newman’s hiring practices, and the death two weeks before the election of Casten’s 17-year-old daughter Gwen of unspecified causes, Casten more than doubled Newman’s vote tally, with some 68 percent of the vote.

‍The only redistricting set-to in the other party pitted first term MAGA Rep. Mary Miller against the less extreme five-term Rep. Rodney Davis. Miller opted to challenge Davis in the central and western Illinois 15th District, rather than the incumbent in the new district her home landed in, Rep. Mike Bost.

Although Davis could boast of being a Trump re-election co-chair, it apparently wasn’t enough to overcome the actual Trump endorsement that Miller earned amidst gaffes that included qualified praise of Hitler and a vote not to certify the 2020 presidential election results. Miller beat Davis by 58 to 42 percent.‍

‍In the Republican Senate race, lawyer Kathleen Salvi of Mundelein, who has run unsuccessfully for the U.S. House in the past, won the right to face off against Duckworth in November.