Ethics reform in Illinois: Slow going, but not for lack of trying 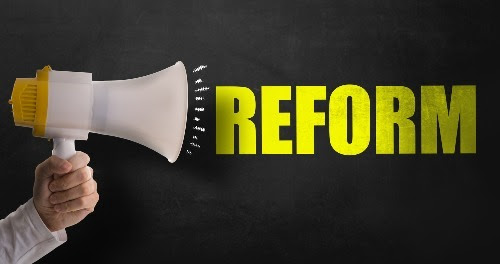 Over the past month, the Illinois General Assembly and Governor Pritzker passed and approved two major ethics reform bills. One requires the state to better track lobbying activities among registered lobbyists and lawmakers. The other creates a Joint Commission on Ethics and Lobbying Reform, which we’ve covered before. The two bills were passed following three separate cases of misconduct by state lawmakers, and although seen as a good first step, not everyone was impressed with the measures.

As any Illinoisan can guess, Illinois lawmakers Arroyo, Sandoval and Cullerton are not the only pols to make … “questionable” ethical decisions. Here at the Center, we’ve talked a lot about our state’s history with such behavior, from convicted governors to ComEd’s lobbying clout in Springfield, and for good reason—there’s so much to talk about.

Ethics reform in Illinois (like many other things) is slow going, but not for lack of trying. When taking a look at this past session alone, it becomes clear that lawmakers in Springfield do acknowledge the need for ethics reform in government. In fact, dozens of bills were introduced since January proving as much, yet the overwhelming majority of these initiatives didn’t make the cut.

This week, we examined these bills. Here’s what we found:

These were the initiatives directed at several reforms:

Since the beginning of this legislative session, state reps and senators have introduced 89 bills about ethics reform. Only four of these measures passed both chambers or became Public Acts. These do not include appropriation bills or bills that made small changes to existing legislation, like changing titles or section headers.

Over half of these bills proposed changes to three existing laws: the Lobbyist Registration Act (LRA), the Illinois Governmental Ethics Act (IGEA) and the State Official and Employee Ethics Act (SOEEA). All three are integral to the state’s current ethics climate.

Many of the bills offer measures similar or even identical to one another. House Bills 869 and 351, both introduced in January yet stuck in the House Rules Committee since March, propose ten-year limits on House leadership positions.

Let’s look at some of these bills

Who is introducing these bills?

Where bills go to die

As mentioned earlier, almost all of these bills are stuck in committee, specifically two committees: the House’s Rules Committee and the Senate’s Assignments Committee. These fulfill the same function in their chambers.

A re-vote usually doesn’t happen, so the bill is basically dead. Of the 89 bills on ethics proposed, 36 were referred to and remained in the Rules/Assignment Committee. When considering this, it actually makes sense that some of the bills we’re discussing are similar or identical. It could be easier to introduce a “new” bill rather than wait for Rules or Assignments to move an existing bill along.

However, this isn’t the end of the story. There is a way out of legislative purgatory through “re-referrals” thanks to House Rule 19(a) and Senate Rule 3-9(a). According to these rules, bills stuck in Rules/Assignments are introduced to the committee again if they’re here for too long. (“too long” meaning they aren’t assigned a committee before a deadline established by the House Speaker or Senate President.) Sadly, many of these bills are stuck in Rules or Assignments again: 37 of the 89 bills were re-referred with no committee assignment happening afterward.

Optimism may not come easily after reading what we just shared. Afterall, only 6% of the bills we discussed actually made it through both chambers. If anything, this fact reinforces the need for the new Joint Commission on Ethics and Lobbying Reform to take action, sooner rather than later.