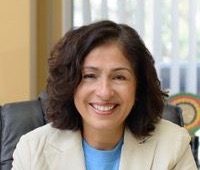 Just one month after being elected to the Democratic Party State Central Committee for the first time, State Rep. Elizabeth Hernandez found herself elevated to Party chairman, the first Latino to lead a major political party in Illinois.

Hernandez has enjoyed a long career in elective politics at the state level. A Cicero resident, she was elected to the Illinois House in 2007 and is currently an assistant majority leader on House Speaker Chris Welch’s team. She worked as a senior policy advisor for Pat Quinn when he was lieutenant governor. Hernandez also spent 17 years at the Cicero public schools, where she managed the district’s educational grant program.

But less than three weeks before she successfully ousted the former party chair, U.S. Rep. Robin Kelly, from the office in a July 30 vote of the state central committee, Hernandez wasn’t even thinking about the position.

Recruiting Hernandez was perhaps the final step in Gov. Pritzker’s more than year long campaign to take no-doubt-about-it control of the Illinois Democratic Party, after former House Speaker Mike Madigan was forced out as chair following indictment his on federal corruption charges.

Former Senate President John Cullerton, who’s also a state central committeeman, said Pritzker told him of his interest early on. “The Governor called and said ‘Madigan might be retiring; I’d like to have something to say about who might be chairman of the party,’” said Cullerton. “When Joe Biden got elected President, nobody got angry that he picked this guy Jamie Harrison from South Carolina to be party chairman. So I wasn’t offended when the governor wanted a say.”

But Pritzker didn’t give up. He did what passionate billionaires do. He spent money.

Through his campaign committee, Pritzker donated $350,000 to seven candidates running for state central committee. Six got $55,000 each. Three of Pritzker’s handpicked candidates won. But injecting that amount of cash into these previously low-key campaigns didn’t sit well with some Democrats.

“I expressed concern that what would be a kind of grass roots process, where people could listen to both candidates and hear what each would have to say for the future of the Democratic Party, was being influenced by money, ” said State Rep. Will Davis, a state central committeeman from the south suburbs. “The Governor gave that money to individuals running for state central committee with the commitment that they would support his candidate, Lisa Hernandez.”

Kelly’s supporters gave her high marks for decentralizing the party, making it more diverse and inclusive, and bringing the central office into the 21st Century through the use of modern technology to keep party officials all around the state informed about party policies and activities.

Yet, Pritzker objected to Kelly as chairman because as a federal office holder, she is subject to strict rules which limit the amount of fundraising she can do for non-federal candidates. Kelly’s team said they devised a legal workaround that allowed her to effectively raise money, but Pritzker wasn’t buying it.

“If you look over the last 16 months, you see it hasn’t worked, ” said Pritzker.

“She went along for a year and barely raised any money, ” said Cullerton. “You could say she raised about $800,000, which is nothing, so that was a problem. Even without the governor dumping in money they should have raised $10 million, maybe $15 million. You could even go national, say Illinois Democrats are protecting a woman’s right to choose in the Midwest. Get people to send $15 or $25. It wasn’t about Robin not being a nice person. It wasn’t about anything other than her having this legal impediment.”

Kelly’s supporters aren’t sure there’s a windfall coming. “We don’t know how well Rep. Hernandez will do it because she hasn’t really started yet, ” said Rep. Davis. “But if the reasoning is correct, that we need to make a change to facilitate fundraising, then I anticipate absolutely no problems with fundraising with a new leader. None whatsoever. Money should be pouring in.”

Pritzker’s preoccupation with party fundraising hardly stems from personal need. He didn’t require the party’s help to defeat Republican Gov. Bruce Rauner in 2018. Pritzker dipped into his $3 billion fortune to spend a record $172 million to win the office. Facing what appears to be a substantially weaker candidate in November, GOP State Sen. Darren Bailey, Pritzker would seem to have no worries about funding his re-election run, either.

Despite being aware of the power of his personal wealth, Cullerton reasonably asks when it comes to Democratic party funding, “Why should Pritzker be the only one that contributes?”

Still, Rep. Hernandez’ run for party chair might have come up short if not for the intervention of U.S. Rep. Jesus “Chuy” Garcia. The Congressman swung four Hispanic state central committee members, including himself, into Hernandez’ camp. The others were State Rep. Delia Ramirez and State Senators Cristina Castro and Omar Aquino.

“Prior to the vote, it was my understanding that Rep. Garcia was going to support Kelly, ” said Rep Davis. “Along with at least one other Latino member.”

For now, the new leader of Illinois Democrats is lying low. Through a spokesman, Rep. Hernandez declined our interview request, saying “she’s focused on getting integrated into operations so Democrats can be well-positioned in November.

The unspoken, yet very real concern among some Democrats, is that the party is returning to an unhealthy era of one man control, with Pritzker and his subordinates taking the place of Madigan.

“I guess that remains to be seen and we’ll know fairly quickly, ” said Rep. Davis. “Not only the effort to raise money but then determining how to spend it. If it’s about supporting incumbent Democrats then we’ll know fairly quickly if there’s going to be a resurgence of dictator-style rule.”Cullerton sees it differently. “There’s an opportunity for someone who can go out and fundraise legally, a chairman, to go out and make it a national effort to raise money for the Democratic Party in Illinois, ” said Cullerton. “We’ve never done that. When Madigan was chair, he only raised money for House Democrats. This would be for the lower-level candidates – the sheriffs and county clerks in the marginal counties downstate. Robin couldn’t do that legally. So of course Elizabeth’s going to raise more than Robin did. Almost by default.”