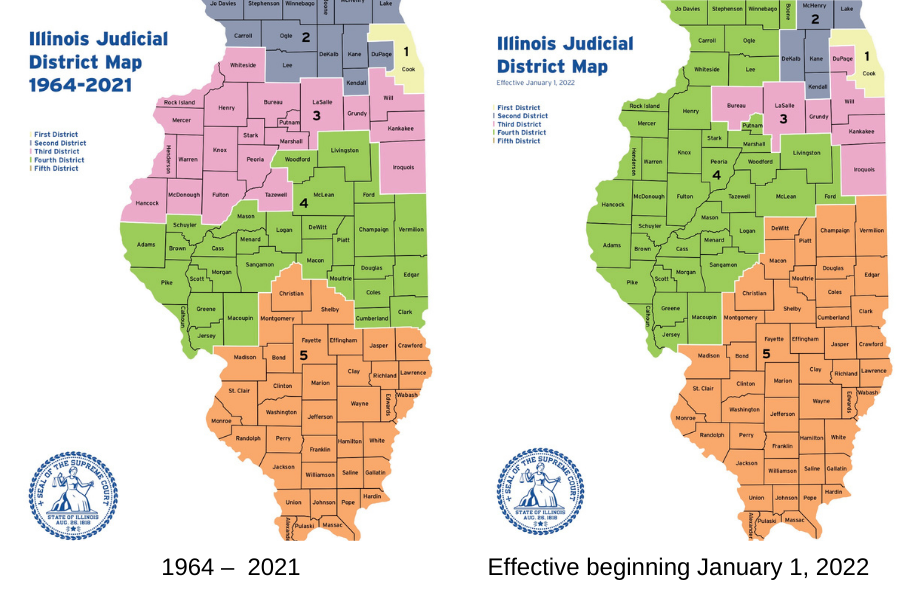 For the first time in more than half a century, Illinois voters this fall will be electing Supreme Court justices from redrawn judicial districts, part of an overall trend that has seen the high court seats become increasingly the object of high-stakes politics.

“Things are a little less sleepy in the court races than they once were,” said Chris Mooney, W. Russell Arrington Professor of State Politics at University of Illinois Chicago. “We’ve got two seats up this term, and redistricting, and we had one guy ousted last go on a (failed) retention vote.”

Illinois politics being what they are, all of those factors are interrelated. The two Supreme Court seats up for grabs beginning with the June 28 primary are being chosen in the new 2nd and 3rd Judicial Districts made up of the counties surrounding Chicago and Cook County, plus a handful more to the immediate west and south.

If Republicans win those two contested races, the balance of power on the state’s highest court would tip to the GOP and give the party a significant victory in a state where it is a weak minority in the legislature and hasn’t held the governorship since Democrat J.B. Pritzker took office in 2019.

That could give Republican viewpoints a chance to take hold on issues that may come before the court ranging from judicial rulemaking and the constitutionality of laws to the state’s ongoing issues with unions and pensions to the potential for the U.S. Supreme Court to kick significant national issues back to the states.

But a Republican victory and shifting high court influence, of course, are very big ifs.

For one thing the Illinois Supreme Court – despite an increasing amount of outside money being spent on its elections and retention votes in recent years – has not been the political animal that critics say its United States counterpart is becoming.

“The thing about the Illinois Supreme Court is that it’s not an activist, ideologically driven court, historically,” said Mooney. “The state Supreme Court has done its best over the years to be very conservative, with a small c. That means it's not about changing policy. It's not about, you know, imposing some ideological test on things. It's trying to find the easiest way, the simplest way, to resolve a case.”

And the other, even bigger factor determining the size of that conditional – the very biggest if – is that these districts were drawn by Democrats with a vested interest in Democratic rule.

Under no compunction to do so, the majority party decided to redraw the state’s four judicial districts outside of Cook County in 2021, and they did not do so with the idea of ceding control of the 7-person court (although they did also partly rebalance the relative numbers of voters in each).

That was the first time an Illinois Supreme Court judge failed to get the 60 percent approval necessary to serve for another 10-year term, under the state’s quirky rules meant to mitigate the partisanship inherent in electing judges. It was a potentially Pyrrhic victory for Griffin and his allies.

Rather than simply accept an open seat in a Republican-leaning district, “Democrats looked at that situation and said, ‘Time for another map,’” said Redfield, an emeritus professor of political science at University of Illinois Springfield.

Redfield notes that there have been enough population shifts since the previous maps were drawn in 1964 to at least partially justify redoing them. “It doesn't have to be an either-or sort of thing,” he said. “It was political, but it also does reflect some basic democratic values in terms of equalizing population.”

So the two districts being contested in 2022 are the ones specifically designed to be politically competitive races, on the theory that a pair of contested districts will give Democrats two chances to win a fourth Supreme Court seat to join the all-but-guaranteed three that the state constitution says must come from the 1st Judicial District, heavily Democratic Cook County.

“If voters would have retained Kilbride, this wouldn’t have been an issue until 10 years from now,” said Redfield. “So Democrats set it up so that they have two districts that give them two shots at getting the fourth vote, essentially. This is about control of the Supreme Court.”

Ann Lousin, professor of law at University of Illinois Chicago Law School, is more blunt: “I know somebody very deeply involved in that campaign to get rid of Tom Kilbride, because they wanted it to be a Republican seat again,” she said. “When I see him again, I'm going to say, ‘Listen, guys, you may end up with five Democrats and two Republicans by 2024. Are you happy?’”

Still, it is hard at this point to have any kind of handle on what will happen in the heavily contested 2nd District, a northeastern Illinois territory made up of Lake, McHenry, Kane, DeKalb, and Kendall Counties. Based on previous elections, it does appear to lean blue, but not in the way that Cook County leans blue.

Four Republicans and three Democrats are vying to win their parties’ nominations for the seat, but to this point there does not appear to have been any polling made public. “I have not been able to find out who the favorites are in the Democratic and Republican primaries,” Prof. Lousin said.

For a time this spring it appeared that three of the hopefuls would be kicked off the ballot for apparently having too few signatures on their nominating petitions. But a Cook County Judge ruled that the Illinois State Board of Elections essentially had been too harsh in its interpretation of the number required to qualify. In May, she ordered back onto the ballot Democrat Nancy Rotering, the Highland Park mayor and a former candidate for Congress and Illinois Attorney General; and Republicans Susan Hutchinson, a state Appellate Court judge from Crystal Lake, and Mark Curran, a former Lake County sheriff.https://www.chicagotribune.com/politics/elections/ct-supreme-court-ballot-flight-20220513-paylzp2bq5cfxp6xzhp6qi6moq-story.html

‍The Democrats joining them in the quest for that seat are Judge Rene Cruz, who presides over Kane County’s traffic and misdemeanor division after eight years in family court, and Elizabeth Rochford, a Lake County associate judge in probate court.

The new 3rd District now covers DuPage and Will Counties on the border of Cook, plus Kankakee and Iroquois to the south, and Grundy, LaSalle, and Bureau to the west.

The only Republican on the ballot, Michael Burke, is the interim 2nd District Supreme Court justice, having been appointed when Justice Robert Thomas, the former Chicago Bears placekicker, retired from the bench in early 2020.

But when DuPage County, where Burke lives, moved from the 2nd District to the 3rd under the new map, Burke’s election run shifted to one for the seat formerly held by the vanquished Kilbride.

The 3rd District’s current justice, Democrat Robert Carter, was an interim jurist picked by the Supreme Court to hold the seat until the next election following Kilbride’s retention vote defeat.

The Democrat on the 3rd District ballot is Mary Kay O’Brien, from Essex, a former state legislator and an Appellate Court judge representing Ottawa since 2003.

In the new map, the 3rd District shifted from having a 55-45 Republican edge, according to how people voted in past elections, to a slimmer 51-49 lead, John Pastuovic, president of the Illinois Civil Justice League, told the Chicago Tribune in 2021. https://www.chicagotribune.com/politics/ct-illinois-supreme-court-redistricting-20210525-5bdeyxbx3ffs7j3bllrkzuku7a-story.html

‍The court’s new 4th and 5th districts – very roughly speaking, made up of western Illinois and southern Illinois, respectively –  show the Democrats who drew the maps bowing to the new realities of electoral politics. They look to be locks for the Republican Party for the foreseeable future, given the GOP’s increasing hold on rural voters.

The 2nd District primary is one to watch. If the 3rd District remains Republican, the 2nd District will determine if Democrats or Republicans have a majority on the Illinois Supreme Court. The stakes are high.

Illinois’ Attempt to Change School Testing is Pushed Back, for Now