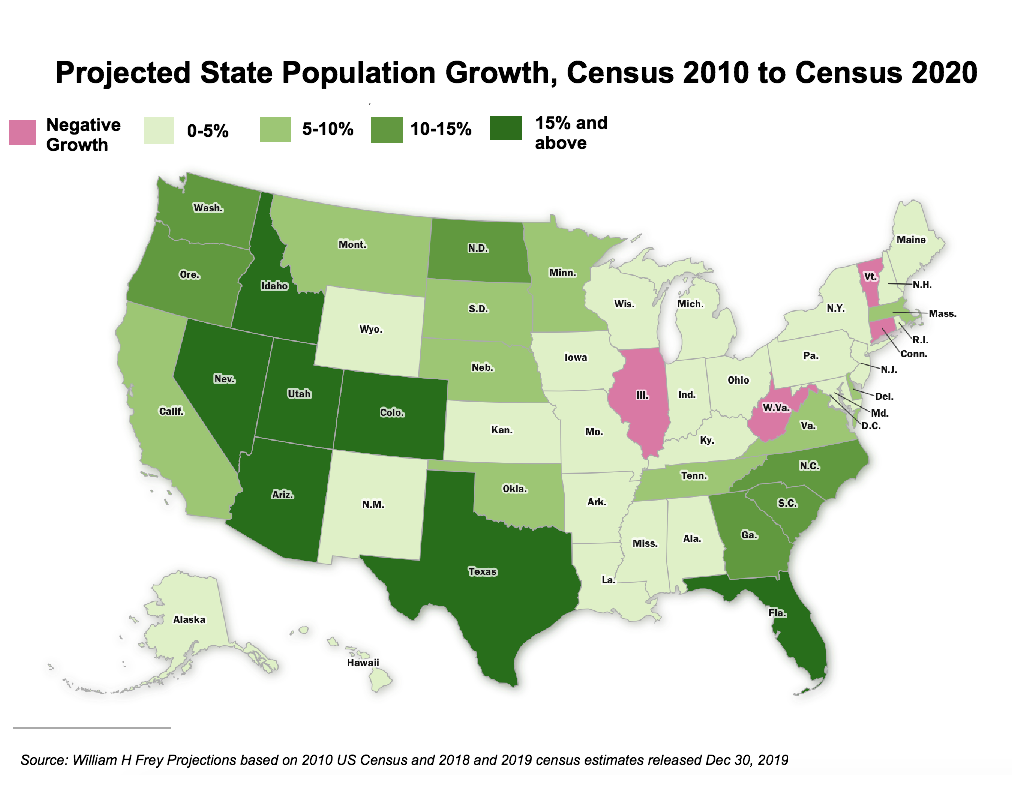 It’s no secret that Illinois is likely to lose one of its eighteen congressional seats once the 2020 census results are in. It was reported this past December that Illinois has yet again seen a decline in population, making it six straight years that we have been seeing this pattern. According to a study conducted by the Brookings Institution, we are likely to share a negative population growth rate with three other states:  Vermont, Connecticut and West Virginia.

2013 was the last year Illinois saw an increase in its population, reaching nearly 12.9 million.  Since 2014, however, Illinois has experienced a decline in population from its high of 12.9 million to around 12.65 million - a net loss of nearly 250,000. The reasons for this are a topic for heated debate. Whether due to high taxes, corruption, or the climate, one thing is clear: Illinois will again lose representation in the United States Congress. Other Midwestern states will likely also be affected due to minimal growth rates, particularly Michigan, Minnesota and Ohio. Meanwhile, Texas and Florida are expected to gain the most seats (three and two, respectively) due to a decade of steady population growth in excess of 15%. In Illinois, the population declined by 1.5% during that same time period.

Congressional Seats and the Census

The U.S. Constitution mandates a decennial census. The census is used to determine representation in the US House of Representatives and, among other things, to determine Federal funding for state programs. Today, Illinois has 18 seats in the House  (13 Democrat, 5 Republican), with each of them representing approximately 745,000 people. So with a population loss of just under 200,000 between 2010 and 2020, Illinois is guaranteed to lose at least one seat. However, Illinois has, in addition, historically faced undercounting of its population. As an example, in the 2010 census, 19.3% of the state’s population did not respond to the census. According to a study by Election Data Services, Illinois is expected to end up with a count of approximately 12.63 million people in the 2020 census. That would mean we are just 126,000 people away from losing a second seat.  And if undercounting is severe, the state could very well lose that second Congressional seat. Illinois has pumped $29 million in State money to help ensure they get a complete count.

Who Loses: Do Republicans or Democrats suffer from this loss?

It goes without saying that a decrease from 18 seats to 17 (or 16) means that there will be one (or two) fewer Republicans or Democrats representing Illinois in Congress. The question remains, which will it be?

John Jackson, from the Political Science Department at Southern Illinois University (SIU) believes the one seat will certainly be lost downstate. As he points out, Congressional Districts 15 (R), 12 (R), and 13 (R) (all downstate) are likely to have had their population shrink the most - and congressman John Shimkus, the Republican incumbent for District 15, has already decided not to run for reelection. With Democrats in control of the state legislature, they will be the final deciders of the upcoming round of redistricting that will follow the dissolution of one or more of Illinois's congressional districts, even though Republicans will also get input. Since the Democrats are unlikely to sue for the elimination of one of their own incumbents, we expect that it will indeed be the 15th District currently held by Shimkus that will disappear, with Republicans thus losing one more seat in the House of Representatives.

Political Science Professor Christopher Mooney at University of Illinois Chicago (UIC) has a similar opinion: “With further population losses, the Democrats in charge of the statehouse might not be able to draw a potentially Democratic district downstate. There just might not be enough Democratic voters down there.”  In 2012, Democrats set up two downstate Congressional Districts (12 and 13) that had the potential to go Democrat under the right conditions. “Even if Democrats win the 13th in 2020 (before the new map is implemented) the Dems are going to have a tough time finding enough D voters to win it in 2022. If they try to pack D voters in a single downstate district, we can expect to see a weirdly shaped district emerge in search of Democrat downstate voters.”

As for the unlikely loss of a second congressional district, Mooney points out that Illinois could see a loss in the Cook/Collar-County area. Democrats have made major inroads in the once solid R counties outside of Cook (DuPage, Lake, McHenry). If the Democrats keep their hold over those areas (districts 6 and 14) after 2020, then a loss of a second seat there will hurt Democrats. If not, then it could hurt Republicans.

Ultimately we can safely say if one seat is lost, it will most likely be a GOP seat. However, the loss of a GOP seat in Illinois may very well be off-set by a new one forming in a more Republican-leaning state that has had a significant population growth. Texas, which may gain three new congressional seats after the 2020 census, being the prime example.