Why JB Pritzker Wants to Be on TV Across America 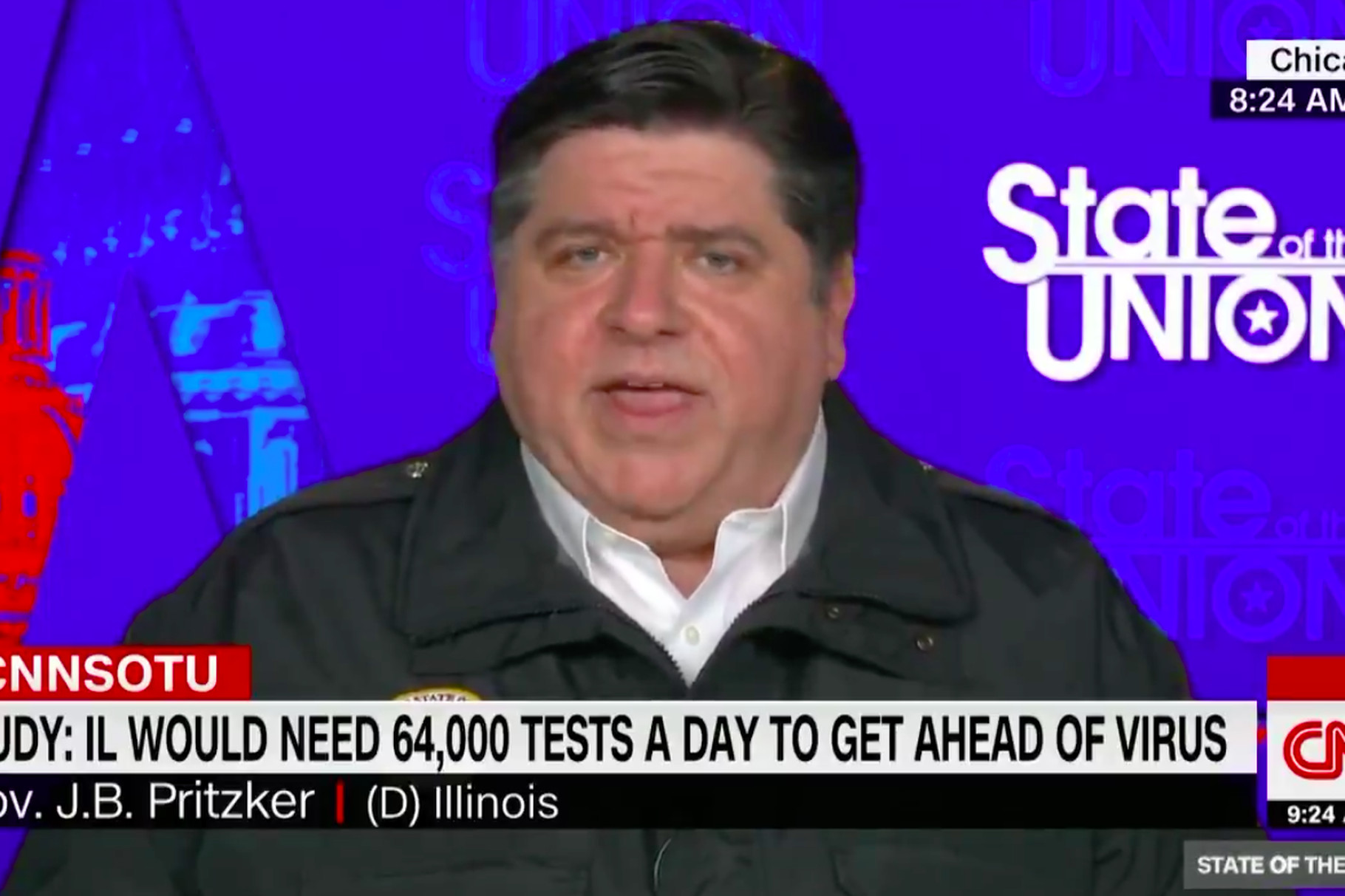 When Illinois Gov. JB Pritzker grew alarmed that major crowds were forming at O’Hare International Airport in the early days of the state’s coronavirus outbreak, he took to Twitter to chastise President Donald Trump and Vice President Mike Pence.

The crowds had formed because there weren’t enough federal agents available to clear passengers returning from Europe since Trump suddenly invoked severe restrictions on travel from the continent to reduce the spread of the disease. Pritzker wanted Trump and Pence to dispatch more federal agents to deal with the crowding.

“Since this is the only communication medium you pay attention to—you need to do something NOW,” Pritzker tweeted.

But the governor was wrong. While Trump certainly uses Twitter to broadcast his messages, he doesn’t often get into back-and-forth conversations on the platform. In fact, much of what the president says on Twitter seems driven by what he sees on cable news and national TV shows.

Pritzker found that out firsthand the next week. Trump slammed Pritzker by name on Twitter after the governor criticized Trump on a Sunday morning show on CNN.

“.@JBPritzker, Governor of Illinois, and a very small group of certain other Governors, together with Fake News @CNN & Concast (MSDNC), shouldn’t be blaming the Federal Government for their own shortcomings. We are there to back you up should you fail, and always will be!” Trump wrote.

The governor got in the last word in the exchange. “Get off Twitter & do your job,” he wrote back to the president.

At his daily press briefing, Pritzker admitted that he was “finding it hard to contain his anger” at the president. But he had found a way to make sure his complaints registered with Trump.

“Apparently the only way to get the president of the United States to pay attention is to go on national television and make noise about it, which I won’t stop doing until we get what we need,” Pritzker told Illinois reporters later that day. “This is a time for serious people, not the carnival barkers that are tweeting from the cheap seats. All I can say is, get to work or get out of the way.”

And a little more than a day after Pritzker appeared on CNN, he was on a phone call with the president. The governor said Trump was "very responsive" to his requests for medical supplies and promised to work on it.  The White House then announced it would send 300 ventilators and 250,000 masks.

Throughout the coronavirus crisis, Pritzker has kept up a presence on national TV outlets, as have many of his fellow governors, as well. That’s allowed him to put pressure on the Trump administration to help the state of Illinois, communicate with more Illinoisans and raised the governor’s national profile. But it also means that Pritzker is an easy target for the president, which could undercut the governor’s standing among Republican Trump supporters.

“When I do go on TV, it’s most often been because I think I need to get the attention of federal authorities or the White House to make sure [they know] we’re waving our arms in the air here in Illinois,” Pritzker told me. “If they see a political problem, maybe they will respond to it. And that has been effective.”

Between the beginning of March and the second week of May, according to the liberal group Media Matters, Pritzker has appeared on cable TV shows six times. That was four times on CNN and twice on MSNBC. He did not appear on Fox News. Pritzker also appeared on Sunday morning network shows, including NBC’s “Meet the Press” and CBS’s “Face the Nation.”

That’s certainly more often than national audiences are used to seeing Illinois sitting governors (disgraced former-governors-turned-reality-TV-participants are another story). But Pritzker is hardly an outlier among governors who have turned to national TV outlets during the pandemic.

In fact, according to Media Matters, which monitors news outlets for what it calls “conservative misinformation,” Democratic governors have been featured in 250 cable TV segments since March.

The governors in the New York area dominated the list. That’s hardly surprising, considering it is both the de facto media capital of the country and the region hardest-hit by the coronavirus. New York’s Andrew Cuomo appeared 50 times: 27 on CNN (where he frequently appeared as a guest on the show of his brother, Chris Cuomo) and 23 on MSNBC. Gov. Ned Lamont of Connecticut wasn’t far behind, with 43 interviews, while New Jersey Gov. Phil Murphy showed up on cable shows 36 times. Both Lamont and Murphy made a handful of appearances on Fox News as well.

But Pritzker also was also overshadowed, in terms of number of appearances, by Michigan Gov. Gretchen Whitmer, who is rumored to be a Democratic vice presidential contender, with 20 spots and Colorado Gov. Jared Polis, who was featured 25 times.

Pritzker’s six appearances put him one ahead of California Gov. Gavin Newsom, but behind the Democratic governors of Rhode Island, Delaware and Washington state.

Overall, though, the sudden elevation of governors – Democrat and Republican – in the national media is a remarkable development.

It comes at a time when many national health officials, including the U.S. surgeon general, the director of the Centers for Disease Control and Prevention and the commissioner of the Food and Drug Administration have all largely disappeared from national TV programs. That means viewers of some of the country’s most prominent public affairs shows will more likely hear from governors than federal health officials in the middle of a pandemic.

But it’s also a remarkable change in governors’ attitudes toward the shows. Scott Pattison, a former executive director of the National Governors Association, said the group often encouraged governors to appear on national TV to highlight the work that governors are doing. National shows wanted governors as guests, but governors didn’t see much benefit, Pattison said.

“Frankly, most governors only wanted to have press in their state,” he said. “The only ones who did it were running for president. So this is a big deal.”

David Turner, the communications director for the Democratic Governors Association, said another factor making governors more interested in appearing on national shows now might be that the hosts and reporters now want to talk about the issues that are most important to the governors.

“Going on cable TV might get [governors] attention inside the Beltway, but wouldn’t help them get things done in their state capitol,” he said. “Generally, it came from a place of pragmatism. There are only so many hours of the day, and the issues they wanted to talk about were likely not going to be covered. Now, they can be, because everybody is talking about the same issue.”

“MSNBC is not going to talk about the bonding package” that a governor wants, Turner said. “They’re focused on presidential primaries, President Trump and impeachment, not the day-to-day issues of state government.”

But if national shows are looking for compelling storylines and juicy quotes, Pritzker has delivered.

In early April, for example, White House adviser Jared Kushner, Trump’s son-in-law told reporters the “notion of the federal stockpile was, it’s supposed to be our stockpile; it’s not supposed to be state stockpiles that they then use.” The president doubled down on that argument, saying that the federal government is not “an ordering clerk for the states.”

Pritzker challenged Trump’s assertion within days on CNN. “The president does not understand the word federal,” he said.

“There’s no way that we can stockpile in anticipation of a pandemic that no one anticipated, and yet the federal government is responsible for doing precisely that,” he added.

U.S. Rep. Rodney Davis, a Republican from Taylorville, has been critical of Pritzker’s approach to the Trump administration but said he has no problems with the governor pleading his case on national TV. “If the governor feels that that’s effective, then I’m glad he’s utilizing that,” Davis said.

In fact, Davis credited the governor for listening to suggestions he made about the state’s pandemic response.

In one case, Davis and several other members of the Illinois congressional delegation asked the governor to change a rule that required all patients with MRSA to be kept in isolation rooms in health facilities, even if they did not have an active infection. Getting rid of the requirement would reduce hospitals’ use of personal protective equipment by 40 percent, they argued.

Davis’ other recommendation was to allow medical facilities to perform elective and diagnostic procedures earlier than Pritzker originally had planned to do. Davis said that move would help save the lives of people with medical conditions, like cancer or heart disease, that can be treated.

But the key to getting the governor to make those changes, Davis said, was going to the media.

“If it works for us to convince him that there are some commonsense measures that should be taken,” Davis said, “I wouldn’t begrudge him for doing the same thing.”