We’ve got the rap of being one of the most violent cities in the nation. Here’s a detailed look at why, and our best way out.

Chicago gun violence problem is widely recognized as one of the worst in the nation, evidenced by the six killed and 66 more injured in shootings over the recent Fourth of July weekend. As new Mayor Lori Lightfoot pledges to fix the seemingly intractable problem, we took a comprehensive look at the issue, looking at the biggest factors contributing to Chicago’s problems, which neighborhoods, from Rogers Park, to Humboldt Park, Garfield Park, Austin, Englewood and Chatham are seeing the biggest spikes - and occasional dips - in crime, and what successful strategies other large cities are implementing to turn the tide. Here’s a snapshot: 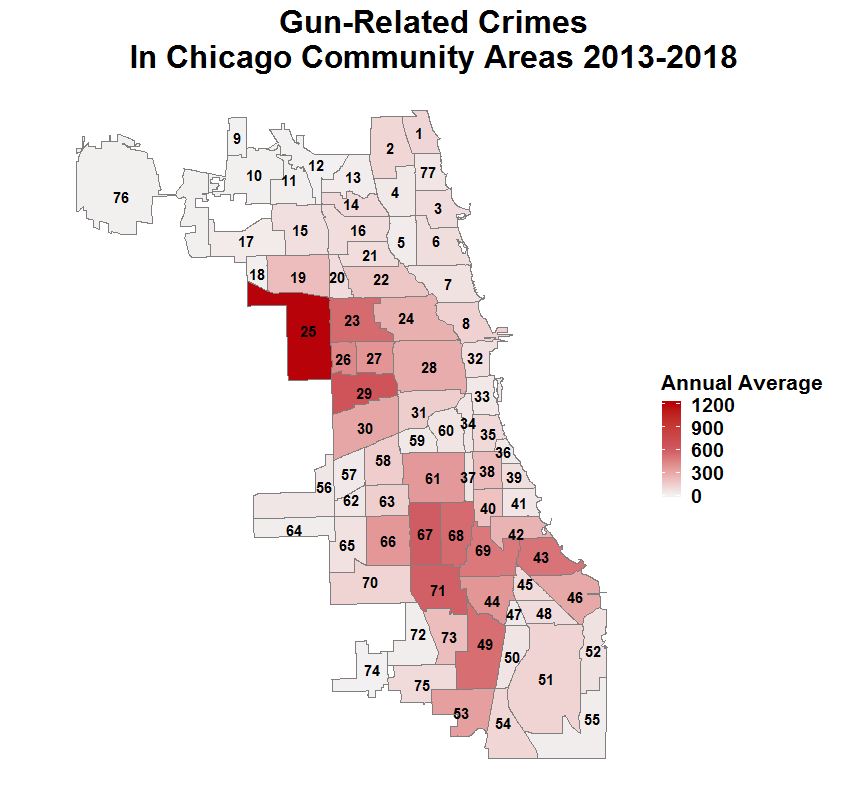 A key to Chicago community areas can be found here.

Across Chicago an analysis of the data shows homicide numbers fell from 2010 to 2015, and then again since 2017. There were 770 homicides in 2016 marking a nearly 20-year high and putting Chicago in the national spotlight on the issue.

*2018 FBI numbers are considered unofficial at this point.

Factors helping those numbers include the recruitment of 1,100 new police officers, the entire department being trained on a revised policy regarding the use of force and the introduction of mandatory body cams to patrol details. A larger new effort by the cops was the inauguration of “Strategic Decision Support Centers” throughout Chicago’s most problematic areas and beyond. These support centers act as intelligence centers for the police in city districts, and are staffed by police officers and civilian data analysts (many of whom are from the University of Chicago) tasked with strengthening police operations in the area with information and professional counsel. Much of this is accomplished through technological means - including tailored software, surveillance cameras, equipment that can identify gunshot noises in a wide area, digital maps of districts and quick-response lines of communication - that together have by all accounts been quite successful in preventing or combating criminal activity in their target areas.

Initially, the districts were only created in police districts that were historically problematic, such as Englewood, and the Harrison district which covers Garfield Park. But their success has since warranted spreading the initiative to almost every other district. Although its effects have been positive, this new large intersection between technology and policing has left some worried.

Ed Yohnka, spokesman for the American Civil Liberties Union of Illinois, recently told the BBC that “we can't use data and technology in a way that supplants suspicion for real evidence that someone is involved in a crime. Community-police relations are already poor in this city, and if the technology simply becomes a stand-in for community policing, then that's a problem”.

It may be assumed, however, that it was partially due to this initiative that the homicide and violence numbers have kept decreasing in 2018, even if there is cause for reflection on its long-term consequences. ‍

‍The number of shooting incidents in the city further decreased from 2,750 to 2,355 in 2018, the largest drop offs being in the Austin and Ogden districts - which in 2017 totaled 491 combined shootings. There were 352 at the end of December last year. The aforementioned Harrison district was the most problematic for the entire year, which on its own had over 300 shootings the entire year and only marginally improved that statistic from 2017. Second came Calumet, with 193 shootings - an increase in violence from the previous year’s 160. Calumet police operations came under attention in 2018 after two officers assigned there took their own lives while in their station’s parking lot, another died of a heart attack, and two more were hit by a train while on an investigation.

As of July 19, there had been 281 homicides so far in 2019, 24 fewer at this point than last year, according to the Chicago Tribune’s report last week.

The Center for Illinois Politics crunched numbers of homicides as well as crimes aggravated by the use of a gun across the city over the last 5 years. Numbers of those gun related crimes rose from 10,556 in 2014 to 14,649 in 2018.

A look at the city’s 77 neighborhoods shows that predominantly African American neighborhoods on the city’s South and West sides are disproportionately affected by gun violence. But across the board with few exceptions, we found gun violence has risen in almost every neighborhood, despite its racial, ethnic or socioeconomic makeup.

Exceptions include the South Side communities of Avalon Park, which saw 92 gun related crimes in 2014, and 86 last year; Pullman, which decreased from 61 in 2014 to 54 in 2018 and Oakland, which saw a decrease from 36 in 2014 to 34 in 2018, and the North Side neighborhood of Rogers Park, which dipped from 118 to 103. President Barack Obama’s former South Side neighborhood of Kenwood also saw a decrease, from 78 to 58 during the four-year stretch.

Communities that have seen relatively flat levels of gun violence include the Northwest Side’s Dunning, Edgewater, McKinley Park, Mount Greenwood, Morgan Park and Beverly on the city’s Southwest side, and the South Side communities of Hyde Park, South Shore, Washington Heights and Washington Park.

New York City, which boasts the “lowest incidence of gun violence in any major U.S. city,” established its Office to Prevent Gun Violence in 2017 under Mayor Bill DeBlasio. Its efforts have included implementing a public health awareness approach to reducing gun violence it calls “Cure Violence” which “identifies and engages individuals most likely to be involved in gun violence and deploys interventions aimed at curbing that behavior before it occurs, including retaliatory shootings. The project employs “violence interrupters,” typically former gang members who have turned their lives around, to quell street disputes—intervening before escalation to gun violence—and links potential shooters to supportive services.

The office, along with the NYPD, also have instituted a “post takedown engagement strategy” in the days following “takedowns” or major law enforcement actions that aim to stabilize violence-plagued neighborhoods and deter youth from re-establishing gang networks. The city has also created a shooting incident location map, updated with real time information from the police, which is shared with service providers so they can coordinate community-based responses to gun violence. Researchers from Rutgers University are also in the midst of conducting a study on how to disrupt illegal firearms transactions.

In Los Angeles, where violent crime has declined for decades, this year’s shooting of rapper Nipsey Hussle was a reminder that it’s still a prevalent problem in many neighborhoods.

Garcetti recently told the New York Times that this “becomes a network...that we can mobilize when there’s important legislation, nationally or at the state level. This is what you can do in your neighborhood.”

Lightfoot has outlined what she calls a “proactive approach” to her“biggest challenge as mayor.” That includes, she told CBS News, bringing “resources to the communities so that they can grow; that we bring economic development opportunities to neighborhoods; that we work on providing wraparound services and job training in the neighborhoods so that people in those neighborhoods who don’t have a history of work actually have a pipeline to good paying jobs,” she said.

The Mayor said she will create a new Office of Public Safety to help fight crime in neighborhoods hit hardest by gun violence, in part by building better relationships between the Police Department and the community. Last month, she also unveiled a $1.4 million summer mentoring program for at-risk teens.

“You have to bring people together. They have to get comfortable with each other, which is why we are encouraging our officers to get out of their cars, walk the beat, get to know the community that they’re in. We will be bringing some additional changes both in training our new recruits and our veteran officers,” she said.

The University of Chicago’s Crime Lab has estimated that gunshots cost the city an estimated $2.5 billion a year.

The strategy of “focused deterrence” — focusing on those at greatest risk of violence, making them aware of the ramifications of law enforcement and offering community-based help with education, jobs and healthcare to build foundations for a different life — have been proven to help situations in Boston and Oakland, California.