Illinois landed a balanced budget this year. But hold the phone. There’s more to it.

Illinois has a budget this year. It’s on time. And it’s balanced. Hurrah. But that’s not the whole story. This year’s $40 billion spending plan is also a cautionary tale, once put in perspective. 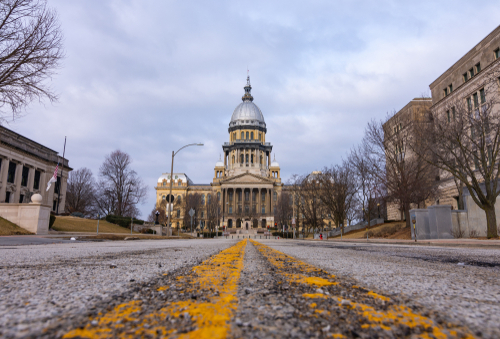 Just as troubled communities must take time and disciplined effort to heal after traumatic events, Illinois is recovering in myriad ways after a tumultuous decade of bad financial decisions.

They include: A now imprisoned governor who treated the state’s pension system like a piggy bank. His successor’s juvenile attempt to raise public awareness about the state’s chronic pension problem with the creation of a cartoon snake named “Squeezy the Pension Python.” Yet another governor who presided over a historic, two-year budget impasse. A bill backlog that reached, at one point, a staggering $16 billion, a shredded social safety net, decimating services from home healthcare to domestic violence help to foster care.

New Democratic Gov. J.B. Pritzker’s office has proclaimed happy days are here again, with a budget plan that restores funding to agencies providing key services to segments of the population the state strives to protect and enrich: Elementary and Secondary Education, Higher Education, the Department of Children and Family Services, and state retirees.

Illinois is balancing its books again, but it doesn’t mean it’s budgeting well.

“The labor pool is in tatters. You have a much smaller staff working in the department of revenue, the human service network,” said David Merriman, James Stukel Presidential Professor of Public Administration at the University of Illinois Chicago.

Following the legislature’s passage of a Fiscal Year 2020 $40 billion budget plan, we’ve taken a birds eye view, looking at funding over time, where the bar was set for various agencies’ budgets a decade ago, and where, after years of crisis and fluctuations in state and federal revenue, funding is today, along with key problems at hand.

Despite budgetary challenges, K-12, or elementary and secondary education, has seen a gradual, steady increase in spending from $10.7 billion in FY2010, to $15.5 billion in 2019. Aside from fiscal year 2011, when funding decreased to $9.6 billion due to the Great Recession, K-12 education funding has increased every year - by nearly $2 billion the next year, to $11.3 billion, and by nearly $1 billion between 2013-14, from $11.5 to $12.5 billion and $1.5 billion from 2017-19, from $13.8 billion to $15.5 billion. But critics on both sides of the aisle argued the state’s funding formula was broken. A new funding formula was approved in 2017, rejiggering the way state dollars are allocated to public school students. As part of that funding overhaul, more overall money was pledged to students on a yearly basis . This year is no exception, with an extra $375 million dedicated to K-12 schools, and $50 million to early childhood education.

Higher education spending from state and federal sources shows a gradual uptick at first glance - beginning at $2.7 billion in fiscal year 2010 and resting at $3.86 billion in the 2019 fiscal year ending June 30th. But a spike in administrative costs and pension payments to university retirees has prevented those funds from being spent in the classroom, causing tuition and fees to increase at universities throughout the state, many of which have been plagued with resulting enrollment declines. Capitol Fax’s Rich Miller noted late last week that approximately 50 percent of high school graduates in Illinois chose out of state colleges in 2017, up from 23 percent in 2002 . The state’s two-year budget impasse also forced the university system to operate without a budget during the 2017 fiscal year. 2019 funding levels also- are on par with funding levels two years earlier, in 2017.

In the upcoming year’s budget, an additional $150 million in state funding is allocated to higher education. In recent years, Merriman says, some universities, including the University of Illinois and University of Illinois at Chicago, have adapted to “become much more focused on doing things that generate revenue. ...you have to think of it as a business.”

“We’ve changed our model. That means less emphasis on research, more time and money spent on undergraduate programs that appeal to the diverse student base that is growing in the Chicago metropolitan area.”

Department of Children and Family Services

The Department of Children and Family Services - an agency rife with scandals and an ever changing administration - has seen a steady decline in funding since 2010, with spending levels of $1.18 billion in 2019 a touch below their 2010 levels of $1.23 billion.

Agency funding from state and federal sources dipped to a low of $1.07 billion in 2017. In 2019, funding rose slightly, back to 2012 levels. In 2020 state funding is set to increase by $80 million, allowing the agency to add 300 more positions, which includes caseworkers, and the development of a “comprehensive child welfare information system.”

After funding stayed largely flat over the past decade, the budget at the Department of Human Services - the agency that provides food stamps, medical and child care assistance - has increased from $5.3 billion in 2010 to $6.4 billion in 2019. But a closer look at funding shows a flat line of about $5.5 billion in state and federal funding in all years but 2016, when the temporary income tax increase expired and revenues plummeted.

But the department got a boost last year by about $1 billion, and is expected to receive $6.8 billion in state and federal funds in the upcoming fiscal year. That boost includes an additional $107 million to provide for increased pay for community-based service providers serving those with developmental disabilities, child care, and home health care. It also includes $29 million to help facilitate statewide participation in the upcoming U.S. Census.

Thanks to a boost in revenue this spring coming from an unexpectedly positive stock market performance, better federal reimbursement for Medicaid, and changes in federal tax law, Pritzker’s office declared that this year, it would be “able to meet the current funding commitment to the (public employees’) retirement systems without extending the (pension) ramp. That said, pensions annually account for nearly 25 percent of the state’s general fund budget - totaling 7.5 billion last year, so there’s no easy fix.

“Ensuring the state’s pensions are sustainably funded continues to require significant effort, and will not happen overnight,” Pritzker said in a statement, promising that in  the coming months his administration would work on “a responsible approach to the state’s unfunded pension liabilities, which continue to threaten to crowd out vital investments in education and public safety. The state has budgeted $8.1 billion toward pension contributions in the 2020 budget.

Merriman calls pension, Medicaid spending and education “basically the whole ball of wax” comprising the bulk of the state budget. Moving forward, he said, “All you can do is try and keep spending relatively modest not overpraise and kind of hang in there for awhile, as you begin to generate additional revenue and a sustainable revenue model.

He calls a Democrat-backed plan to move from a flat, to a graduated or progressive income tax, which taxes higher earners at higher rates “a sustainable revenue model.”

Opponents of a change to a progressive, or graduated income tax system from the state’s current flat tax say a move to tax higher earners more would only embolden lawmakers in Springfield to spend recklessly. Pritzker didn't offer any hard guarantees, but he has described himself as "committed to stabilizing the state’s budget, making sure that we got rid of deficits that exist, and creating this, frankly, very strong foundation for people to build on in our state."

In the proposal released by his office outlining the progressive tax plan, the main fiscal issues presently being faced by Illinois are listed with an implication that the new tax system would help combat all of them. They are: a $3.2 billion dollar structural deficit, $15 billion dollars in debt associated with unpaid state bills, late interest payments on unpaid bills that exceed $1.25 billion from the state’s long-standing budget impasse, “hollowed out” social services and facilities; and “tens of millions in spending for court orders and consent decrees.”

“I think you basically need to generate additional revenue, which he's working on, but you also can't spend much. You have to pick priorities,” Merriman said.