Pritzker Interview: How Coronavirus Thrust the Governor Onto National Stage

As his state scrambles for resources to cope with the COVID-19 pandemic, Gov. JB Pritzker has had to raise his profile with federal officials and national media to get help for Illinois. (Part 1 of a series of 3) 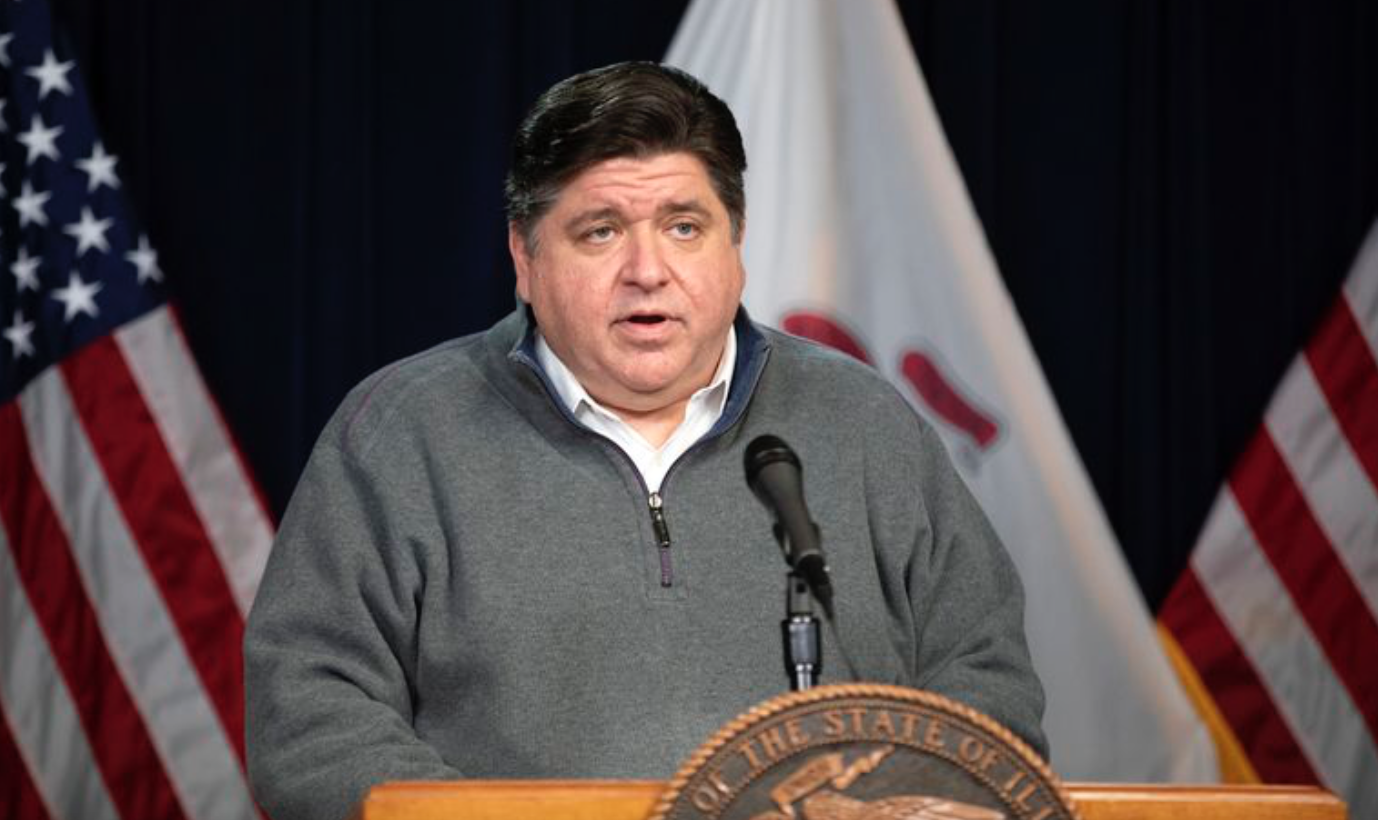 Illinois Gov. JB Pritzker, who has long been active in Democratic Party circles, routinely criticized President Donald Trump during Pritzker’s 2018 campaign for governor. But that didn’t prevent Pritzker from joining a dozen other governors-elect in meeting with Trump and Vice President Mike Pence at the White House a few weeks after the election.

“It’s important for me to work with Democrats and Republicans here in Washington on behalf of the people of Illinois,” Pritzker told Lynn Sweet, the Chicago Sun-Times Washington correspondent, at the time. “So you know I was glad to come here to express the needs and desires of our people and make sure that the president and vice president know that, you know, Illinois is an important place for them to pay attention to and help.”

At the time, Pritzker was worried about getting an infrastructure package through Congress and getting help from the Army Corps of Engineers to prevent Asian carp from entering the Great Lakes.

Pritzker has returned to the White House with other governors at least twice since he was sworn in, even as the Illinois governor criticized the president and his administration on a wide range of policy topics.

But the relationship never exploded into view, for Illinoisans or the rest of the country, until the coronavirus pandemic started its devastating march through the United States.

“I don’t take random opportunities to be critical,” Pritzker told me. “The moments when I have been critical have been when I am made promises by the White House and they don’t deliver. And that has happened time and time again.”

(Pritzker said he has talked with the president and vice president, but most of the specific promises he received were from the president’s staff or made during press conferences or administration calls with governors.)

The Illinois governor mentioned the delays the Centers for Disease Control and Prevention had in distributing tests in the early days of the pandemic. (It turned out many of the tests the CDC produced were contaminated.) White House officials promised Pritzker the federal government would deliver 300,000 N95 respirators, which filter out 95 percent of airborne particles. In fact, they promised them quickly, or in White House parlance, “in Trump time.” Instead, Illinois got 300,000 surgical masks, which the CDC warns, are “not considered respiratory protection.”

For the month of May, Pritzker said, White House officials promised 155,000 testing swabs a week. The state got 39,000, plus another 29,000 that appeared to be generic Q-Tips. It turned out the smaller swabs had simply been mislabeled, but even counting them, Illinois got less than half of what the federal government promised.

“We can’t rely upon them. When they make us a promise, I can’t just assume that’s going to be fulfilled,” the governor said. “If I had relied upon the delivery of 155,000 swabs this week, we wouldn’t be doing testing.”

“We did 29,000 tests yesterday because of us. That wasn’t anything to do with the White House. [It was] because of our team. It was our efforts to get swabs on our own,” Pritzker continued. “So when I say we’re ‘going it alone,’ what I really mean is we’ve had to make the assumption that we’re in this on our own.”

The governor also stressed he has praised the federal response when the agencies delivered, such as when they sent 300 ventilators to Illinois. “Look, I’m not somebody who's just gratuitously taking shots,” he said.

But Pritzker’s approach does stand in contrast to that of some of his other Democratic colleagues.

“What’s different about Pritzker is that, of all the governors, he’s been the most critical of Trump,” said J. Miles Coleman, an associate editor at Sabato’s Crystal Ball, a political forecasting project at the University of Virginia’s Center for Politics. “[New York Gov. Andrew Cuomo] has criticized Trump occasionally, but Pritzker takes it to an extreme.”

In fact, Cuomo tried taking a conciliatory approach toward Trump in the initial stages of the outbreak. The Washington Post noted that Cuomo’s approach stood in stark contrast to that of Pritzker and Michigan Gov. Gretchen Whitmer.

“[Cuomo], known by longtime observers as someone who is obsessively controlling and who often clashes with enemies and friends alike, has long lived by a slogan described by a former chief of staff: ‘We get along at two speeds here: Get along and kill.’ For now, he is trying to get along. And it seems to be working,” the Post reported in March. The president, the newspaper noted, said his relationship with Cuomo “has really been amazing.”

The détente didn’t last long. Within days of the Post story, the two New Yorkers were fighting over the number of ventilators the federal government sent to the hard-hit city. “You want a pat on the back for sending 400 ventilators? What are we going to do with 400 ventilators when we need 30,000?” Cuomo asked of Trump.

That didn’t stop the Trump campaign, though, from including positive comments from Cuomo and the Democratic governors of California, New Jersey and New Mexico in its ads.

Other Democratic governors have tried appealing to Trump, as well. After Colorado Gov. Jared Polis met with Trump at the White House, he explained his rationale for coming to Washington. “Look, if we get one additional test or mask or glove for Colorado, of course it’s worth it,” he said.

One tactic that some governors, like Ohio Gov. Mike DeWine, a Republican, have taken is to criticize the decisions of federal agencies while praising Trump. DeWine, for example, pressed the Food and Drug Administration to approve a procedure for decontaminating masks by appealing directly to the president.

But Pritzker has seemingly taken the opposite approach: He will praise federal agencies while blaming the White House.

Even before taking office, Pritzker said he made it a point to get to know the people he would interact with at federal agencies. “You need to interact with the agencies, not the politicians, but rather the people who are actually getting things done,” he said.

He’s been especially complimentary of the U.S. Army Corps of Engineers for converting McCormick Place in Chicago into a temporary health care facility and adding hospital capacity downstate.

Pritzker also praised Pence, a former Indiana governor, for being “understanding” of the problems facing states. “I don’t hold him responsible for the failures of the White House,” Pritzker said of Pence. “I think he genuinely would like to address those challenges. I think the problem is, there’s been a lot of over-promising and under-delivering by the White House, and I think that’s been their problem all along.”

Trump, of course, relishes a good fight, and he’s often used governors as foils through the coronavirus crisis. “I want them to be appreciative,” Trump said of the country’s governors in late March. He added that, unlike Pence, who heads Trump’s coronavirus response task force, he wouldn’t call back governors who weren’t appreciative of the federal government’s work.

The president called Jay Inslee of Washington state a “snake” and often brings up his failed presidential campaign. On multiple occasions, Trump either forgot or intentionally refused to use Whitmer’s name, instead calling her “that woman from Michigan.” (Whitmer is rumored to be under consideration for the vice presidential slot in this year’s presidential election.) Trump even said he “strongly” disagreed with Brian Kemp, the Georgia governor, for making his state one of the first to reverse business closures. “I wasn’t happy with Brian Kemp. I will tell you that right now,” Trump said of his fellow Republican.

Trump has called Illinois a “poorly run state” and singled out Pritzker by name. “There is a governor, I hear him complaining all the time, Pritzker. He is always complaining,” Trump said in early April.

Pritzker invited the spotlight in early March, when he called out Trump on Twitter for the federal government’s bungled rollout of a hurried travel ban from Europe. A lack of federal screeners created massive crowds and chaos at O’Hare International Airport and other airports around the country. “The federal government needs to get its s@#t together. NOW,” Pritzker tweeted at 10:50 p.m. on a Friday night. A White House official quickly called Pritzker and “yelled at me,” the governor recalled.

“The partisans on both sides have already picked which corner they’re going to be in. So what is the message to those who don’t live, eat and breathe politics every day? Those are the ones that I think the governor has to focus on and listen to,” Davis said. “They’re the ones that don't like [Pritzker’s] tweets of, ‘Get your blank blank together.’ It seems immature.”

The congressman noted that Pritzker bristled when reporters asked about his wife traveling to Florida during the crisis.

“Frankly,” Davis said, “if you’re going to Monday morning quarterback a federal response to a disease we didn’t know existed seven months ago, then you open yourself up to criticism when your family decides to leave the state when you’re telling people to stay home. You can’t be offended by people criticizing your response if you’re so quick to criticize others during the pandemic.”

One way or the other, Pritzker shows no signs of stopping either his criticism of the federal response or his requests for more federal help.

Early this month, for example, the governor told Margaret Brennan of CBS’s “Face the Nation” that the testing supplies the federal government was sending Illinois was “not enough.” He called on Congress to help states balance their budgets, given the huge drops in revenue they saw because of the outbreak, and to do it with as few restrictions as possible. “The federal government,” Pritzker said, “is really the only entity that can step in and help us out.”