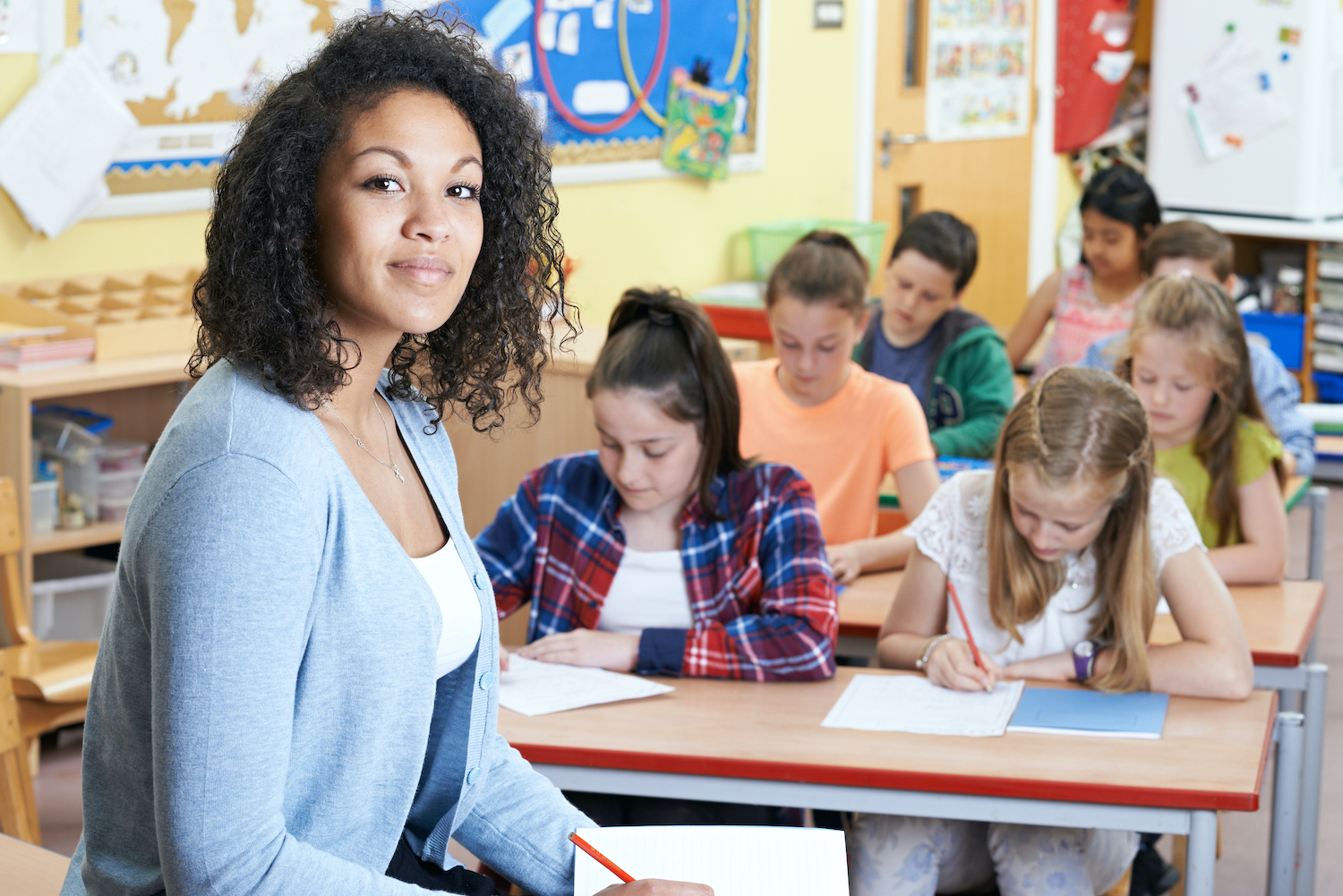 It’s back to school season, and along with news of school shopping sticker-shock, there is a foreboding refrain of “teacher shortages,” peppering the airwaves and prompting many to wonder about what the situation is in their neighborhood classrooms. Since providing an education is primarily a state and local responsibility, staffing levels vary widely from state to state. While in some places across the country school districts are facing double-digit shortages of teachers, in other states like Illinois, navigating the recent, post-COVID public school landscape has been more manageable, though staffing challenges remain.

‍One of the main factors contributing to the increase in classroom teacher vacancies is the significant investment and barriers to becoming a certified classroom teacher. It’s expensive to obtain a college degree and the process to ascertain employment credentials or renew licensure can be time consuming and costly.

Additionally, there are increasing (and with COVID, unexpected) challenges within the education profession, like new protocols and the reduction in support staff  – all causing problems with retaining teachers who have already been hired. Though these two trends have been building, they seem to have reached critical mass with the arrival of COVID. One recent indicator of the growing issue came from a survey of the National Education Association (NEA) that was released in February 2022 showing, “A staggering 55 percent of educators are thinking about leaving the profession earlier than they had planned.” This represents a significant increase from 37 percent in August of 2021.

‍So, the combination of burned-out teachers and the disillusionment of young people with regard to entering the profession has set off alarm bells in schools around the country, at the same time as the impacts set in.

‍In response, some states are making big moves to both attract teachers and to retain those already hired. For example, this past June, the Florida state legislature passed a law to allow military veterans to teach, without a teaching degree. These veterans must have a minimum of 48 months of military service completed and an honorable or medical discharge, and they will be assigned a teaching mentor if hired.

Similarly, Arizona’s Gov. Doug Ducey recently signed legislation that allows those who are enrolled in college (as opposed to having earned their degree) to become teachers while they work on their bachelor’s degree. And, with an eye to retain current teachers and attract new ones, a Texas school district has moved to a four-day school week, starting this school year.Illinois hasn’t seriously considered some of the more extreme moves other states have implemented, and while its schools are facing staffing challenges, they are less severe than other states. But there are staffing issues and Illinois is tapping creative solutions that aim to solve them while addressing other issues like diversity and equity.

‍What is happening in Illinois’ largest school district is similar to what many districts around the state are facing. “We anticipate having more licensed educators than last year at this time – and more teachers than at any point in this past decade,” said Mary Fergus, Media Relations Executive Director for Chicago Public Schools (CPS). “We’ve added more than 500 new teacher positions for this school year and 1,000 school-based positions overall.”

But even with these gains, Fergus estimates CPS will see a slight uptick, possibly to 4 or 5 percent, in CPS’ vacancy rate over last year’s 3.5 percent figure. How can it be that there are more licensed teachers this year but still a slight increase in vacancy rates? Fergus explains, “Because we created more positions and our final year-over-year attrition rates are expected to be higher.”

‍And CPS is not alone in experiencing lower enrollment and increased staffing. According to the Illinois State Board of Education, in 2018, the number of students enrolled in Illinois was 2,001,448 and they were instructed by 127,238 teachers. By 2021, enrolled students decreased to 1,887,316 while the number of teachers increased to 132,238. Schools are adding positions to address learning loss from COVID, improve social and emotional learning (SEL), and to replace retiring teachers. Yet even with these hires, there are some teaching jobs that are very hard to fill. So clearly, the issue with teacher vacancies is more than just a numbers game.

‍While districts across the state report slight and sporadic shortages, there is little dispute that there continues to be a shortage of special & bilingual education, along with world languages, agriculture, and some secondary sciences teachers. And, according to Liam Chan Hodges, Media Coordinator for Illinois State Board of Education (ISBE), “These current shortages have a disproportionate impact on chronically struggling schools, underfunded schools, and schools serving low-income communities.” The shortages hit hardest where the need is often the greatest – and simply doing more of what we’ve done in the past will not solve the issue.

ISBE strongly encourages schools to invest in their local teacher pipeline by applying for the grants and programs mentioned above, especially Education Career Pathways Grants and Educators Rising groups to encourage current high school students to come back and teach at the district.

“Every school district should have programs to recruit current students into teaching,” said ISBE’s Chen. “We also encourage districts to use their federal pandemic relief funds or their state Evidence-Based Funding to create scholarship programs to pay for current district staff and students to get licensed and commit to teaching at the district.”

‍Community Colleges and Universities are also working on programs to address the challenges. For example, Illinois State University (ISU), which partners with over 225 districts for student teaching placements in over 500 schools, is working to ensure that a stream of qualified, degreed teachers continue to move into the profession in places that need them.

“To provide greater geographic access to students, we have a partnership with CPS and City Colleges of Chicago, which will enable students to complete a program in early childhood, elementary, or special education without moving from the city,” explains Kelli Appel, Director of Enrollment and Transition at ISU’s College of Education.

These kinds of initiatives are more comprehensive and effective because they include specific teaching areas where there are widespread shortages and use outreach to fill them with local candidates, who may be more interested and invested in staying in that community once their degree is complete to teach full-time.

Not only is the ISU partnership program and others like it addressing potential shortages, but they are chipping away at other, long-standing staffing challenges at the same time.

‍More Than a Hiring Issue

‍Paul Bruno, Asst. Professor of Education Policy, Organization, & Leadership at University of Illinois in Champaign, agrees. “We need targeted solutions,” stressed Bruno, who is also an author and has written about the subject in this article from Education Next.

“In some downstate areas, it can be very hard to recruit and retain teachers. We need to ask better questions and adhere to what the evidence tells us in answer to them.” Part of the problem with inequity in Illinois education is because property taxes serve as a source of funding and more affluent communities generally have more funding than working class communities.

‍In this landscape, Bruno explains that simply increasing the number of graduates with education degrees is too broad a solution to address the very specific needs of a downstate district struggling to recruit, say, a Special Education teacher. Perhaps the example of the Texas district that moved to a four-day school week in a rural setting could be helpful.

‍Similarly, districts can implement staffing solutions with an eye to achieving greater diversity in teaching ranks, which studies indicate improves learning. Achieving diversity in staff is a positive step forward that benefits students of all races, argues this Chicago Sun Times editorial, which details CPS’ strides toward that goal.

To that end, Chicago Public Schools’ Mary Fergus announced, “The district is on pace for approximately half of new CPS teachers to be Black or Latinx, up from one-third in 2017.” CPS continues to hire and onboard more teachers and staff to meet their goals with its “Teach Chicago” program, which launched four years ago to provide extra support to those looking to teach at CPS.

‍For its part, the Illinois legislature has also been working to address challenges to getting and keeping teachers in the classroom, and this past spring, Gov. JB Pritzker signed four of them into law.

‍HB 4646, sponsored by Rep. Sue Scherer, D-Decatur, lowers the fee for reinstating a lapsed teaching license from $500 to $50. Another bill, SB 3907, sponsored by Sen. Doris Turner, D-Springfield, increases the number of days in a row that a short-term substitute can teach from five to 15, while HB 4798, sponsored by Anne Stava-Murray D-Naperville, allows for substitutes to have 90 credit hours of college, or roughly two years of a four-year degree. And, addressing the shortage of aides in classrooms, SB 3988, lowers the minimum age for paraprofessionals from 19 to 18 years old.

‍These all aim to strike a balance between reducing barriers for candidates to enter education, while still maintaining learning standards.

‍Depending on where you are across the state and what classroom you are standing in, you will find there are many different reasons for teacher vacancies – and, the best solutions will address those specifics. Implementing a broad approach – no matter how novel or how tested – is not likely to provide an effective or lasting solution, or one that upholds high educational standards.