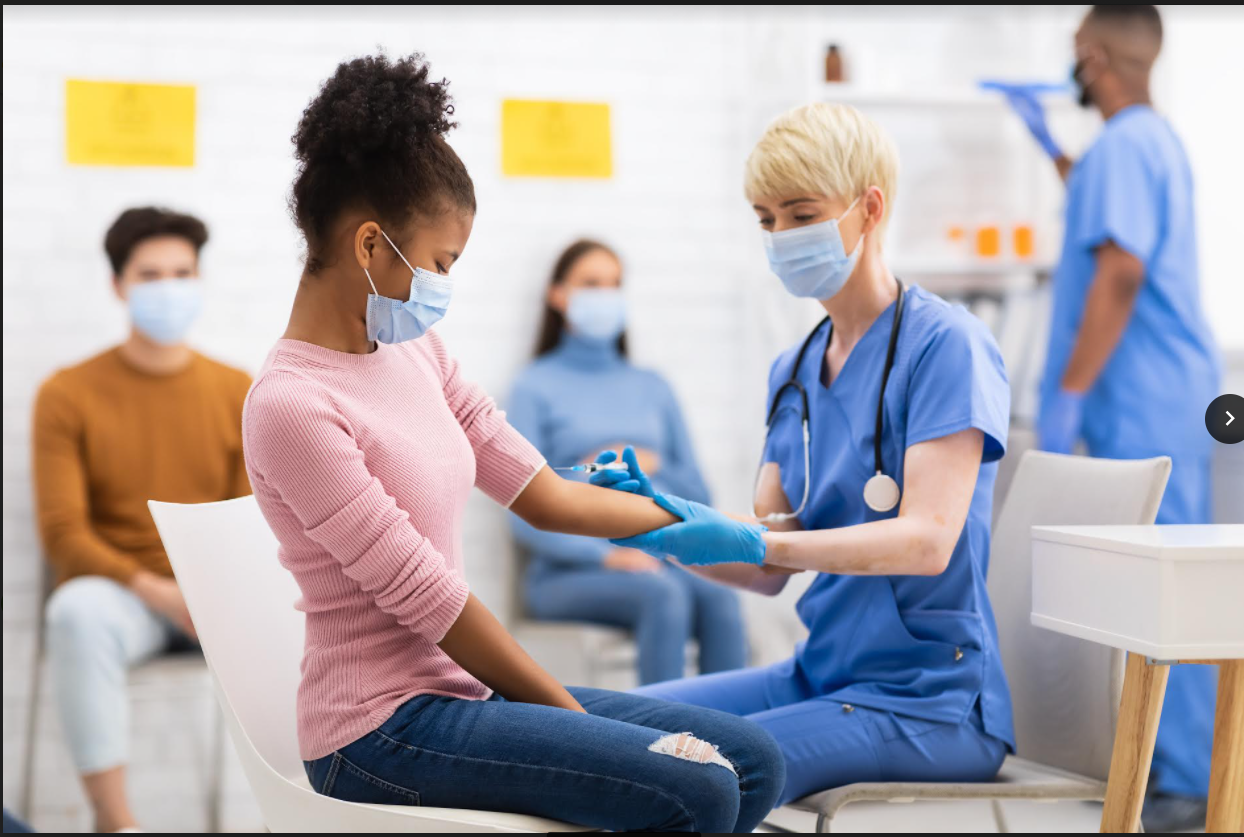 Nearly half of the Illinois children who are eligible to receive a COVID-19 vaccine (meaning those 12 years and older) have already received at least one dose, according to new state data.

Meanwhile, more than a third – 37.6 percent – were fully vaccinated as of Wednesday, the Illinois Department of Public Health reported.

The numbers for kids ages 12 to 17 were encouraging, said Dr. Anita Chandra-Puri, a Chicago pediatrician and a spokesperson for the American Academy of Pediatrics. “That’s fantastic news if that’s the case. I would love that,” she said in an interview.

“Everybody who’s eligible should get vaccinated. We know this is the same vaccine that has been given to almost 10 million children safely,” she said.

While comparable data wasn’t immediately available for other states, Illinois ranks high nationally in terms of percentage of all children who have been vaccinated.

Nearly a fifth (19.3 percent) of all Illinois children have received at least one dose of the vaccine. At that rate, Illinois is in a three-way tie for ninth place among states, according to data published by the Mayo Clinic. Vermont, which had the highest share of kids with at least one dose, had a rate of 25 percent.

Illinois fares a little worse among states when it comes to the percentage of all kids (newborn to age 18) with full vaccinations. Again, Vermont led the pack, with a rate of 21.4 percent. Illinois trailed behind with a rate of 12.4 percent, putting it in a tie for 15th overall.

The numbers have taken on a growing importance, with the start of the school year just weeks away and a new wave of Delta-variant COVID-19 spreading rapidly through the country and the state.

Last week, Illinois Gov. JB Pritzker issued a mask mandate for all public and private K-12 schools and daycares in the state. The governor said he was following guidance from the U.S. Centers for Disease Control and Prevention issued in late July. The federal agency recommended that all teachers, staff and students wear masks indoors at K-12 schools, after seeing “worrisome” data about the spread of the Delta variant.

Pritzker said he stepped in because it was clear that many school districts would not issue their own masking directives.

“Far too few school districts have chosen to follow the federal Centers for Disease Control's prescriptions for keeping students and staff safe,” Pritzker said. “Given the CDC’s strong recommendation, I had hoped that a statewide school mask requirement wouldn’t be necessary, but it is.”

Chandra-Puri, the Chicago pediatrician, stressed the importance of getting children vaccinated even though schools will now be requiring masks.

“Until we get this thing under control, these are just added layers of protection. Why would anybody not want to be protected?” she said.

Chandra-Puri likens the situation to safety measures in a car. “You have a car with brakes that work. You have an airbag that works. And you still wear your seatbelt, right?”

Public officials around the country are turning their attention to the task of vaccinating eligible students.

The White House declared the week of August 7 to be the “Back to School Week of Action.” The effort involves students, teachers, local officials, celebrities and social media influencers to encourage kids to get their shots. Ninety youth groups, religious organizations and schools are involved with the official effort to promote 200 vaccine events.

The Biden administration is also encouraging school districts to host at least one vaccine clinic before school starts. The National Parent Teacher Association (PTA) is working with pediatricians to enlist the doctors to provide vaccines at back-to-school nights. And several physician groups – including the American Academy of Pediatrics – are encouraging their members to ask kids and families about their vaccine status as part of the routine sports physical.

At the same time, the city government in Washington, D.C. is going a step further. It announced in late July that students who get vaccinated will be eligible to win an iPad or a $25,000 college scholarship. All youth who got their first shot received a $51 Visa gift card, and 400 of them got the chance to upgrade to a pair of Apple AirPods instead.

The incentives are part of a strategy to boost take-up rates for students, particularly students of color. Forty percent of white children ages 12-15 in the District have been fully vaccinated, compared with 10.5 percent of Black children in the same age bracket (the Illinois Department of Health has not provided similarly detailed data).

Meanwhile, the mayor of Jersey City in New Jersey is partnering with a local radio station to boost vaccine rates among students. Each of the city’s nine high schools will compete to get the highest vaccination rate; the top two finishers will win tickets to a hip hop concert for the entire vaccinated student body.

Of course, there are three times as many kids under the age of 12 than there are between the ages of 12-15. The federal government is not expected to approve COVID-19 vaccines for younger children until late fall or winter.

When the younger children become eligible, Chandra-Puri predicts they and their parents won’t be rushing to mass vaccine sites the way adults did when the vaccines first became available.

“I think schools and private pediatricians’ offices are going to be the number one place to do this,” she said, “because that’s where people traditionally think of getting the vaccines for their children.”

But Chandra-Puri admits she’s a little surprised people need extra rewards to get a vaccine.

“It’s sad to me that we have to do something to coerce people to do something that is actually really good for their health,” she said. “But if it takes a financial incentive for some people, perhaps that’s what needs to happen.”