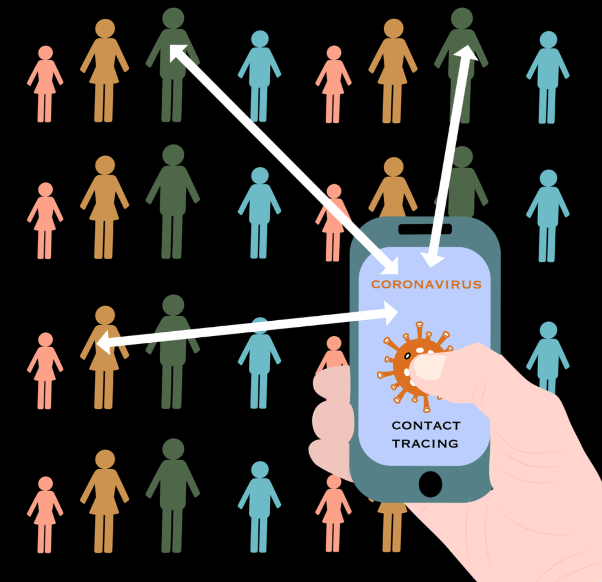 Much media attention in the United States has focused on increasing testing capacity, the first critical step to combating widespread infections like COVID-19. Most Americans are also familiar with the need to expand  the medical system’s capacity – increasing the availability of hospital beds, producing more protective equipment and ventilators, and (of course) enforcing social distancing. However, in most countries that have successfully minimized cases, another practice completes the puzzle of pandemic mitigation: contact tracing.

The definition is in the name: public health officials work with recently diagnosed patients to determine with whom they had contact, and by testing those people to determine who they may have infected.If done correctly, tracing provides officials with a map of who may be infected with a disease. From here, they can reach out to these individuals, isolate them, and test them. This intervention should significantly slow the rate of infection within a community.

Technology also plays an important role in contact tracing. Public health officials need data management software to keep track of the web of potentially contagious individuals. Much of the outreach to these individuals also takes place electronically. Big Tech companies like Apple and Google are working with governments to develop a program using devices to track the people who have come into contact with those infected, but with mixed results.

Where is this taking off?

Countries like South Korea and Germany have “flattened the curve” of COVID-19 cases more quickly thanks to contact tracing. Both nations hired thousands of public health workers specifically to perform contact tracing on a mass scale; Germany, for instance set and reached a goal of five tracers for every 20,000 citizens.

In the U.S., contact tracing is only now becoming a core component of states’ plans to fight COVID-19, and many of these states aren’t quite there in terms of having an adequate workforce. There are two benchmarks to meet in the U.S., set by the National Association of County & City Health Officials: 30 contact tracing workers for every 100,000 citizens, per state, or 100,000 workers nationally. The lack of a coordinated federal plan for contact tracing has prompted criticism from many outlets and healthcare professionals.

With the exception of North Dakota, no state has yet reached the benchmark of 30 contact tracers per 100,000 citizens. Most states aren’t expected to meet this goal, including many of those hit hardest by the virus.

Illinois is (likely) on track to meet its need.

According to the Restore Illinois plan, increasing contact tracing capacity is now a top priority in the state. Governor Pritzker stated it will likely take several weeks for Illinois to reach that capacity, some 3,800 contact tracers by the Center’s estimate. At a press briefing this month, Pritzker shared his administration’s estimate of the cost at $80 million.

When reached for comment, the Illinois Department of Public Health stated it did not have a specific projection for the number of contact tracers currently employed in the state at this time.