Putting a progressive income tax in perspective: The devil's in the details

Has Springfield's debate over a progressive income tax left you confused about how - and when - such a change might impact you, your friends and neighbors? You're not alone. 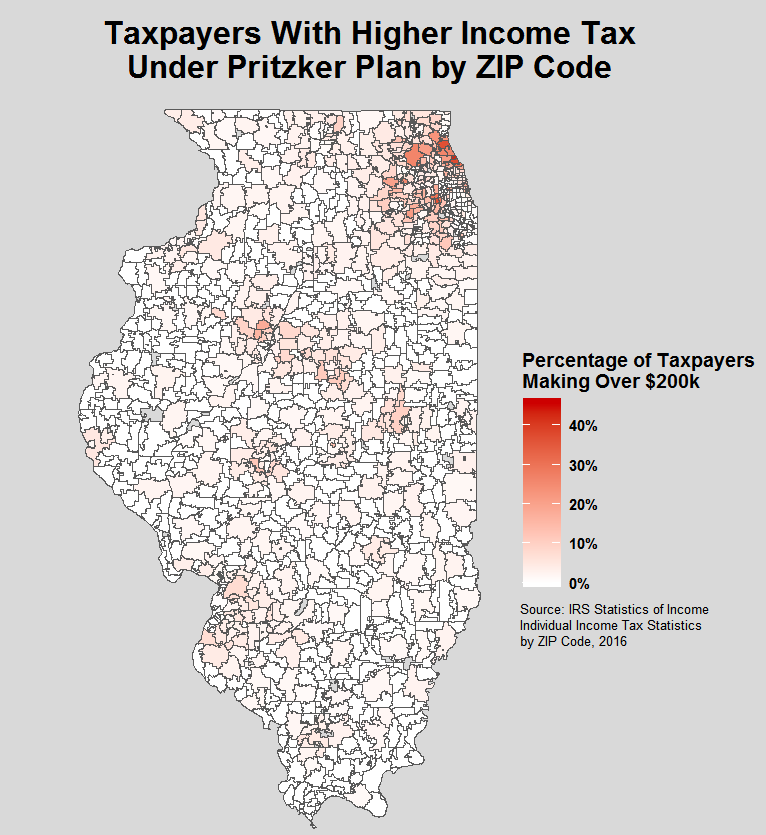 Zip codes across Illinois with more residents earning more than $200,000 annually would be affected more heavily by a shift to a progressive tax.
Center for Illinois Politics
Read the full report »

We break it down, as proposal backed by Gov. J.B. Pritzker to tax those earning higher incomes advances in the final days of the legislative session.

Illinois has barred lawmakers from taxing millionaires at a higher rate than other taxpayers for the past 50 years. But a measure to change the state constitution and allow the state to tax higher levels of income at higher rates cleared the House Monday afternoon, after passing the Senate weeks earlier. To then amend the state constitution, 60 percent of voters must vote in favor of the constitutional amendment.  Legislation detailing a new progressive tax rate structure awaits a vote by the full House.

According to the legislation sponsored by state Sen. Toi Hutchinson of Olympia Fields, those earning $10,000 annually would be taxed at 4.75 percent. Everyone in Illinois is being taxed at 4.95 percent right now.

Starting at income levels of $250,001 or more a year, the rates start to differentiate for individuals versus couples filing joint tax returns.

How it plays out across the state

The Internal Revenue Service breaks down income brackets by zip code, giving us an estimate of which communities are hit the hardest. Chicago's wealthy North Shore has the highest percentage of residents bringing in over $200,000 annually. Kenilworth tops the list at 46 percent, followed by Glencoe at 43 percent, Winnetka at 38 percent, and Hinsdale and Lake Forest at 37 percent. The suburbs of Des Plaines and Naperville, meanwhile, have just 2 percent of earners bringing in more than $200,000 annually. In Springfield and downstate Marion, the IRS reports the number of individuals earning more than $200,000 annually is less than 1 percent.

Pritzker's office claims that 97 percent of Illinoisans would save money under a switch to a progressive income tax. The governor's office makes its statement by calculating the percentage of Illinois residents making less than $250,001 annually - who would pay a tax rate of 4.95 percent or less. But those opposed to the tax increase, including the Illinois Policy Institute, have pointed out that the average Illinois family would save little under the proposal.

Figures from the United States Census Bureau peg the average Illinois household income at just shy of $93,000 annually. A family of four living off of those funds would save only $100 with a shift to a progressive tax.

A family of four with a household income of $250,000 annually would save $65 annually, calculations by Pritzker's office show.

Tentative number of households who would be paying the 7.75 percent or higher rate in Illinois taxes by the year 2021: 174,865 or about 3% of households paying income tax.

The proposal also includes a 20 percent increase in the current property tax credit for homeowners and a $100 per child tax credit for individuals who make less than $80,000 and joint filers making less than $100,000 annually.

Pritzker's office estimates the change would bring in an extra $3.4 billion in annual revenue, money that could help pay for the $41 billion capital construction plan he recently outlined. But that money wouldn't funnel into the state's coffers until two years from now. If the proposal to change the state constitution were to get on the ballot, and then get approved by voters, it wouldn't go into effect until 2021.

Thirty-three states across the country have a progressive tax, while eight, including Illinois, have a flat tax. Nine states, including Nevada, Florida, Wyoming and Texas, have no income tax at all. In the surrounding Great Lakes region, Michigan and Indiana have flat tax rates. Wisconsin's rates range from 1.6 to 7.4 percent, and Ohio's ranges from 0 to 4.99 percent.

Nationally, California tops the charts with a 13.3 percent individual income tax rate for income over $1 million.

Special acknowledgements to Will Rodrigues Horta for his contributions.