This year, in Chicago and statewide politics, African-Americans have made history in their elections to high-profile posts. Two of those officeholders have further distinguished themselves in terms of record fundraising numbers, our analysis shows. Comparing campaign cycles, Attorney General Kwame Raoul has outraised Chicago Mayor Lori Lightfoot*. Since her campaign committee was formed on May 11, 2018, Lightfoot has raised a total of $8,338,057.00.** Raoul brought in $13,313,748 from the time his campaign committee was formed in September 2017 through December 2018. 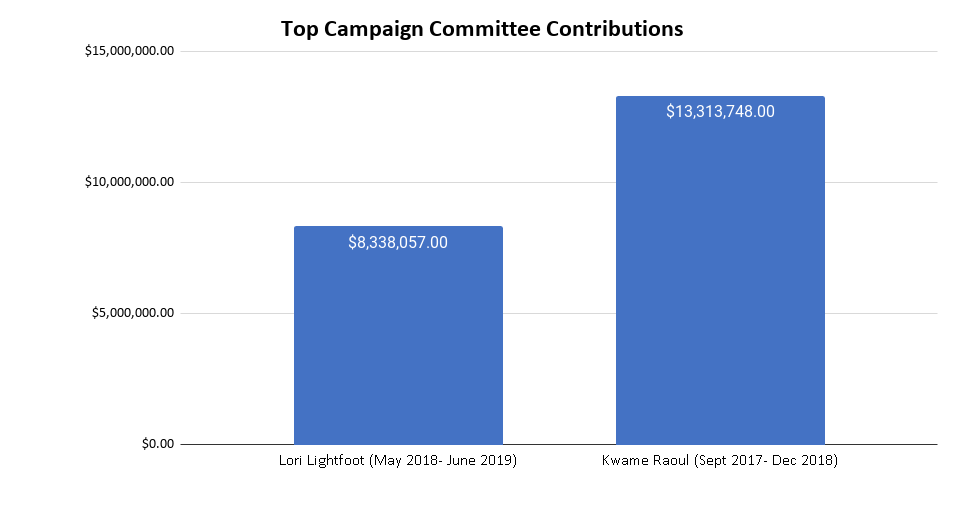 Looking back over the past year, Lightfoot has outraised Mendoza, White, and Frerichs combined.

Pritzker has set the record for spending on an Illinois governorship, contributing $173 million to his own campaign.  Pritzker has contributed 97.2% of the $177.6 million his campaign has brought in since he formed his committee in March 2017.

Billionaire governors and their ability to contribute hefty sums to members of their own party has changed the fundraising dynamic on both sides of the aisle.  During Rauner’s tenure as governor, he contributed $36.3 million to the Illinois Republican Party.  After Pritzker set up his committee, JB for Governor, in March 2017, he started contributing heavily to the Democratic Party of Illinois and democratic controlled committees.

*There are now limits on the amount Lightfoot can fundraise, now that the election cycle is over.