Analysis: Nearly $4 million has been spent on progressive tax ads. Here's how the money's shaping the debate.

Can't seem to tune out those ads about the pros and cons of a progressive tax in Illinois? Big money groups are spending millions to frame the debate that's moving quickly in Springfield, just for you. 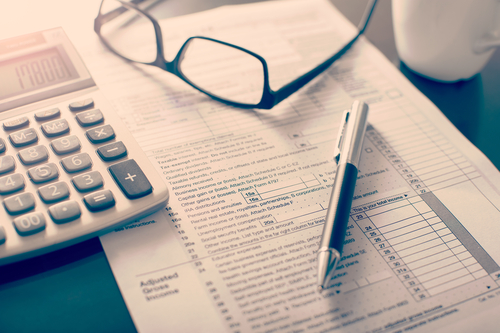 The Democratic-led General Assembly is working to approve a ballot measure that would change Illinois' income tax rate from a flat to graduated tax.
Shutterstock Image
Read the full report »

The legislative process in Illinois is often likened to sausage making - an unsavory process full of gristle packed together behind the scenes in Springfield.

But this spring, an extremely public battle is playing out over whether to amend the Illinois Constitution to allow for a graduated-rate state income tax. That proposal is only gaining speed after passing the Illinois Senate this week - a measure Democratic Gov. J.B. Pritzker says, could bring in $3 billion by taxing higher earners at higher rates. Opponents, meanwhile, say hiking up taxes will only continue to drive residents out of Illinois and provide state officials with an excuse not to rein in spending.

To follow the debate, all you need to do is turn on the nightly news on your favorite local station, where viewers are inundated throughout commercial breaks with ads for and against the issue, paid for in part by some of the state’s wealthiest and highest-profile residents.

Our analysis has found that nearly $4 million has been spent since March 18 on commercials in five media markets throughout the state - Champaign, Chicago, Rockford, Peoria and St. Louis.

Here’s our breakdown of that spending, a look at the players and how it’s reflective - or not - of the overall proposal:

Three groups have emerged that are spending money to buy ads on both broadcast and cable channels, but the pro-tax group is significantly outspending the opposition, the Center’s analysis of ad buys at local stations across the state shows.

Think Big Illinois -  a group partially funded by Gov. J.B. Pritzker and managed by members of his political operation - is pushing a progressive tax, calling it “fair and necessary,” and a practice common in a majority of other states.

‍The Coalition for Jobs, Growth and Prosperity - the umbrella organization for Ideas Illinois that's run by Greg Baise, the former president of the Illinois Manufacturers’ Association and businessman James Gidwitz - opposes a change from the state’s flat-rate structure, where the rate is currently set at 4.95 percent for individuals. Its commercials note that thanks to “misguided policies,” Illinois leads in “all the wrong categories.”

Another opposition group airing ads is Illinois Policy Action - an arm of the libertarian and conservative think-tank, the Illinois Policy Institute, led by businessman John Tillman. Its commercial says a move to a progressive tax would hike taxes not just on the rich, but on the typical family by thousands per year

The Chicago media market - the state’s largest media market where about two-thirds of the state’s voters live, goes up to the Wisconsin border, as far west as Dekalb and LaSalle counties and as far south as Kankakee County. There, a track of spending from broadcast and cable stations within the market shows Think Big has spent $2.8 million on broadcast and cable advertising over the last several weeks on three commercials - all 15 second spots. Illinois Policy Action has spent $43,236 on anti-tax ads, while the Coalition has spent $292,976 on anti-tax ads.

In Rockford, Thing Big has spent $66,111 on ads. The anti-tax groups haven’t spent any money in the market at all.

In the Peoria-Bloomington media market, Think Big has spent a total of $110,187 on cable and broadcast ads, while neither anti-tax group has spent money in that market.

In St. Louis, Think Big has spent $139,126, while the Coalition has spent $80,664 - an indication that this is a market where they think they can make a dent by spending a bit more.

‍Does it work? “These issue ads are designed to frame the issue in a way the buyers would like,” Center for Illinois Politics board member and University of Illinois Chicago Professor Christopher Z. Mooney says. “What they want is that when people hear of the issue, they think "can't trust those politicos/my taxes will rise" (anti's) or "let's make the rich pay their fair share" (pro's). While people won't like the ads - they can be weird, nasty, worrisome, and confusing - advocates use them because they work.

Mooney points out that the concept is “newish to Illinois because we often don’t vote on meaningful policy” at the ballot box. “In places where they have had frequent ballot initiatives, including California, Florida and Colorado, he says, “this sort of ad issue is a staple.”

The Illinois Senate passed a resolution by a 40-19 vote Wednesday that would amend the state constitution to allow the state to tax higher rates on higher levels of income.

The measure now heads to the Illinois House, where it must be approved by three-fifths of the chamber’s members to be placed on the 2020 ballot. To amend the state constitution, 60 percent of those who vote on the referenda question must approve it.

According to the legislation sponsored by state Sen. Toi Hutchinson of Olympia Fields, those earning $10,000 annually would be taxed at 4.75 percent. Everyone in Illinois is being taxed at 4.95 percent right now.

Starting at income levels of $250,001 or more a year, the rates start to differentiate for individuals versus couples filing joint tax returns.

Here’s a complete breakdown of the rates:

‍‍‍‍‍The corporate rate would also rise from its current 7 percent rate to 7.99 percent. Along with the legislation establishing a new rate structure, the Senate also approved measures aimed at getting legislators representing independent, swing-voting districts on board that would eliminate the state’s estate tax and prevent school districts from ratcheting up property taxes if funding obligations are being met, though it’s possible that those measures could be tweaked by lawmakers at the end of the legislative session May 31.

Proponents of a progressive tax says the state’s current flat-rate structure protects the richest of the rich, meanwhile hurting groups including the working poor and students. “You can’t raise taxes on anyone without raising taxes on everyone,” state Sen. Don Harmon of Oak Park remarked during Wednesday’s floor debate on the issue.

Mark Denzler, President and CEO of the Illinois Manufacturers’ Association, called the vote to approve the measure “yet another sign that Illinois politicians are more concerned with increased spending rather than meaningful solutions to curtail costs, address growing property taxes, tackle ballooning pension debt and adopt reforms that make it easier for businesses to create jobs.”