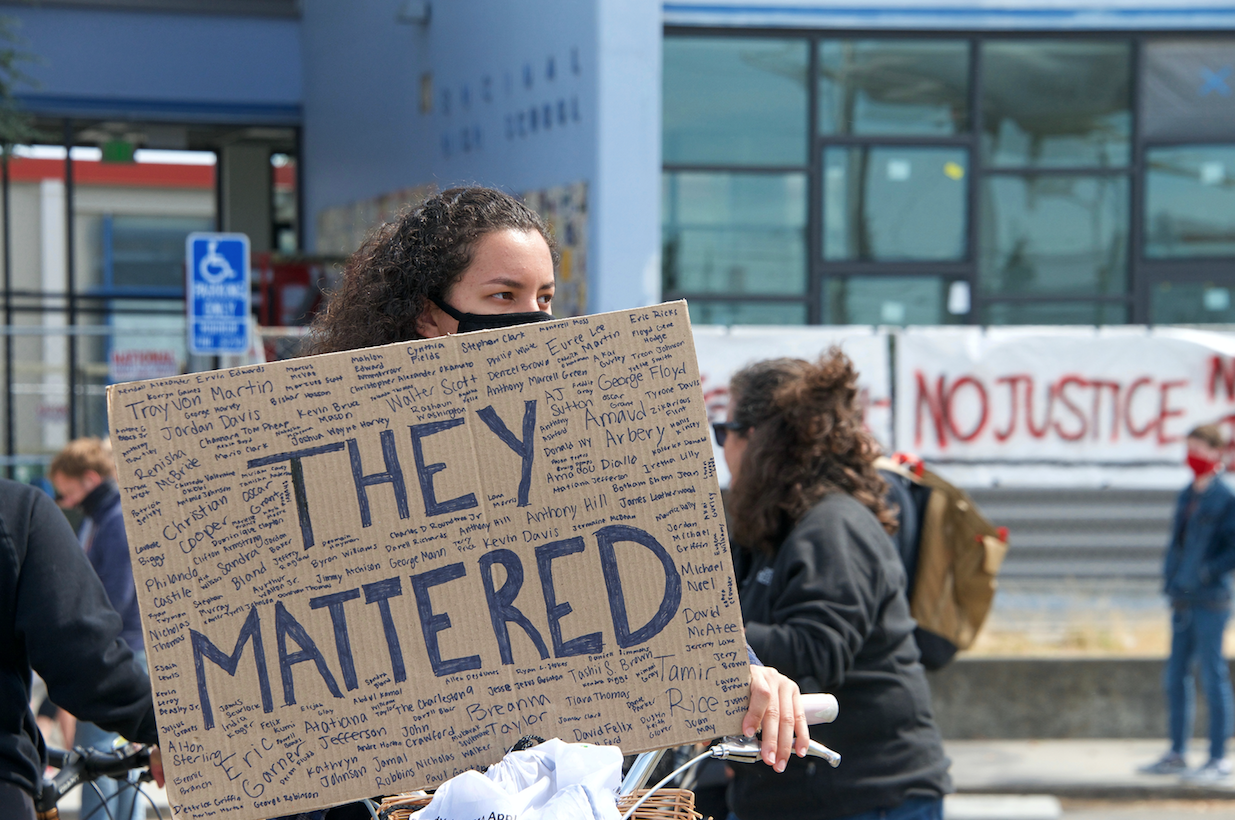 After nearly two weeks of public outcry following the police killing of George Floyd in Minneapolis, elected officials in Illinois are plotting out changes to state laws that will prevent similar abuses here:

■ Two black Illinois lawmakers called for creating a statewide system to hold police officers accountable for the deaths of unarmed black people, and they are talking with their colleagues in the Illinois Legislative Black Caucus about other potential changes the group can advocate.

■ Police chiefs and the politically powerful police unions are reviewing potential changes at the same time that some police departments face growing criticism over the heavy-handed tactics often used to respond to the swelling protests.

Rep. Maurice West, a Democrat from Rockford is one of two legislators who called for a police tracking system in a message to the political insider website Capitol Fax. In an interview West said that the black community needs more transparency from police.

“There is zero trust between this community and law enforcement. That has to be fixed,” he said. “The question becomes: how can we increase trust policy wise? The community needs accountability measures put in place. They need to know and feel comfortable with the fact that police officers, once they put on that uniform, they don’t have automatic immunity from any wrongdoing.”

The goal, West said, wasn’t to target all police, but to root out problematic officers.

“This is for the bad actors and making sure they face consequences for their actions and that they aren’t able to be protected by the system, when they’re not really protecting the community,” he said.

West said the Illinois Legislative Black Caucus will hammer out the details of such a proposal in the near future. And that meanwhile, caucus members are meeting with each other in Rockford, Peoria, Champaign and East St. Louis. They hope to come up with an agenda for a special legislative session that they want to be called in the wake of the mass demonstrations he said.

The push for more police accountability is happening in other states

Last week, New Jersey’s attorney general announced that the state would create a statewide database of incidents in which police used force. Attorney General Gurbir Grewal also said New Jersey would begin requiring police officers to obtain state licenses. In New York, legislators created a statewide database for use-of-force incidents by police last year. In the wake of the Floyd protests, Gov. Andrew Cuomo called for nationwide standards defining what justifies the use-of-force. He also said departments should release the disciplinary records of officers who are accused of misconduct.

As of this writing, Illinois’ statewide officials have not yet called for specific changes in state law. But both Gov. JB Pritzker and AG Raoul have indicated in memos to their staffs that they are working on legislative initiatives.

“The peaceful protesters have offered us a unique opportunity to push for change from inside the halls of power,” Pritzker wrote to state employees. “I feel tremendous responsibility to act – to put the same energy into pushing for reform that we put into our response to COVID over the last few months. I am already working to develop a comprehensive set of proposals – both legislative and administrative – to address racial inequities in our state that have existed since its very founding.”

He noted that he pushed legislation as a state senator that led to requirements for police to wear body cameras and use dashboard cameras. “But I’m angry at myself for having accepted pats on the back for such reforms, knowing that most abusive policing is not recorded. Part of the reason I sought the position of attorney general was to take on the challenge to do more,” he said.

In light of the Floyd case, Raoul added, his office is “actively reviewing legislation to further reform the way policing is done in this state.”

Licensing of police may be required

In an interview, Raoul mentioned several areas he’s considering. One would be requiring police officers to be licensed by the state. Currently, officers must be certified by the state, but that is mainly a process to make sure they have completed and kept up with their training. The only way police officers are decertified is if they are convicted of a felony or other serious crime. Professionals such as lawyers, doctors and even hairdressers can lose their licenses for malpractice, Raoul noted, but police don’t face the same scrutiny, even though they are legally permitted to use deadly force.

Raoul and other lawmakers considered including a licensing requirement in a major police reform law that they passed five years ago, in the wake of the police killing of Michael Brown in Ferguson, Mo. Instead, they formed a legislative commission of lawmakers and police officials to study the issue. However, that group never completed its work because most lawmakers were caught up in budget battles during Gov. Bruce Rauner’s term.

The attorney general said it’s time to revisit the issue. “I think it should happen,” he said. “We should use the energy of now to force this conversation to happen, and to create a [licensing] system.”

Another potential area for legislative action would be reform of state and local laws and policies that discourage witnesses of police abuse from making complaints. Many jurisdictions discourage people in the community from coming forward by requiring people to submit sworn affidavits for any complaints and by not investigating anonymous complaints. “We need to look at both the state and city level to see what obstacles to prevent people from coming forward.”

Raoul would also like the consequences to be made explicit when police switch off or don’t use body cameras or dashboard cameras which are required during interactions with the public. Under current law, police officers can get in trouble for violating their department’s policies if they do so, but there is no punishment set in law.

Illinois state agencies could step up to fill gaps left by the U.S. Department of Justice in investigating and advising police departments, Raoul said.

Raoul led a group of 18 state attorneys general who called for congressional leaders to give state attorneys general explicit authority to investigate police agencies showing a pattern of unconstitutional behavior. The DOJ handled such “pattern or practice” reviews from 1994 through the end of the Obama administration. Those reviews ended with consent decrees in places like Ferguson, Cleveland and Baltimore. But the Trump administration has largely backed away from the practice, which is why the 18 attorneys general wanted Congress to grant states the authority to conduct such reviews.

Similarly, the DOJ under President Donald Trump has backed away from an Obama-era initiative to help police departments voluntarily review their practices through the Justice Department’s Office of Community Oriented Policing Service (COPS). Raoul said it might be time for the Illinois Law Enforcement Training and Standards Board to fill in the gap, by promoting best practices for police departments.

Outside the statehouse, Raoul has pushed for the Chicago Police Department to comply more quickly with the terms of the consent decree the department entered into with the attorney general’s office following the police shooting of Laquan McDonald. He said the Chicago consent decree could be a “blueprint” for other Illinois police agencies that are looking to improve. That includes departments reexamining their use-of-force policies, ensuring accountability within their disciplinary processes, and making sure police officers can access mental health services without jeopardizing their careers, he said.

In Illinois, some of the most significant changes to monitoring police conduct came five years ago, when lawmakers passed legislation called the Police and Community Relations Improvement Act. (Raoul was one of the chief sponsors of the law as a state senator.) Among other things, the law:

Charles Gruber, a former police chief in Elgin and South Barrington who has helped the U.S. Department of Justice investigate police agencies for civil rights violations, said Illinois could impose much stricter standards.

“There has to be transparency and oversight of use-of-force throughout the state of Illinois,” he said.

But doing so will require coming up with a statewide definition for the use of force, requiring departments to report and investigate those incidents and having some statewide oversight to make sure those rules are followed. “There’s a lot to this, but it is doable,” Gruber said. “Every department that I ran did it.”

Gruber, like Raoul, said the training board should be given more responsibility. The board, he said, should review officers’ uses of force and citizen complaints. It should identify officers for early interventions. “There should be a hearing with that officer [where they] say, ‘Look, do this again, and we’re going to yank your license and you’re going to be gone.”

Ed Wojcicki, the executive director of the Illinois Chiefs of Police, said one tool lawmakers ought to consider using is an FBI database on use-of-force incidents. The federal database is voluntary, and since it went online in 2019, it only covers agencies that employ 40 percent of police officers in the country. But the Illinois association is encouraging its police departments to participate.

“We think there needs to be not only a statewide, but a national way of tracking these kinds of incidents,” he said.

But even if Illinois were just to keep track of police killings and in-custody deaths, there are several considerations that should be kept in mind, said Chris Southwood, president of the Illinois Fraternal Order of Police, a union.

While West, the Rockford legislator, suggested the state track officers involved in the deaths of unarmed black residents, Southwood said tracking should be “all-inclusive and not limited by race or only to incidents involving unarmed persons.”

State officials should also examine injuries to officers, the levels of resistance they encounter, and the criminal history of those involved when reviewing those cases, Southwood said.

“Any initiative of this type,” he added, “must be fully funded all the way down to the local level. Another unfunded mandate will prevent full and accurate reporting.”

But getting big changes through the legislature will not be easy. Police unions have traditionally opposed such measures, and they are powerful both in Springfield and with elected local leaders who oversee police departments.

West, the Rockford lawmaker, though, hopes the General Assembly can move quickly. “There are a lot of initiatives we’re bringing forward that may sound new to the general public, but it’s legislation that’s been filed by various black legislators for years, and it just doesn’t go anywhere,” he said. “There’s no reason for those not to be at least up for negotiation. Not in this climate, not with what’s going on in our communities. They’re really showing us and telling us how they’re feeling. We have to stop compromising about it and talking about it and start taking action.”