Turning the tables: Female lawmakers and their agendas, a year after #MeToo

Women have sponsored some of the biggest bills in Springfield this session. That’s cause for celebration and continued frustration - they detail why. 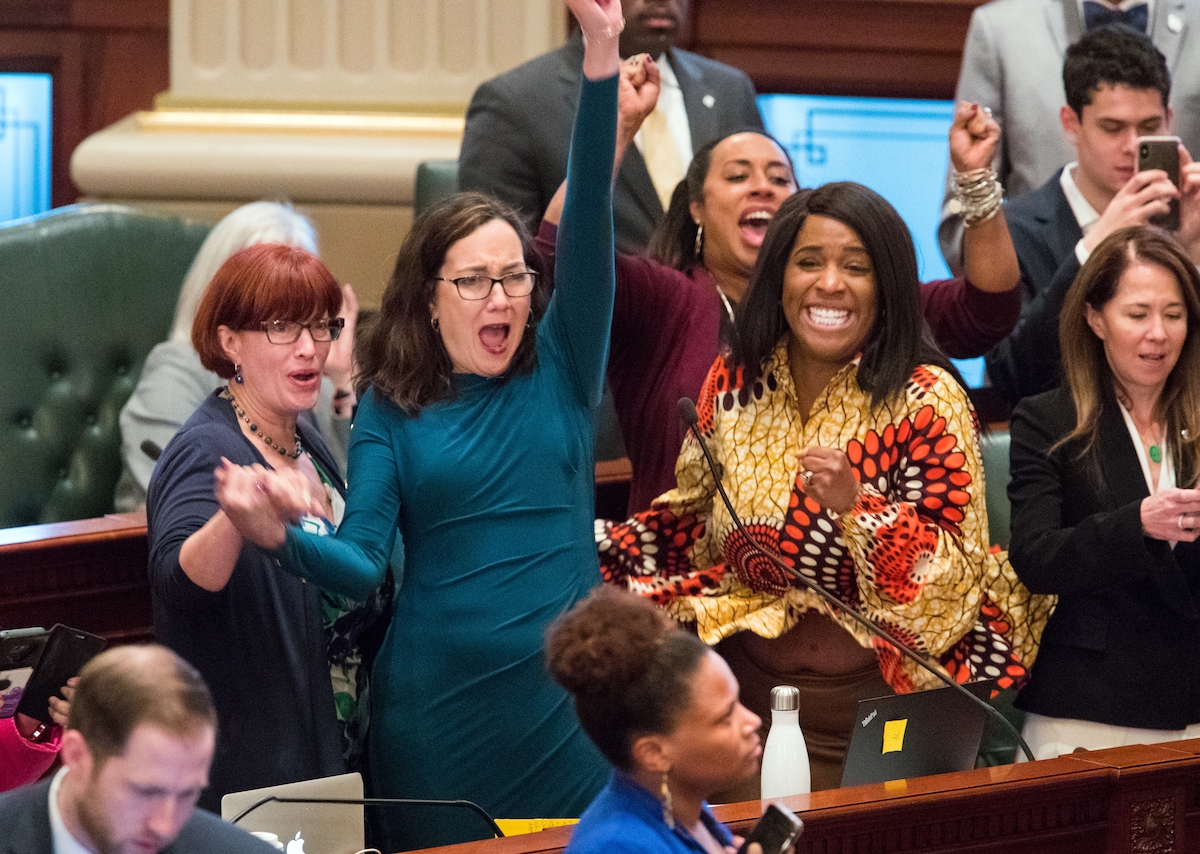 A decade ago, former state Rep. Elaine Nekritz's vote against powerful House Speaker Michael Madigan's rules was widely viewed, as she puts it, "as a big bold statement to make."

That is especially true for a woman in a place that's been likened to the Land of Oz, complete with a sign in the speaker’s chief of staff's office reading "Nobody gets to see the Wizard. Not nobody. Not no how."

Last year, that sign and the chief of staff were removed as the #MeToo movement rocked the Illinois State Capitol, a place where a rampant culture of sexism and misogyny has been allowed to fester for decades.

Yet, this spring, some of the legislature's most outspoken female members are shepherding through the biggest pieces of legislation this session. What's more, the bulk of the General Assembly's biggest bills this session have been sponsored by women, including a progressive income tax, recreational marijuana, legislation easing restrictions on abortion and improving access to contraception, a $15 per hour minimum wage and more.

It's a classic chicken-or-egg question: Has the atmosphere at the Capitol changed as a result of the #MeToo movement, or was the momentum for change inevitable?

In some cases, women are making their voices heard and seizing opportunities in a bolder way than ever before, leveraging the power that comes from publicly questioning the status quo in both subtle and overt ways. And more are banding together and reaching across the aisle to work in a more collaborative way than customary in the Capitol, even as frustration remains.

Democratic state Sen. Melinda Bush, livid that her omnibus sexual harassment bill aimed at thwarting harassment in the private sector was stalled in the House without explanation, charged onto the chamber floor recently for a verbal confrontation with House Majority Leader Greg Harris and state Rep. Kathy Willis. And she cornered Madigan at his annual yacht club fundraiser.

"I said, 'I just want to say to you, you and I have always had good conversations, and I did not intend for it to blow up the way it did.' I really want to get this bill done, and see what it is I can do to move this forward,” Bush said.

She called her strategy "pressure with respect."

And state Rep. Kelly Cassidy, who last year said she felt targeted by the speaker for criticizing his office's handling of sexual harassment claims, was the chief House sponsor of the recreational marijuana bill and reproductive health legislation in the notoriously tightly-controlled chamber.

Statehouse insiders say that's a calculated move by the speaker, who was shocked to learn of allegations made against key staff. In recent months, he has made a concerted effort to publicly demonstrate the change necessary for political survival, admitting that, in the past “I didn't do enough" to combat sexual harassment. Madigan, also the state's Democratic Party chair, fired several key governmental and political aides, named a new female chief of staff, formed a statewide harassment panel led by three women (including Bush), hired outside counsel to investigate harassment complaints and met with more than 100 women to hear about their experiences, rewrote policies for staff, among other changes.

Illinois ahead of national average

According to the National Conference of State Legislatures, 2,117 women are serving in state legislatures across the country, with women making up 29 percent of legislators nationwide.

And Illinois' percentage of female legislators - 36 percent - ranks near the top, largely due to the increases of Democratic female lawmakers elected in the House and Senate - a trend mirroring the "blue wave" that sent a diverse crop of female lawmakers to Congress in November. Yet, at the same time, Illinois is one of only a handful of states without a woman in a legislative leadership position, after longtime House Majority Leader Barbara Flynn Currie retired in January.

"One of my favorite quotes is (Margaret Thatcher's), 'if you want to get something said, ask a man; if you want to get something done, ask a woman.' The work during this session epitomizes that," said Sen. Heather Steans, who sponsors the recreational marijuana bill in the Senate. "We've put our noses to the grindstone, we don't care about the credit and we're happy to collaborate with everybody.”

Cristina Castro, who co-sponsors the Reproductive Health Act, which seeks to remove restrictions on late term and partial birth abortions, and expands insurance and contraceptive coverage, says much of the newly collaborative atmosphere is due to having female chiefs of staff in the speaker, Senate President  and governor's offices.

Republican Sen. Sue Rezin - one of just two female GOP senators - says she draws strength from her chamber's recently formed bipartisan women's caucus, which meets once a month, as she puts it, "to work on policy and take the politics out of it," on issues it deems important to women.

Rezin calls women leading on key issues a "step in the right direction but it’s unfortunately taken 20 years to get to where we should have been. I am frustrated, we don't see enough change, and it's still a constant conversation of what's acceptable, and what's not acceptable.”

Nekritz, who after leaving the legislature spent time leading the Illinois Women's Institute for Leadership Training Academy, said women don't come into the training program for elected office with naive assumptions these days.

"Most of those women have experienced (sexism in their worlds) and so they bring that background and knowledge to the next phase of their life,” she said. “People are talking about it so much, I feel like they have each others' backs."