Illinois Unions: IEA might be the biggest, but Liuna, SEIU, others write bigger checks. 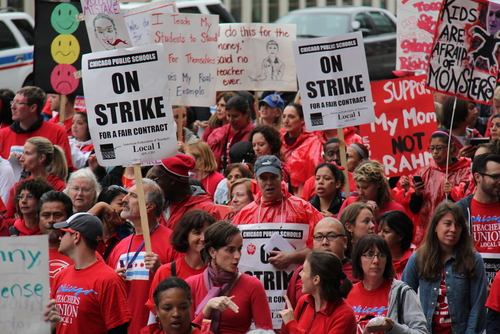 Mayor Lightfoot speaking at the Economic Club of Chicago on December 9, 2019.
Image Courtesy of Shutterstock
Read the full report »

Union memberships in Illinois are down by roughly 165,000 members since 2009, the State of the Unions 2019 report released in recent days by the Illinois Economic Policy Institute found. But Illinois still has higher membership rates - and clout - than is seen on average across the country.

As several of the state’s most powerful labor unions are taking part in contract negotiations and putting their dollars behind candidates’ campaigns, we’ve taken an in-depth look at how they’re flexing their muscles:

Here’s a look at the state’s 10 largest labor unions by size, and the money they contributed to political campaigns in 2018, according to filings with the U.S. Department of Labor. The largest, by far, is the Illinois Education Association, with more than 137,000 members. But the Laborers International Union of North America has spent the most - nearly $6 million.

Here’s a look at some of the faces leading the state’s biggest unions:

Chicago Teachers Union Local 1 which has been without a contract with the City of Chicago since July. Mayor Lightfoot extended an offer including features provided by a fact-finder report. Despite the offered pay increase of 14% seeing an increase to 16% (along with better benefits, this would amount to a $351 million contract), the CTU rejected this. Much of this centers on non-instructional staffing like librarians, nurses, and counselors in addition to smaller classes and better support for special ed and bilingual students. Mayor Lightfoot has said she’d support these measures outside of the CTU contract. Here’s some more context from the Sun-Times.

AFSCME Council 31 agreed to a new contract with Gov. Pritzker in June following four bitter years of little discussion with Gov. Rauner. Its components include:

At O’Hare, SEIU Local 1 negotiated three-year contracts for “baggage handlers, cabin cleaners, wheelchair attendants, and other low-wage airport workers” in July resulting in better wages and working conditions. This followed a strike in 2016 on Thanksgiving and a city ordinance the following year that set new labor requirements for O’Hare subcontractors. The Sun-Times adds that workers will receive about $8,000 throughout the three-year period along with better benefits. They also explain SEIU Illinois State Council gave $100,000 to Mayor Lightfoot, though it doesn’t say if this was for the past election or for future campaign funds.

UAW Local 551 is in charge of negotiations specific to Chicago-area auto plants. Bargaining focuses on the common themes of wages, benefits, job security, etc. The deadline to reach a deal is September 15. More on this from the Sun-Times.

Nurses at the University of Chicago Medical Center have been voicing concerns for months about “unsafe working conditions and inadequate staffing.” The nurses are represented by the National Nurses Organizing Committee/National Nurses United, the largest nurses union in the country. Nurses have also authorized a one-day strike and will continue negotiations on September 5 and 6.

By the numbers in Illinois: