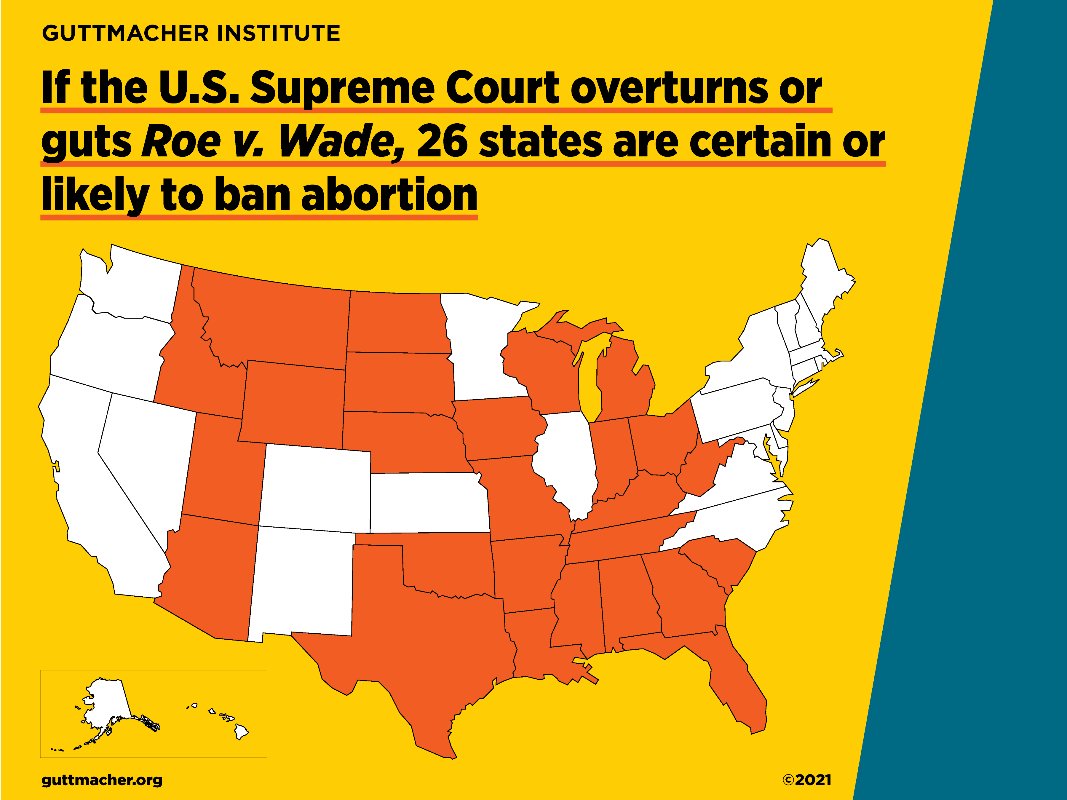 Earlier this month, after oral arguments in one of the most significant abortion cases in years, the U.S. Supreme Court seemed poised to uphold a Mississippi state law, which bans abortions after 15 weeks of pregnancy. The discussion and debate over this case, which started long before oral arguments began, will continue until the Supreme Court issues a ruling, expected in June of 2022. Either way, their decision will greatly affect Illinois, with huge consequences if the decision overturns Roe.


The case, Dobbs v. Jackson Women’s Health Organization concerns a state law enacted in 2018, banning abortions beyond 15 weeks of pregnancy. A ruling in favor of this law would be at odds with the viability issue in the 1973 landmark abortion case of Roe v. Wade in such a way that it could shift the abortion debate away from the federal jurisdiction and put it more squarely under state purview.


The Supreme Court ruled in Roe that abortions could take place before the fetus was viable, determined to be at around 23 weeks, a holding that was affirmed by a later ruling in 1993’s Planned Parenthood v. Casey case, which prohibited states from banning abortions before fetal viability. The Dobbs case presents a 15-week parameter, and so a ruling in favor of that timeframe could run counter to the viability considerations in Roe (and affirmed Casey), possibly creating the interpretation that the states can establish their own timeframes to allow or disallow the procedure.


If the Supreme Court strikes down Roe in their decision on Dobbs, The Guttmacher Institute predicts that, across the nation, 26 states are certain, or likely, to ban abortion – and that includes every one of the six states that border Illinois. The implication of being one of the very few states in the middle of the country with some of the least restrictive abortion rules could mean more women coming to Illinois to get access to the procedure.


In this scenario, according to the Illinois Right to Life Executive Director, Amy Gehrke, “Illinois will become an abortion haven,” something that her group and others have vowed to work very hard to reverse.

Jennifer Welch, President of Planned Parenthood of Illinois also predicts the state could likely become one of the few places in the Midwest to provide abortion services, something she sees as problematic for different reasons. “When it comes down to it, your access to healthcare shouldn’t come down to your zip code,” Welch said.


As President of Planned Parenthood of Illinois, Welch and her allies have noted the trend of restrictions on abortions, especially recent ones, and have built clinics in Waukegan, along Illinois’ northern border with Wisconsin, and in Flossmoor, near the eastern border with Indiana. The location of these centers is not random.


The statistics support the assumption that more women from out of state are coming to Illinois for abortions, even as the total number of abortions in the state decline. According to the Illinois Department of Public Health, in 2012 of the 3,138 out-of-state patients were among the total of 43,203 abortions provided, and in 2018 (the most recent date for data) that ratio was 5,668 to 42,441. Since then, Texas enacted its “heartbeat bill” restricting abortions to 6 weeks just this past spring, and due to that, Welch estimates the out-of-state numbers have increased by 30 percent.


Illinois Right to Life’s Gehrke agrees that Illinois will experience an increase in out-of-state abortion services if Dobbs is upheld and the prospect is worrying. Gehrke asserts that lack of oversight in Illinois, due to measures like the Reproductive Healthcare Act, has created a situation where “nail salons have tighter regulations than abortion clinics.” And, if abortion is prohibited in surrounding states, “travel to Illinois for abortions will only continue to increase and so will maternal deaths.”


Welch maintains Planned Parenthood focuses on providing the best patient services and care, “We work really hard to provide access to care, to make sure our doors are open, and that we are here to serve them, regardless of the outcome of this case.”


“We’ve been preparing for this day for years,” Illinois State Rep. Kelly Cassidy


Others don’t relish the prospect of Illinois becoming a haven either, like Illinois State Rep. Kelly Cassidy (D-Chicago), but, if it does come to that, she plans to continue efforts to make services accessible. “I’ve been saying for ten years now that (overturning Roe) isn’t an “if” but a “when” and I and others have worked to ensure and strengthen laws that provide access and insurance coverage so we can mitigate the fallout.”


First up in 2017 was HB40, sponsored by Sen. Heather Steans and Rep. Sara Feigenholz. This measure removed the widespread “trigger” provision, which could automatically outlaw abortion and certain forms of birth control if the Supreme Court were to modify or overturn Roe (these are common and on the books in several states).


Next up was the Reproductive Healthcare Act (RHA) in 2019. Rep. Cassidy and Sen. Melinda Bush sponsored this legislation, which Governor JB Pritzker signed after commenting it “ensures that women’s rights in Illinois do not hinge on the fate of Roe v. Wade or the whims of an increasingly conservative Supreme Court.” Cassidy explains the legislators’ focus was on putting the procedure in a public health context rather than criminal, ensuring dated elements like spousal consent requirements don’t apply, and removing automatic reversals that could set women’s progress back.


The last of the recent legislation to shore up statewide abortion protections in the event Roe was overturned was the rejection of the Parental Notification Act (PNA), championed by Senator Elgie Sims (D-Chicago), which was recently signed by Gov. Pritzker’s signature. Pro-life groups, clergy, and others fought to keep the provision, which required parental notification of a minor’s abortion procedure. On the debate floor, Sen. Sue Rezin (R-Morris) argued to keep parental notifications, saying, “Young children should not have to make these major medical decisions and emotional decisions alone without the support of people who are meant to care for them.”


Gehrke points to the repeal of PNA, which she calls a “common-sense law,” as another move by pro-choice advocates to lower standards of care and move the state in an extreme direction. “How is this good to have minor girls in Illinois and beyond obtaining abortions?” she asks.


“There are a lot of half-truths about this, and it’s overblown,” said Cassidy, who supported the repeal of parental notification. “The young people we are protecting cannot seek that [parental] advice and support.”


In a recent article, the New York Times presented data on the profile of a person seeking an abortion, which could provide insight into who may be crossing state borders to come into Illinois for services.


According to the report, “the typical patient, in addition to having children, is poor; is unmarried and in her late 20s; has some college education and is very early in pregnancy.” The article contains data showing abortion patients are most likely to be mothers – 60 percent report having at least one child at home, and an overwhelming number, 92 percent, seek the treatment within the first 13 weeks. The majority, 57 percent, are aged 20-29, followed by 20 percent in the 30-34 age range.


The prospect of 26 states eliminating abortion could require this profile patient to travel hundreds of miles for services, unless a combination of a low-tech communication platform, high-tech medical innovation, and the pharmaceutical industry can disrupt this traditional care system.


This prospect became reality on December 16, 2021 when the Food and Drug Administration (FDA) announced it will permanently allow patients the ability to receive abortion medication by mail with an online telehealth visit, eliminating the need for in-person visits with specific health care providers.


The FDA said its decision will “reduce the burden on patient access and the health care delivery system.”  The announcement means the combination of medications Mifepristone and Misoprostol, which are used to terminate pregnancies up to 10 weeks (and prior to the pandemic, required a visit to a doctor’s office), can be prescribed and sent to patients without traveling to an office or pharmacy. For some of those seeking abortion services, this development could streamline finding appropriate care.


Not unexpectedly, there are already calls to ban these medications by pro-life groups, their cries joining pro-choice advocacy groups’ strenuous objections of court rulings in Texas and likely from the Supreme Court. One thing is for sure – the debate that has been going on since well before the 1972 Supreme Court ruling in Roe will continue to be both challenged and protected by advocates and everyday people. But, the FDA decision, and other developments like it, do have the potential to re-shape the debate, change the landscape and shift the emphasis – which would have a big impact on Americans across the nation, as well as in Illinois.

Illinois Politics Preview: What to watch for in 2022