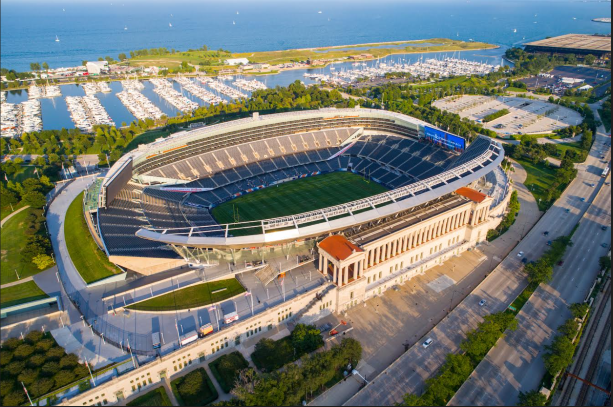 Few people outside of Halas Hall may know how serious the Chicago Bears are about moving to Arlington Heights, but it does leave public officials with a big, unsettling question: Will taxpayers be on the hook for a new stadium in the suburbs or improvements at the Bears’ current home at Soldier Field?

“I would love to see the Bears come here. I think it’s a net positive,” says State Rep. Mark Walker, a Democrat from Arlington Heights. “I also don’t want to be in the position of the public bankrolling it all.”

“If [the Bears] can make a reasonable deal that can survive without state support or local tax support, but they need a little extra at the end to make it really an outstanding project, we'd be willing to talk about that,” he says. “But we aren’t going to bankroll the whole thing. That’s ridiculous.”

“We have a lot of other things we need to do with the money that we have, and building a sports stadium is not high on my list,” she says. “If that’s part of the proposal, then I’d have a problem with it.”

Of course, it’s not clear how serious the Bears are in pursuing a suburban stadium. The franchise has famously flirted with various locations outside the city limits over the decades: Elk Grove Village, Hoffman Estates, Aurora, northwest Indiana and even the exact same piece of land in Arlington Heights. The Bears dangled those prospects out, only to secure better accommodations in the city of Chicago.

Walker initially thought that’s what the Bears were doing in this case, too. Now, he’s not so sure. He says many of the people involved with the potential sale are the types of people who have access to enough capital to pull off a deal.

One disadvantage of a suburban location, though, would be that a smaller municipality wouldn’t be able to afford building a new stadium, while the Chicago Park District owns Soldier Field. So a suburb would need the Bears to pay for the majority of the stadium themselves, or it would likely look to the state for help.

State lawmakers in 2001 helped the Bears renovate Soldier Field by authorizing the Illinois Sports Facilities Authority to issue $387 million in bonds to pay for the project. And lawmakers created the authority in the first place in 1987 to build a new stadium for the Chicago White Sox.

But sports economists warn that it makes little economic sense for the state to pay for a new stadium. Most of the people who go to Bears games are from the Chicago metropolitan area, and that will be true whether the stadium is on the lakefront or in the northwest suburbs. So the vast majority of the money spent at Bears games is money that local residents would have spent on local businesses otherwise, the economists argue.

“A football stadium is such an economic loser,” says Allen Sanderson, a professor and sports economist at the University of Chicago. “It’s not a catalyst for economic development. You have this giant facility that’s always closed, surrounded by a sea of asphalt parking lots. Nobody wants to build next to that.”

And Rob Baade, a sports economist at Lake Forest College, says the “walled cities” that stadiums have become don’t even help much on game day. That’s because football fans usually drive in for the game and drive out when it’s done, which means they don’t patronize local hotels, restaurants or businesses.

The same logic would apply whether the Bears ask for public money to expand Soldier Field – the smallest stadium in the NFL – or build a new stadium, the economists say.

Sanderson, from the University of Chicago, is dubious that the Bears even need more seating capacity. The vast majority of revenue that NFL teams take in is from television contracts, which the league divides up among its teams. Even local revenues coming from ticket sales and concessions is split 60-40 with the league.

That means the location, capacity and amenities of the stadium won’t have a huge effect on the bottom line for the Bears, Sanderson says. “It doesn’t matter much whether they’re playing in Soldier Field or the middle of Lake Michigan.”

Public officials should realize that the leverage they have over the Bears, as well, says Baade from Lake Forest. Because TV revenues are so important, the NFL does not want an area like Chicago, the third-biggest media market in the country, to go without a team.

“The idea that franchises located in the biggest media markets in the country would be inclined to leave any one of those locales, I think, is pretty naïve,” Baade says.

Often, governments subsidize sports stadiums so politicians can save face, he adds. “You don’t want to be the mayor of a city who loses a team on your watch. It would be politically devastating, or, at least, that’s the perception of officeholders,” he says. “Mayor Daley didn’t seem frightened by that, because he knew he held the trump card in negotiations with the Bears.”

In Chicago, Mayor Lori Lightfoot initially scoffed at the idea of the Bears moving to the suburbs, noting that the Bears have a contract to play at Soldier Field until 2033.

“This is clearly a negotiating tactic that the Bears have used before,” she said. “Like most Bears fans, we want the organization to focus on putting a winning team on the field, beating the Packers finally and being relevant past October. Everything else is noise.”

But the mayor has since taken a softer stance. She said she doesn’t know exactly what the Bears want, but she was willing to make some accommodations. “There is some interest in improving the fan experience at Soldier Field, and [the Bears] being able to maximize the profitability of the stadium. And I’m totally supportive of that.”

In Arlington Heights, the question isn’t simply a matter of whether to build a Bears stadium or not. There are other potential uses for the site, now that Churchill Downs announced it is selling the horse racetrack and surrounding facilities.

Walker, the state representative, says local residents are generally excited about the possibility that the football team would take over the site of the Arlington International Racecourse. The 326-acre property is a triangle-shaped parcel with major roads on all three sides. That would keep traffic on game days away from residential neighborhoods, he says.

Other bidders have different ideas for the site. One wants to keep horse racing. Another has proposed an entertainment complex. The site could also be used for multiuse development.

Gillespie, the state senator, says she hopes whatever is next for the property will fit in with the rest of the community, including downtown restaurants and entertainment venues.

“There are several different things that that property could be used for that would be very appropriate and beneficial to the community. It’s just finding the one that’s the best fit,” she adds. “I hope that Churchill Downs will take that into account as they’re making their choice.”