Note from Millner included in Obama car that's being auctioned off

As Elmhurst Police Chief in the early 2000s, John Millner had an idea he thought might help a young state senator's anti-profiling legislation to pass. The rest is history. 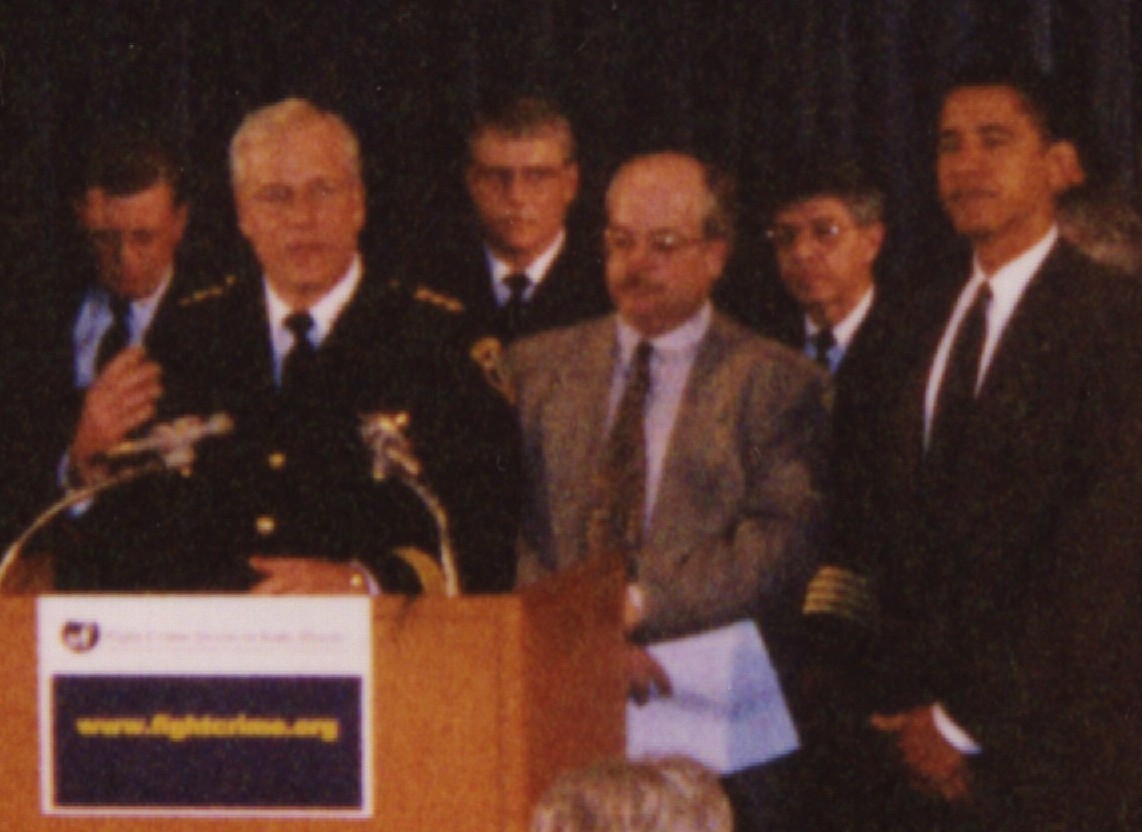 John Millner, then Elmhurst Police Chief, at a press conference about early childhood education with then state Sen. Barack Obama. It was around this time that Millner left Obama a note that would become lodged in the president's glove compartment for years to come.
John Millner photo
Read the full report »

The 2000 Jeep Grand Cherokee that was President Barack Obama’s first new car goes off to auction Wednesday, and with it, a slew of items belonging to its former owner in its glove compartment.

Among the parking receipts, sandwich orders and business cards is a handwritten note from Center of Illinois Politics co-founder John Millner.

“Senator Obama, I wanted to discuss a few ideas about the (anti-) profiling bill,” wrote Millner, who was then Elmhurst’s Chief of Police. “I’d like to see it work. Please call me at your convenience.”

That legislation, first introduced by a group of black Democratic senators in 1999, had stalled in the Republican-led Senate.

Millner was friendly with the young, charismatic senator from Hyde Park at the time he was President of the Illinois Association of Chiefs of Police and co-chair of Fight Crime, Invest in Kids.

“Regarding the note specifically, I personally believed we had to research traffic stops to see if racial profiling was a real or perceived issue.  I thought I had suggestions and some cool ideas on how to proceed."

While Millner says he doesn’t remember if any subsequent conversation occurred about the issue with Obama, the bill eventually passed. NBC Chicago noted in a 2013 article that Obama lobbied the Fraternal Order of Police and tweaked the bill to include a four-year state study of traffic stops that took detailed records of every driver’s race, and mandated diversity training for police officers, removing some of the punishments for officers that had been included in previous versions of the bill. It passed in 2003, the same year Millner began serving in the Illinois House, before he was elected to the Senate in 2005.

The Daily Mail reported Monday that Obama’s former Cherokee, which has more than 130,000 miles, will be auctioned off Wednesday in Westport, Connecticut by University Archives. It’s expected to fetch at least $50,000.

After Obama sold the car, it was purchased from a used car dealership by a woman who recognized the name of the title’s owner as the U.S. Senate candidate who had garnered national attention by giving a speech at the Democratic National Convention that year. She auctioned the vehicle off after Obama was elected president in 2008.