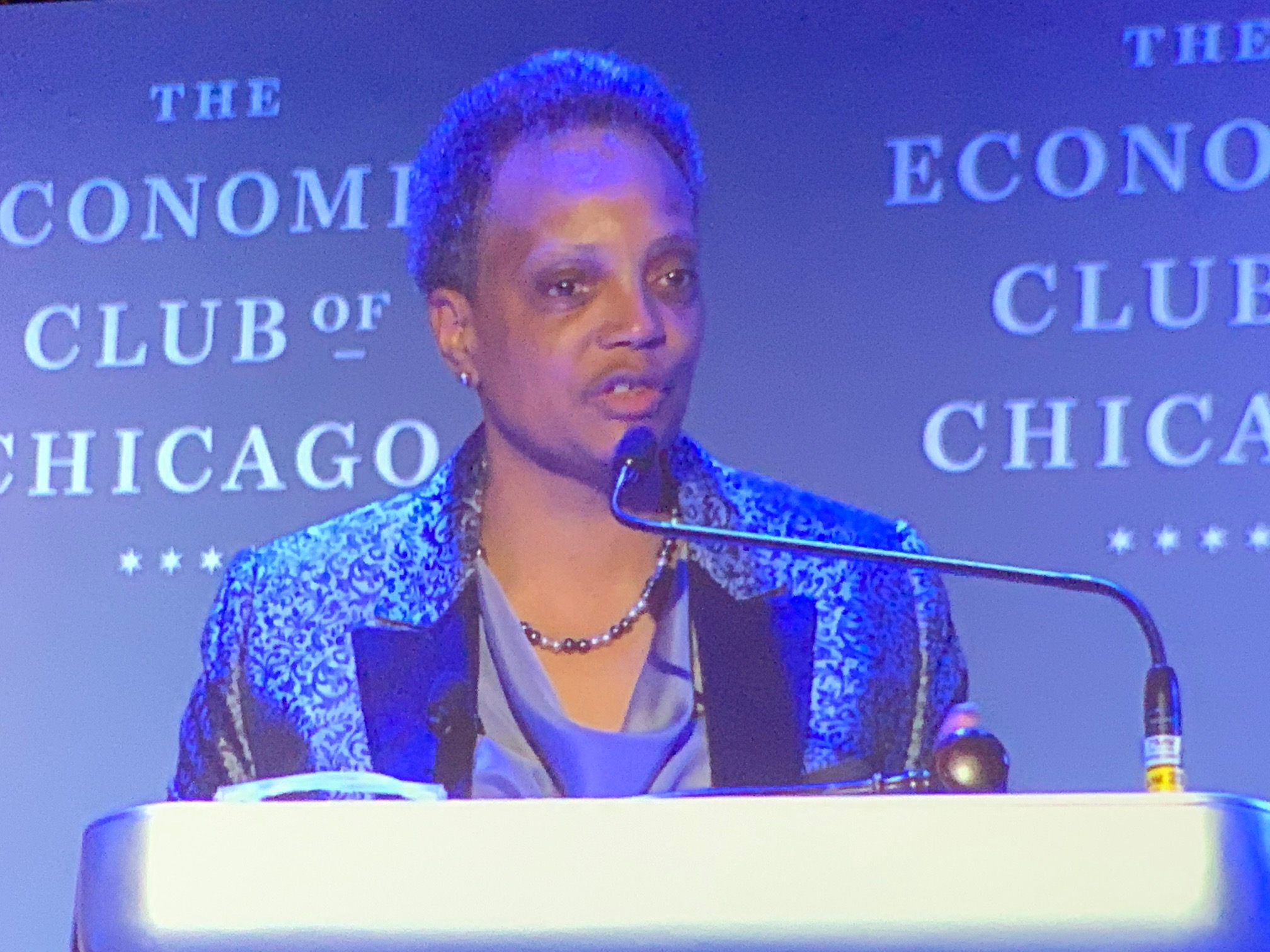 Mayor Lightfoot speaking at the Economic Club of Chicago on December 9, 2019.
Read the full report »

In the months since assuming office as Mayor of Chicago, Lori Lightfoot has taken City Hall by storm. She is Chicago’s first Mayor in memory with no connections to the Democratic Party power structure or its allies.

In her very first City Council meeting, Lightfoot cut once-powerful Ald. Ed Burke down to size, dismissing his point of order as a challenge to her authority. Lightfoot’s hand-picked slate of Council committee chairs was approved on a voice vote, dismissing any talk of a Council rebellion. And while Lightfoot endured a bitter Chicago teachers’ strike, it was settled with less acrimony than the walkout her predecessor Rahm Emanuel suffered.

In addition, Lightfoot angrily fired former police superintendent Eddie Johnson in public for lying about the circumstances under which he was found asleep in his car. And she stood up to teachers’ union bosses, forcefully insisting CPS wouldn’t make up all the class days lost in a school strike.

Most of all, Lightfoot proved that despite her political inexperience, she was no lightweight when it came to projecting mayoral power.

“We have a tradition of strong mayors, whether Harold Washington or the Daleys,” said UIC political science professor and former alderman Dick Simpson, a Lightfoot supporter. “The expectation is that the fifth floor is going to have a lot of control over what’s going on, that mayors will have strong opinions and have their policies carried out. It’s in the Chicago tradition but it’s different to have a black woman being in charge and doing it.”

But one area where the diminutive new Mayor has not been a giant killer is in Springfield.

Lightfoot took office staring a huge $838 million budget deficit in the face, far larger than the $252 million budget hole the Emanuel administration had claimed. Much of the bigger budget gap was due to higher required contributions to pension funds.

Lightfoot immediately appealed to Springfield for help. In a dramatic break with recent tradition, she twice personally traveled to the state capital to meet with Gov. JB Pritzker and legislative leaders on both sides of the aisle. That’s something neither Emanuel nor Mayor Richard M. Daley ever did.

“She was received well,” said House Minority Leader Jim Durkin (R-Burr Ridge). “People are very curious about her because she’s not what you’d expect from someone in that position. She’s not a politician. They find her very refreshing. She wasn’t sent by the Democratic organization, not propped up by the unions. She won an amazing election based on her own strength, her own smarts.”

But Lightfoot’s charm offensive failed to produce tangible results. Neither proposal moved forward. Despite her successes on home turf, Lightfoot struck out in Springfield. Insiders say a variety of factors played into the lack of action, including poor timing. After no movement in the regular legislative session, Lightfoot went back to try to move the needle in the short veto session.

“The Mayor did not win in the veto session, but you’re talking about six days here,” said House Majority Leader Greg Harris (D-Chicago). “It’s a short window and those are big items.”

Harris cited the complexity of re-arranging the massive gambling expansion measure as another roadblock.

“Anytime gaming comes up in Springfield…casinos, racinos, horse betting, sports betting…they all come into play. And whenever Chicago wants something, other jurisdictions say, we’d like consideration for our requests too. So Elgin, Joliet, Aurora jump in, which makes coming to a deal much harder.”

Republicans said the timing was bad for another reason: a widening federal investigation involving gaming.

“There was this terrible scandal that’s getting worse and worse by the minute. Rep. Luis Arroyo (D-Chicago) was trying to buy off a state senator who’s wearing a wire for the feds, in exchange for his support on a video gaming bill. They didn’t feel comfortable reopening gaming when we had this ridiculous, filthy transaction that was just revealed to the public with Arroyo. People were kind of spooked about that and it revolves around gaming. The raw timing and brazen nature of how Arroyo’s arrest went down put everybody in a state of utter confusion.”

Meantime, the real estate transfer tax increase proved to be a tough vote for some downstaters and Republicans on policy grounds.

“It’s a vote for a newer, larger tax and that’s something a lot of reps don’t want on their record,” said Harris. “Some people saw that as a potential property tax increase vote. Some just don’t want any tax increase anywhere. Period.”

Durkin said House Republicans weren’t in any mood to offer Chicago help on the issue. “We just voted to raise the gas tax. Just coming off that vote, our caucus was not embracing the real estate tax. We felt that was a Democratic issue and if they want to do it, they have the votes to raise it on their own. But it wasn’t in the cards for us.”

In the end, the lack of additional Springfield revenue didn’t deter Lightfoot from passing an $11.65 billion 2020 city budget. Lightfoot’s financial team found other sources to fill the gaps.

“The way they put the budget together was very shrewd,” said Harris. “While making those requests, they put together a budget that didn’t depend on them. They can come back in the spring and try again.”

Lightfoot fully intends to do just that, attempting to pass both revenue measures when the legislature re-convenes in January. And insiders predict her prospects may improve, especially regarding the Chicago casino.

“Chicago will get another crack at this,” Durkin said. “I’d recommend to the speaker we can fast track this and get it done. I think there should be some modification of this tax rate for Chicago. I don’t think it will be that heavy a lift as we go down the road.”

Simpson is even more optimistic. “I think with the Governor’s help and some compromises, she will get those changes (transfer tax and casino tax). I think both will happen.”

After winning a historic election, Harris says Lightfoot will now be judged on whether she can deliver as an administrator. And that will require cash from Springfield.

“People I talk to are glad she’s coming in and kicking some butt. It was a change election. They wanted the old guard out and wanted the new broom for a clean sweep. Now people are sitting back and saying, let’s see how this goes. Do we feel safer in the streets? How are public services? Are schools better? Is the CTA better. In time, that’s what people will want to know.”

To our readers: A look back, and ahead. With thanks for your support in our first year