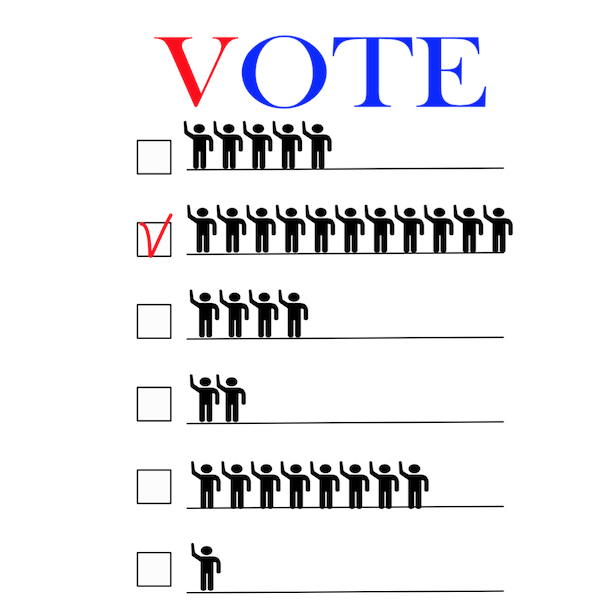 A handful of Illinois lawmakers are pushing to change the way voters pick candidates in state elections, in hope that it would provide voters more choices and boost voter turnout.

The immediate prospect for such a change happening, has been dampened by the coronavirus outbreak. But activists hope that the idea may still take hold, as people re-examine how the government, and elections in particular, operate in the wake of the pandemic.

Lawmakers in both the House and Senate have filed legislation that would introduce ranked choice voting to Illinois by using it in races for state offices, such as legislators, attorney general, treasurer and governor. The measures would not apply to federal congressional elections or i.e., presidential elections. As the proposals currently stand, they would only apply to general election contests, not primary elections.

The state of Maine, New York City, Minneapolis, Santa Fe and several other cities already use this voting method. With ranked choice voting, voters don’t pick just one candidate in a given race. Instead, they rank the candidates in the order that they prefer them. In the initial round of counting, all the first-ranked votes are counted. If no candidate’s total is an outright majority in the first round of counting, a second round of counting occurs in which all of the votes for the last-place candidate in round one are replaced by voters’ second choices. The process of eliminating the last-place candidate and redistributing votes continues until a candidate earns a majority.

The system prevents “spoiler” candidates who split the vote and allow a weaker candidate with a small plurality to win under the current system. It also eliminates the worry of many voters who think they will “waste their vote” if they pick the candidate they prefer, rather than a candidate they think is more viable.

But state Sen. Laura Murphy, a Democrat and lead sponsor of the Senate bill, said her main reason for supporting the change is to increase voter turnout.

Voters, Murphy said, “feel that the way our election system works now, it discourages people and makes them feel like their vote doesn’t matter. I would do anything to encourage participation [because] government works better when more people participate.”

Murphy’s legislation has eight cosponsors, all Democrats. Rep. Jaime Andrade, Jr., also a Democrat, introduced a similar measurein the Illinois House. Murphy said that her proposal is not likely to move forward this year, because lawmakers are limiting the topics they’re dealing with as they try to stop the spread of COVID-19.

Previous efforts by Illinois lawmakers to introduce ranked choice voting, which is often also called “instant runoff voting,” never went far. In 2002, for example, Barack Obama and John Cullerton, both Democratic senators then languishing in the legislative minority, cosponsored a billto move Illinois to ranked choice voting. But Obama never made it a major part of his agenda as his political career took him to the White House, and Cullerton did not press the matter when he became presidentof the Illinois Senate. Another Democratic senator, Daniel Biss, introduced legislationin 2017 to make the change, but Biss went on to lose a bid for governor and left the Senate.

On the other hand, Murphy said support for ranked choice voting is building. Maine adopted it in 2016. New York City voters approved the change last year. Media outlets have been increasing their coverage too. There’s been “a deliberate process to educate people about why it makes sense,” Murphy said, and that could improve the chances of Illinois lawmakers making the change.

In fact, one of the activists who brought the issue to Murphy’s attention learned about the idea through a local TV program. Patricia Lofthouse, a retired teacher and librarian in Park Ridge, saw a featureabout ranked choice voting on “Chicago Tonight,” that explained the system in light of the wide-open election for Chicago mayor.

During that feature, Sean Raju, a volunteer with the Illinois chapter of FairVote, a group that advocates for ranked choice voting, pointed out that the alternative system would have eliminated the need for a runoff election in the mayor’s race. Not only would that have saved the city money, it would have been fairer, Raju argued. Turnout often falls during runoff elections and, in Chicago’s case, the voters who did show up would likely be those who lived in wards with aldermanic runoffs as well. That would skew the runoff results, while an “instant runoff” would be based on the original ballots.

For Lofthouse, the retired librarian, the system promises other benefits, too. She liked that it would cut down the “spoiler effect,” especially when candidates or parties put sham candidates on the ballot to block would-be challengers. And because every candidate could end up needing the second-place vote of their opponents, candidates in general are “more civil” and less likely to attack each other, Lofthouse said.

Andrew Szilva, the communications chair of FairVote Illinois, said the fact that other cities and states are now using ranked choice voting addresses some of people’s biggest objections when they first learn about the system.

“There are two major myths that I encounter: that it’s too complicated so people won’t understand it… and that it’s never going to happen,” Szilva said. But now that the switch has happened in other places, and voters report that the process was easy, “it doesn’t sound like such a radical idea,” Szilva said.

Will the IL House support it?

That said, Illinois lawmakers could prove harder to convince than officials elsewhere. Szilva acknowledged that getting support for the idea could be harder in the Illinois House than in the Senate.

He wouldn’t elaborate, but it’s no secret that House Speaker Mike Madigan’s political organization has used spoiler candidates to improve the chances of his chosen candidate. Famously, the speaker’s team recruited two candidates with Hispanic last names to run in a primary field for his own re-election, because Madigan’s biggest threat came from a candidate named Jason Gonzales. Gonzales later sued Madigan for the tactic and lost.

Still, Madigan won the 2016 contest with two-thirds of the vote. If he had won that percentage of the vote under a ranked-choice system, he would have won outright on the first count. Second choices would not have mattered.

Madigan spokesman Steve Brown said he had not heard the speaker discuss ranked-choice voting specifically. Brown cautioned that new ideas like ranked-choice voting generally take time before they are put into place. “It’s something to look at, but I don’t think there’s any consensus at this point that would lead to enactment,” Brown said.

But people shouldn’t “rush to judgment” and conclude Madigan would oppose it, Brown added. Ranked-choice voting could be considered an expansion of voting opportunities. “If you look at the array of expansion for voting opportunities that are legal in Illinois, [Madigan] has supported those things,” Brown said.