Madigan may be key 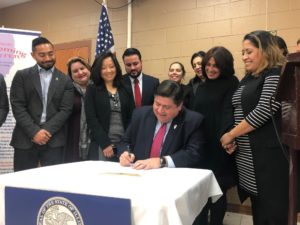 Springfield’s legislative Latino and Latinx Caucuses are hardly the most cohesive voting bloc in the state capitol’s policy and power matrix.

While the Latino Caucus includes lawmakers of non-Hispanic heritage who represent districts with significant Hispanic populations (like State Rep. Will Guzzardi of Chicago, Rep. Kathleen Willis of Northlake and Mike Zalewski of Summit), the Latinx Caucus includes only members with Hispanic lineage.
‍

The Latinx Caucus features lawmakers of Mexican and Puerto Rican heritage, representative of Chicago communities that often act as allies but also have differences that can lead to friction.
‍

Nevertheless, both caucuses and the communities they represent hold the whip hand in the redistricting battle following the 2020 census. Due to the increase in Latino population, the census is expected to produce significant gains in Latino state reps, state senators, and perhaps the biggest prize of all, a second Latino congressional district.
‍

“There is an argument to be made for a second Latino congressional seat,” said Illinois’ first Latino congressman, former Rep. Luis Gutierrez. “From a population standpoint, it’s done. But there is a geographical challenge.”
‍

First, the numbers—and they are dramatic. According to UIC figures, by 2016, Hispanics had become the largest minority group in Chicago, numbering 803,000 and making up 29.7% of the city population. That surpassed Blacks at 29.3%, with whites at 32.6%. Furthermore, figures show births have powered recent Hispanic family growth, not immigration. Meanwhile, the Black community in Chicago lost 250,000 residents from 2000 to 2016, and there’s evidence (such as school enrollment) that indicates further losses since then.
‍

Which means a second Latino congressional district should be a cinch after the 2020 census, right? Some aren’t so sure. U. S. Rep. Jesus “Chuy” Garcia worries that the census may undercount Latinos, partially as a result of scare tactics by President Trump.
‍

“All the things he did from the citizenship question he sought to put on the questionnaire, the threat to share data with homeland security, the asylum rule, children in cages, attacks on sanctuary cities and DACA have me concerned,” said Garcia. “It’s suppression, just like with African-American voters in the South. To keep numbers low, keep people in the shadows.”
‍

There’s also the politically sensitive issue of who loses if Latinos pick up a winnable district. “It’s already expected that Illinois will lose a seat and depending on the census data, the state could lose two seats,” said Garcia.
‍

With the dramatic dive in Black population, one of the three Congressional seats held by Black representatives could be at risk.
‍

“The question will then be for people like (U.S. Rep) Danny Davis because he’s gonna be in a pickle. He has a lot of Latinos in his district and Bobby Rush, too,” said Gutierrez. “It’s a zero-sum game. Bobby, Danny, give me my Latinos back. Cause I need them to create a Latino district from a geographical position and a population position.”
‍

Both Garcia and Gutierrez acknowledge the historical debt owed to civil rights leaders that led to Latino political empowerment.
‍

“I went to Congress because of Martin Luther King and the Voting Rights Act. That’s how we got those seats. Where would I be today without Harold Washington, Medgar Evers, the civil rights movement?,” said Gutierrez. “The Latino community had very clear friends, allies. There has to be a conversation so you don’t have a black vs. brown confrontation.”
‍

A further complication arises from the geographical separation of Latino community clusters. The Puerto Rican community on the Northwest Side was tortuously combined with the Mexican community on the Southwest Side to create the current curious, lobster-like shape of the 4th Congressional District seat. This area was once property of Gutierrez and is now occupied by Garcia.

“I do believe the South and Southwest Side is very strong for a Congressman. I don’t know if on the North Side, the population is concentrated in certain areas to give us that,” said Cook County Circuit Court Clerk, Iris Martinez. “I really believe we’re pretty spread out on the North Side.”
‍

Martinez, who served 20 years in the Illinois Senate, believes if a second Latino-winnable Congressional district can be created, any candidate will still have to win over a large number of non-Latinos. “In a district like mine, I had not only a population of Latinos, we had Koreans, Asians, the Polish community. We have to do a lot more work to reach outside the Latino population.”
‍

However, there was widespread agreement on the census showing potential for a big increase in Latino representation in the Illinois House and Senate.
‍

“For example, we saw the election of a Latina,  Dagmara Avelar, who lives in Bolingbrook, in a suburban district down the I-55 corridor. We’ve seen tremendous growth in the Latino community in that part of the area,” said Rep. Garcia. “We’ve also seen tremendous growth in Elgin, in Aurora and in Waukegan. That growth has come in the last 10 years so the prospects of creating more state rep or state senate districts has become enhanced.”
‍

The pandemic may also have an effect in re-positioning a Latino population on the move. “We’re going to have people who have lost their jobs, small mom and pops shops that have closed and Latinos are going to fleeing gentrification, looking for affordability, and moving further and further into the suburbs,” said Martinez.
‍

Both the legislative Black Caucus and the Latinx Caucus have announced support for the re-election of embattled House Speaker Mike Madigan, largely motivated by the same reason: the remap.
‍

If Madigan remains as speaker, he’ll draw the maps of the new legislative districts. He’s handled the task since 1980 and has more experience than anyone in the country at balancing competing political factions while serving his chief interest, retaining power.
‍

“The history for Latinos has been very good under Madigan,” said Gutierrez. “There are more state reps, and state senators, and when vacancies have occurred on the Southwest side, we’ve seen the appointment of Latinos. If you ask me, Speaker Madigan has been very good for Latinos. I think that should be a consideration. Otherwise, they say those Latinos are an ungrateful bunch!”
‍

“The reality in Illinois is that Mike Madigan comes with a tremendous amount of knowledge and experience in map making,” said Rep. Garcia. “If the Speaker is able to get reelected both the Black and Hispanic caucuses probably feel they can wield their influence and ensure the creation of district that reflect their best interests.”
‍

However, Martinez took a dimmer view of Madigan and his even-handedness with the Latino community.
‍

“Let’s be honest. Let’s be very truthful and honest out there. Right now, Speaker Madigan represents an area (on Chicago’s Southwest Side) that should belong to a Latino! Should have belonged to a Latino a long time ago,” said Martinez. “When you look at some of the areas where you have non-Latinos representing Latino majority districts, I have a problem with this.”
‍

Although he’s served as speaker for 36 of the last 38 years, Madigan is under the most pressure he’s ever encountered in his long career. ComEd has admitted to bribing Madigan associates in exchange for favorable legislation, although Madigan has not been charged and denies any wrongdoing. Several Madigan aides have also been implicated in the sexual harassment scandal that sparked the state capitol’s #MeToo movement.