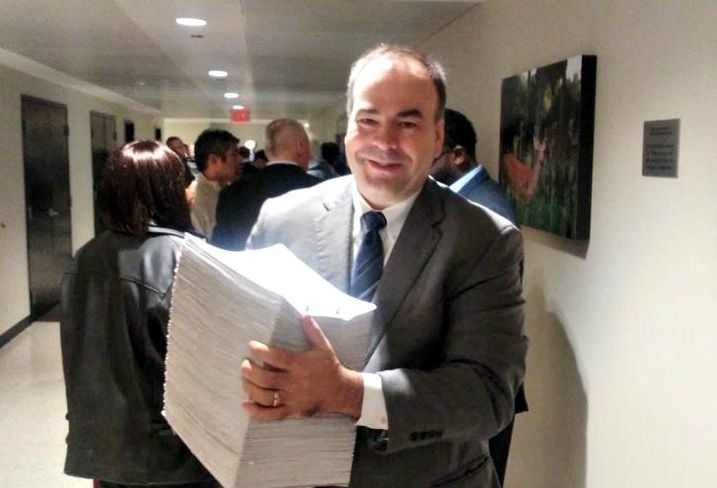 After Fritz Kaegi beat the head of the Cook County Democratic Party in a Democratic primary two years ago, he faced an even steeper challenge: revamping one of the least-understood and least-trusted government agencies in Illinois, the Cook County Assessor’s Office.

“When it comes to assessments, the public, and even many market participants don’t understand how the property tax system works,” Kaegi says. Even elected officials struggle to grasp the ins and outs, he adds. “But the interesting thing is that the public has a really good grip on what was wrong.”

Kaegi was a financial advisor in Oak Park and political newcomer when he challenged second-term Assessor Joseph Berrios in the 2018 Democratic Primary.

Berrios had been entrenched in Democratic politics for decades. He had served as a state representative, the ward committeeman from Chicago’s 31st Ward and, eventually, chair of the Cook County Democratic Party.

Like many other powerful Chicago politicians, Berrios became enmeshed with the county’s property tax system. Berrios served in various staff and elected positions that oversaw the assessment and property tax appeal process. While Berrios never became a property tax attorney like House Speaker Michael Madigan or Chicago Alderman Ed Burke, Berrios built his campaign warchest with donations from property tax law firms. Berrios also worked as a lobbyist in Springfield and got several of his relatives county jobs.

While editorial boards and good government groups slammed Berrios for various ethical issues, the former assessor also ran into trouble for the nuts-and-bolts aspects of how his office conducted its core function: determining the value of real estate properties in the county which, in turn, determines the real estate tax.

The Chicago Tribune and ProPublica Illinois investigated Berrios’ office and found that many high-value commercial and industrial properties were given the exact same values from one assessment to the next, even though properties are only evaluated every three years. “Commercial and industrial property assessments throughout Cook County were so riddled with errors that they created deep inequities, punishing small businesses while cutting a break to owners of high-value properties and helping fuel a cottage industry of politically powerful tax attorneys,” the news organizations wrote in 2017.

Kaegi rode the wave of discontent and defeated Berrios in 2018. He criticized Berrios for favoring the owners of high-priced commercial property over average homeowners. He blasted the role of machine politicians in shaping Cook County’s property tax system. And he pressed for the need for the Assessor’s Office to incorporate modern technology.

But it would be no easy task.

Kaegi’s Priority:  Bring the Office into the 21st Century

“When we first came into office in December 2018, we came up to the ninth floor where our analysts sit,” he recalled. “We saw a scene that looked like the end of Raiders of the Lost Ark, with all the boxes in a warehouse. That was your assessor’s office, occupying a whole city block, stacked high with 600 tons of paper, filed in the order they were received, with no sprinklers.”

“It was a physical representation of distrust, and people had to pay money or go through a lot of trouble to navigate the system,” he said. “We’re so glad to have come from that to a technological transformation.”

For legal reasons, the office has to hold onto the paper documents. But it has moved them to a new location with better organization and fire suppression equipment. The analysts in the assessor’s office, meanwhile, have reported fewer respiratory problems once the massive stacks of paper were relocated.

It’s a small but visible sign of the modernization Kaegi has tried to bring to the office. The agency introduced a new website, which, among other things, allows people to apply for exemptions and file appeals online. The website allows visitors to file freedom-of-information requests and to view logs of all visitors to the agency’s office. Plus, his team started using a new call center. All of that, he said, helped prepare the office for the onset of the coronavirus pandemic this spring.

But the technology upgrades are also fueling much deeper changes within the office. Kaegi is building a data science department to inform the work of the whole agency. One of its first tasks was to build a new model for how it assessed residential properties. The new system uses information about home sales and the characteristics of individual homes to provide estimates of a property’s value, something similar to the way that the real estate website Zillow cranks out estimates of a home’s worth. The assessor’s office went a step further: It shared its model with the public, so coders can replicate the assessment process on their own.

Commercial properties are a little trickier to handle, Kaegi said. That’s because there are far fewer transactions to use for comparison, and individual properties can vary significantly in the amount of income they generate. Kaegi’s office has been pushing a bill in Springfield to require commercial property owners to report income and expenses for their properties, but the abbreviated legislative session this year put those efforts on hold. Still, Kaegi’s office now allows those owners to voluntarily submit that information ahead of time. The hope is that information will lead to more accurate assessments and less need for property owners to appeal those valuations.

The Assessor’s Office calculates new property values every three years. In Kaegi’s first year in office, the agency looked at properties in the northern suburbs. This year, it is evaluating prices in Chicago. Next year, it will move to the south suburbs. Then the process will begin again. Because of the way the property tax system works, it takes about 18 months between the time a property is re-evaluated and the time that a property owner has to pay taxes based on the new value.

That said, Kaegi’s new approach is already having an effect. In June, Crain’s Chicago Business reported that residential properties in the northern suburbs saw their value increase by 1.1 percent in Kaegi’s first round of assessments. The valuation for commercial and industrial properties rose by 15.8 percent.

The new values will likely shift some of the property tax burden in the county from homeowners to commercial property owners. How much of an effect they will have, though, depends on the actions of several other government agencies. First, property owners can appeal their valuations to the Cook County Board of Review and the Illinois Property Tax Appeal Board. Then, individual local units of government – cities, school districts, counties and the like – must determine how much money they need to operate for the coming year. That levy is split up among residents based on the value of their property.

“It shouldn’t be surprising that the beneficiaries of favoritism and an unfair assessment system – that were there under the previous administration – would try to defend what they have and use any tactic to keep it in place,” Kaegi said. “I just find it takes incredible chutzpah during an epidemic where all these disparities have been laid bare, to launch a dark money front group … putting on a masquerade as if it’s representing small businesses.”

“In fact,” he added, “it’s the small businesses that have been hurt by the favoritism that we’re changing.”

Like most other governmental agencies, the assessor’s office has had to revamp its way of doing business since the Covid-19 pandemic shut down much of society in March. Kaegi said the online tools that the agency rolled out last year helped residents get what they needed while the Assessor’s Offices have been closed. Kaegi also pushed state lawmakers to allow for the automatic renewal of property tax breaks that senior citizens qualify for. That way, older residents don’t have to apply this year to get the same benefit they got last year.

But Kaegi also paused the assessments that were set to go out early this year to see whether the pandemic would affect property values. For some large commercial properties like hotels and stadiums, the effect was obvious. But huge spikes in unemployment could also affect the value of residential properties, Kaegi said.

“We knew if we didn’t do something, only people working the appeals system could bring about Covid-19 information in their appeals, whereas the larger majority of people who don’t appeal would lose out,” Kaegi explained. “We were the first jurisdiction in the United States to do this… but now there are other jurisdictions that are trying to follow us.”

Overall, Kaegi said, making the real estate assessment process in Cook County easier to understand, whether for average residents of the county or for outside investors, will ultimately help attract more real estate investors to the area.

“People a realizing more and more that the property tax assessment system in Chicago was a grotesque anomaly. It stuck out like a sore thumb,” he said. “In a globalizing real estate market where real estate is being invested in by pension funds and publicly traded companies, they don’t want to see a lot of those practices that they heard about and saw.”

And once property owners get used to a new way of doing things, Kaegi said, they won’t want to go back. “Certainly,” he said, “we don’t see any support for an alternative.”

Illinois 50 Years Later: Is it Time to Give Up the Flat Tax?

Time for an Ethics Overhaul