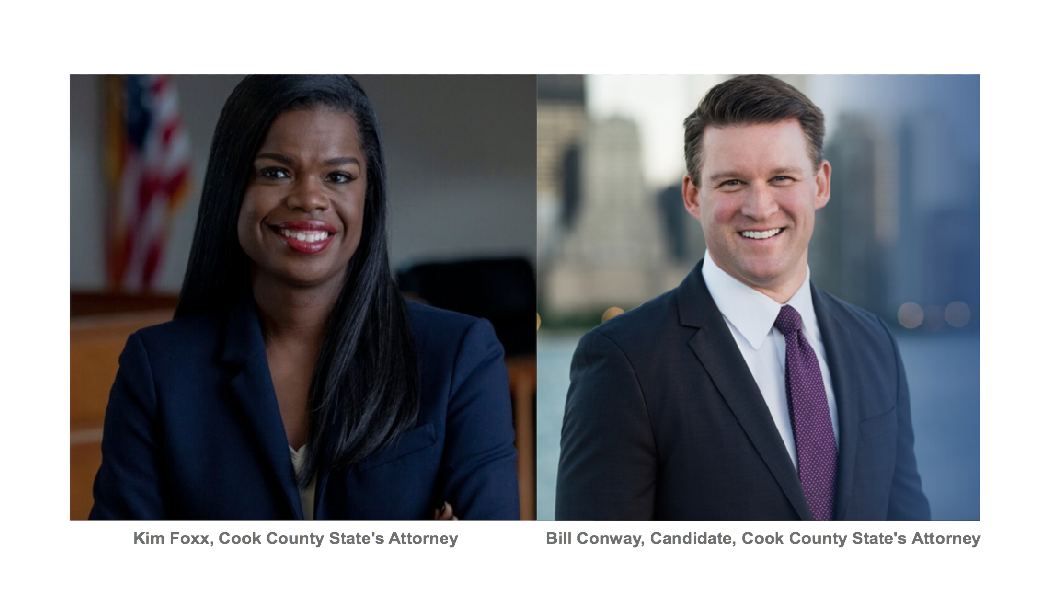 The Democratic Primary election for Cook County State’s Attorney is emerging as a high-stakes battle over the shape of social justice reform and celebrity influence in law enforcement, all of it tinged with racial overtones.

And adding to the uncertainty of the outcome, a billionaire father of a key challenger, who is pouring  millions into his son’s campaign, giving the newcomer a real shot.

In most political contests, it’s the incumbent who has a natural fund-raising advantage. But in this current race, challenger Bill Conway has outraised incumbent Kim Foxx by a margin of more than 4-to-1. For which Conway must surely be saying: “Thanks, Dad!”

Conway’s billionaire father, William Conway Jr., founded the Carlyle Group private equity firm. So far, he’s donated a whopping $4,850,000 to his son, according to the Center on Illinois Politics campaign funding tracker (for more data on candidates’ contributions and expenditures, visit our Campaign Cash page). That’s 88 per cent of the $5,507, 361 that Conway has raised as of December 31, 2019.

Conway, a 41-year-old Navy veteran and former local prosecutor, is clean-cut, handsome, personable, and has the benefit of an undeniable asset in any Chicago political showdown: an Irish surname.

Still, for all those attributes, without his Dad’s deep pockets Conway would have little or no campaign at all. At least, not a viable one.

In fact, without his father’s largesse, Conway would be trailing Foxx in the current fundraising race by a margin of more than 2-to-1.

Foxx, 48, the first black woman to serve as Cook County State’s Attorney, has received contributions totaling  $4,751,281.65 since she first ran for State’s Attorney in 2015.  Her biggest individual contributor has been multi-millionaire Fred Eychaner, a longtime Democratic donor who has personally contributed $1,011,000 to Friends for Foxx since 2016. Eychaner, an LGBTQ rights activist, is also chairman of Newsweb Corp. (Full disclosure: I have served occasionally as a substitute host at one of Newsweb’s properties, WCPT Radio).

Just behind is investment manager Michael Sacks, a close adviser to former Mayor Rahm Emanuel, who has given $312,250 to Foxx since 2017.

Foxx has also received significant funding from Chicago’s labor unions, including more than $600,000 from various divisions of the Service Employees International Union (SEIU) and $22,500 from United Food and Commercial Workers.

Foxx recently rankled Chicago’s Fraternal Order of Police and suburban police chiefs with policies that they say have weakened law enforcement, including an unwillingness to prosecute shoplifting as a felony for stealing less than $1,000 in goods.

As part of her criminal justice reform iniatitive, Foxx has also championed lowering or eliminating bonds for non-violent offenses to avoiding locking up suspects simply because they’re poor.

But it was her recent handling of the prosecution of “Empire” TV star Jussie Smollett that resulted in a flood of criticism from the law enforcement community and beyond.

Smollett allegedly faked a racist and anti-gay attack on himself that led Chicago police on a lengthy wild goose chase for his assailants.

Foxx hit Smollett with 16 felony counts of filing a false police report, but weeks later abruptly dropped the charges. Smollett was released after he agreed to forfeit his $10,000 bond and perform community service.

Foxx claimed Smollett was treated no differently than others facing similar charges. But former Mayor Rahm Emanuel called it “a whitewash of justice”. And former Police Supt. Eddie Johnson said Smollett owed Chicago and its police officers an apology.

Without the Smollett flop, Foxx would likely be cruising to victory and might have kept Conway and his torrent of campaign cash on the sidelines.

Now, by most accounts she faces a tough fight against an opponent with the keys to a vault bulging with what seems to be unlimited cash.

Illinois Democrats once directed heavy criticism toward wealthy candidates who could pour millions into their own campaigns. They championed campaign finance reform to keep big money out of politics.

But that was before billionaire Democrat JB Pritzker spent a mind-blowing $171 million of his own money to win the 2018 election for governor.

Now Foxx supporters can’t directly criticize how much money Conway is spending without looking like hypocrites in the party Pritzker leads. So instead, they’re quietly taking aim at how Conway’s father made his fortune.

The Carlyle Group, which officially says it controls $212 billion in assets, has long and deep ties with both the munitions industry and Republican power brokers.

Until the late 1990’s, Carlyle controlled United Defense Industries, a company which the Group itself says was a leading manufacturer of “combat vehicles, artillery, naval guns, missile launchers, and precision munitions.” Its most famous product was the Bradley Fighting Vehicle. Carlyle cashed out of many weapons industries after 9/11, when the value of defense assets soared.

Also associated with Carlyle, is a long list of GOP officials, including President George H.W. Bush, who was a high-profile investor and “ambassador” for the company after he left the White House. Former Secretary of State James Baker and former Defense Secretary Frank Carlucci were closely tied to the firm as well.

As the campaign progresses, expect allies of Kim Foxx to question whether the Conway family’s connections to the weapons industry are appropriate for a prosecutor seeking to curb gun violence. The Foxx campaign also may wonder out loud whether Conway is a Democrat at all, given those family connections to Republican bigwigs.

Still, Carlyle is so big it’s got links to dozens of industries. The company once controlled the Dr. Pepper/7-Up Company, and invested in Nielsen, Hertz, Dunkin’ Donuts, and even in a 175-unit housing complex in Evanston.

A further look at the donors’ lists from both candidates shows a host of prominent individuals who are choosing up sides.

In Conway’s corner there is a long list of heavyweight donors from both the corporate world and the legal community, including superstar personal injury attorney Robert Clifford; real estate mogul Sam Zell; billionaire industrialist Lester Crown and his wife Renee; banker and former CPS school board president David Vitale; and former Gov. James Thompson and his wife, Jayne.

Foxx also carries the endorsement of the Cook County Democratic Party into the primary battle, backing won with the assistance of her mentor, County Board President Toni Preckwinkle, who is also party chairman.

Two other candidates are also seeking the Democratic nod to be the county’s top prosecutor.

Donna More, a former assistant federal and county prosecutor, ran unsuccessfully in 2016 and is making another try. And Ald. Robert Fioretti, who’s become something of a perennial candidate for a variety of offices, is now also making a bid for Cook County State's Attorney.

Neither is seen as having enough support from voters or financial donors to pose a serious threat to Foxx.

A source close to the Foxx campaign conceded Conway’s spending is beginning to pay off.

Then again, if Foxx is best-known by some voters simply for the Smollett case, that’s clearly more of a burden than an advantage.

This time around, Foxx is aiming at raising $4 to $5 million. To have a good shot, and overcome the advantage of incumbency, some believe Conway may need to raise $10 million. If so, he certainly can find it right in the family.

All of which shows that like Illinois taxes, the cost of campaigning here goes only in one direction: up - which makes it tougher in each election cycle for challengers to break through without big money backing, or a powerful patron within their party.

Looking Back: The Fight for Illinois Statehood and the Debate Over Slavey in 1818

Illinois’ Path to Phase IV of COVID-19: Have we met our goals?