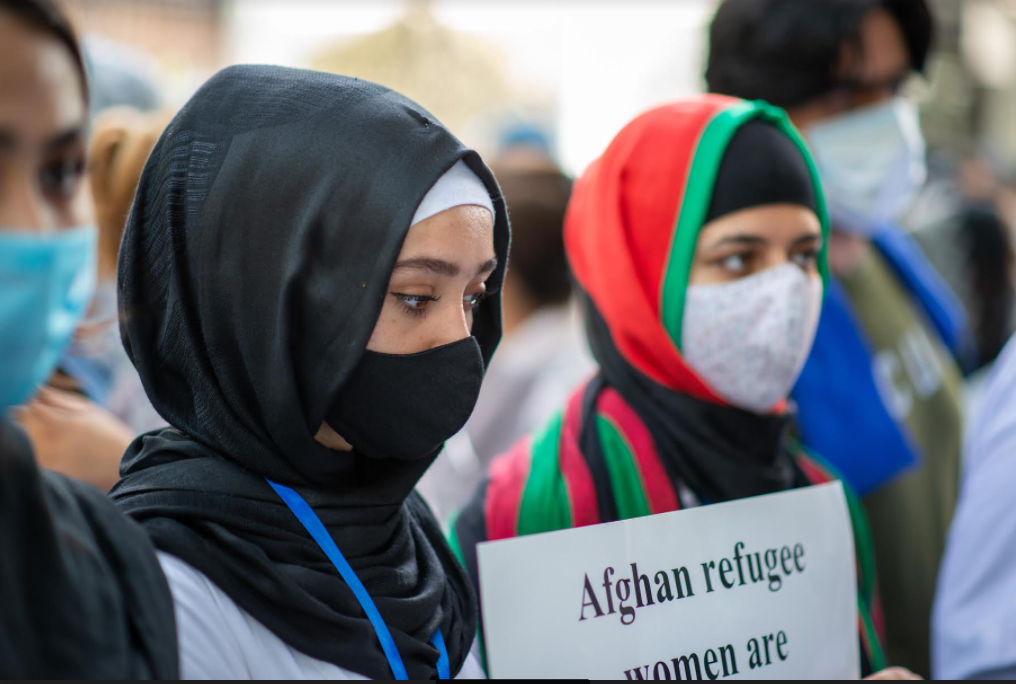 As U.S. forces left Afghanistan last month, Gov. JB Pritzker said the state would welcome Afghan evacuees who wanted to come to Illinois. Now his administration is trying to figure out the best way to support them.

According to the administration, resettlement agencies in Illinois told the federal government they could take in as many as 770 people coming from Afghanistan in the coming months, but that number could climb as high as 3,000 if more money and resources could be found to support the relocation efforts.

Normally that money would come from the federal government. Indeed, advocates and state officials still hope the Biden administration or Congress will be able to step in to help with the transition.

But that process could take months, so, in the meantime, Illinois officials are examining whether the state can offer health insurance and other benefits to the many Afghan evacuees who do not qualify for traditional refugee programs.

“We have a responsibility and commitment, as the human service provider in Illinois, to step in with our partners to fill as many gaps in basic human needs that exist,” said Lilian Jiménez, the associate director of the Illinois Department of Human Services, who oversees the Office of Welcoming Centers for Refugee and Immigrant Services.

The biggest gap is for a group of newcomers called “humanitarian parolees.” The designation is for people seeking to enter the country during an emergency, who would not otherwise be eligible to come. The federal government has used the designation in previous decades to help evacuees from Cuba and Haiti come during crises.

Advocates anticipate that Afghans who come to the U.S. under humanitarian parole will eventually either apply for asylum (a process that can take years) or to get blanket relief from Congress, as Cubans fleeing the Castro regime did.

The newcomers from Afghanistan are not likely to be 'refugees', at least from a legal standpoint. To qualify as a refugee under international law, a person must leave their home country and apply for refugee status with the United Nations from a separate country. The UN then assigns the refugee a new country to relocate to. However, most Afghans did not leave Afghanistan for a second country before coming to the United States.


One of the top priorities for the Pritzker administration is to find a way to get health insurance to Afghan newcomers who wouldn't otherwise qualify for Medicaid.

“For individuals coming to Illinois, not having medical coverage during a pandemic is extremely challenging and difficult. Under the leadership and direction of the governor, we are planning and problem-solving…to ensure that Afghan refugees can access essential services,” Jiménez said.

She said her agency is also working with the state departments of Public Health, Emergency Management, Healthcare and Family Services, and others.

The administration is also looking for ways to give resettlement agencies more money for case management.

But almost everything surrounding the relocation efforts is in flux now.

The United States airlifted roughly 120,000 people from Afghanistan in recent weeks, and about a third of those people have made it to the U.S. so far, according to U.S. Homeland Security Secretary Alejandro Mayorkas.

That total includes American citizens and Afghan evacuees. Many of the Afghan evacuees have Special Immigrant Visas (SIVs) for translators and other people who worked with the U.S. armed forces in Afghanistan.

People who received Special Immigrant Visas qualify for public benefits. In fact, they qualify for permanent resident status (a green card) almost as soon as they arrive in the United States. They have usually been able to choose where in the United States they want to relocate to, and their top destinations have been Sacramento and northern California, along with the Washington, D.C., metro area.

If that practice continues, it’s unlikely that many of them will come directly to Illinois.

That means that many of the people who do come to the state would not initially be eligible for many public benefits.

Jims Porter, the communications and advocacy manager at Refugee One, Chicago’s largest refugee resettlement agency, said Refugee One will offer humanitarian parolees from Afghanistan the same assistance it offers other refugees. That includes getting them a furnished apartment, providing mental health services, helping them learn English and connecting them to jobs.

“It’s wrong to usher people into a life of poverty and homelessness. That’s what these people will fall victim to if we don’t have the proper supports in place,” he said. “So we will offer these people every service that we offer all of our other clients, because it’s important to do it, but we’re not going to receive funding to do it.”

Without federal funding for the humanitarian parolees, Refugee One will have to rely more heavily on contributions from individuals, nonprofits, churches, corporations and maybe even state governments.

But it is a new financial burden for resettlement agencies that have already faced lean budgets over the last five years.

The Trump administration put even more stress on the resettlement agencies, when it drastically cut the United States’ annual intake of refugees allowed in the country. It cut the yearly allowance from 85,000 during the last year of the Obama administration to 18,000 last year.

The pandemic has made things even worse. The Biden administration raised the total number of refugees allowed in the current federal fiscal year (which ends at the end of September) to 62,500. But experts expect that fewer than 10,000 will be admitted by the time the fiscal year is over.

That means the same resettlement agencies that will help relocate people from Afghanistan have gone through years of budget cuts. They have laid off hard-to-replace staff, who know the ins-and-outs of refugee programs and often are native speakers of languages that refugees speak.

World Relief, a nationwide resettlement agency, for example, has closed seven of its offices and stopped offering resettlement programs in other locations, said Matt Soerenson, the U.S. director of church mobilization and advocacy for World Relief. The organization still has about 16 offices open around the country, including three in the Chicago area and one in Moline.

Staffing up won’t be easy, he said. “It’s not just a switch that you can flip on,” he said.

Soerenson is hopeful that Congress will agree soon to help resettlement agencies with the cost of moving Afghan evacuees into new homes in the United States. The idea has bipartisan support in Congress, although it’s not clear how or when those changes could be taken up.

In the meantime, the general public has offered its support for those efforts, by giving money, donating furniture and volunteering, he said.

“We had 12 times more first-time donors in the month of August 2021, than in the previous in August 2020,” Soerenson noted. “That said, it might not be enough.”