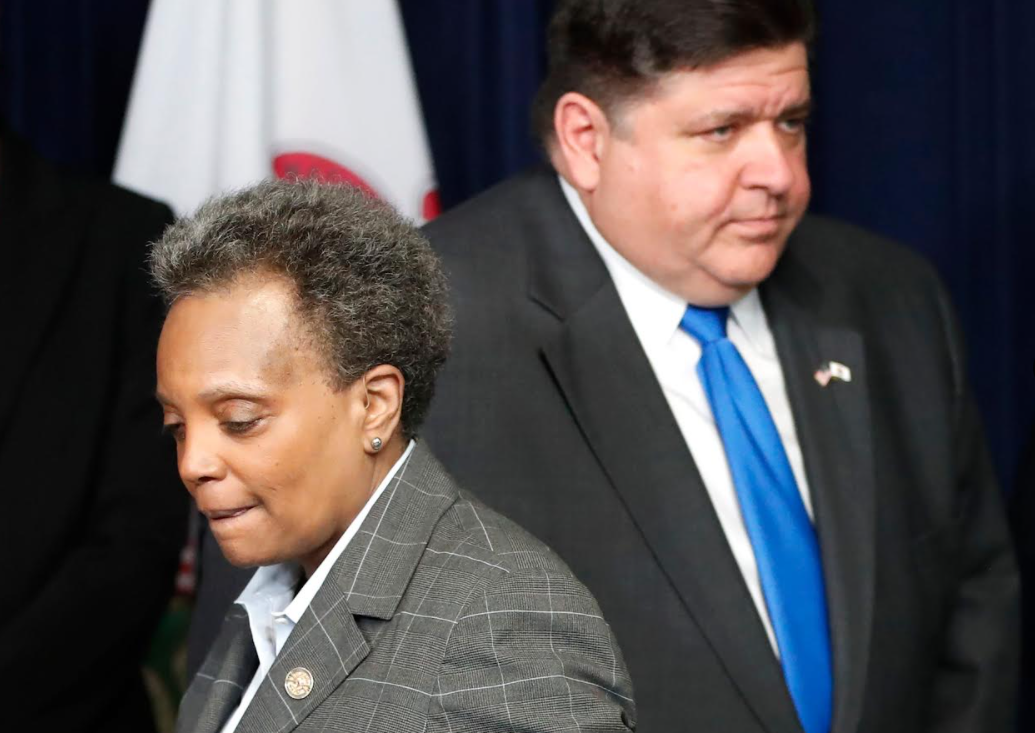 
The new Illinois governor, a self-styled billionaire progressive who bought the state’s chief executive post off the bargain rack to win his first-ever elected office.


The new Chicago mayor, a brainy and highly successful corporate attorney, also progressive, who surprisingly emerged from a crowded primary to win the post of Chicago’s CEO in a landslide general election to cap her first political candidacy.


And both are Democrats.


But Illinois Gov. J.B. Pritzker and Chicago Mayor Lori Lightfoot haven’t always been on the same page when it comes to Lightfoot’s wants and Pritzker’s willingness or ability to deliver.


Most recently, the two tangled on and off over Covid 19 restrictions. Lightfoot wanted rules eased for indoor dining far earlier than Pritzker so Chicago’s restaurants could begin to recover from shutdowns. But Pritzker refused to bend on his previously announced metrics.


Earlier, Lightfoot went to Springfield seeking a hike in real estate transfer taxes on high-priced homes and a reworking of the state’s gambling expansion law to enable lower taxes and more profit from a potential Chicago casino. She initially struck out, while Pritzker watched from the sidelines.


Why the lack of love?

“You’ve got two alpha-level politicians, chief executives in control of overlapping jurisdictions and that’s going to have an inherent conflict in some sense. Even if it’s just political,” said Chris Mooney, an expert on state politics who teaches at the University of Illinois at Chicago.

“They have different perspectives. The state has a different set of interests than the city does so there’s going to be that conflict. And then you have the personal conflict of who’s on top. Especially in a place like Illinois, politics isn’t about ideology. It’s about clout. It’s about jobs. It’s about power.”


“The mayor has to do everything she can for the city and often that means getting money from the state. The state wants to help its cities but it can’t help one city over others. And there’s a limit to money,” said Edgar. “No matter who the governor is, no matter who the mayor is, it’s an ongoing friction. There are times you have to say no and if you’re the mayor, you don’t like to have the governor tell you no.”


Chicago, like Illinois’ other cities, is highly dependent on state revenues to fund its general budget as well as education and transportation.


However, Chicago also produces more state tax dollars than any other Illinois city by far.


“A fallacy often floated downstate is that Chicago’s just a leech sucking up all the downstate money. The Chicagoland area is the primary revenue generator for the state. The generator of jobs and the generator of income,” said Mooney. “Where the economic activity occurs is in the urban areas. Not the rural areas.”

Maverick Democrat Pat Quinn, who served as governor from 2009 to 2015, was elevated from lieutenant governor following the impeachment of Gov. Rod Blagojevich. He dealt with Chicago Mayors Richard M. Daley and Rahm Emanuel. His experiences with the two were very different.


“Completely different. One, Rich Daley, was easy to work with,” said Quinn. “The other, Emanuel, was not. Very difficult.”


“That’s one where he put votes on the board,” Quinn said. “He put out the word that Democrats should vote for the bill. I can’t think of one thing he did to undercut me.”


Quinn had known Emanuel since 1980 but the initial meeting between Quinn as governor and Emanuel as mayor got off to a rocky start.


“I invited him to the governor’s office. He was name dropping and all that. Talking about experiences in Washington,” said Quinn. “But then he started swearing at my budget director, Jerry Stermer, with other top staff in the room. I thought that was way out of line. I told him to stop it. He was highly disrespectful. He certainly never suffered from modesty.”


In Springfield, Emanuel chose to work around Quinn rather than work with him. Often, Emanuel would run his legislative agenda through Senate president John Cullerton, a close friend.


In 2014, said Quinn, “Cullerton was having breakfast at the Governor’s Mansion in Springfield and said, 'I’m going to run a bill this week raising property taxes for Chicago. The state legislature will vote for it. It will be veto proof whether you like it or not. I’ve run it by Madigan, too. It’s going to be the law.'”


Quinn hardly wanted to raise Chicago property taxes in 2014 when he was running for re-election. “That was on a Monday. By the end of the week, the whole plan had fallen apart. That was typical of Rahm and Cullerton to try to bypass my administration. But it generally wasn’t a successful proposal. It’s a big state. I had more friends in the legislature than he did, especially as time went on,” said Quinn.


The two also clashed on a bill for a Chicago casino. “I said I’m not against it but the bill you’re running has loopholes for mobsters. And Rahm hated that, he told me, 'you can’t ever say that again'. It was a bad bill. I didn’t think gambling interests should be able to contribute to political campaigns. And Chicago can’t regulate itself when it comes to gambling. You need the Illinois Gaming Board, a third party keeping an eye on things.”


“I didn’t have a big problem with Rich Daley. I think he had more of a problem with me,” said Edgar. “Richie had been mayor about two years when I came in. That’s when they increased the income tax, giving an additional amount to the cities. So he got a big boost there. They did Navy Pier, too. All  this happened as Jim Thompson was going out the door. When I came in, we were in the midst of a recession, and we had a huge deficit. I had to cut a lot of things, which means I had to say no. He always referred to me as ‘Governor No.’”


Daley and Edgar had other flash points as well. Daley wanted the state to pay for a Soldier Field rehab for the Bears but Edgar refused, preferring a multi-purpose facility at McCormick Place. Daley wanted to close Meigs Field (which he eventually did after Edgar left office) but Edgar fought to keep it open. After the infamous Loop flood, Daley wanted Edgar to promise to pay half the repair costs. Not knowing what the costs were and unwilling to sign a blank check with the state practically broke, Edgar refused. And Daley wanted Edgar to sign off on a bill rushed through the statehouse limiting the power of rebellious City Treasurer Miriam Santos. Edgar again declined.


“Daley told me, I really need you to sign this bill,” Edgar said. “I said, Mayor, I got all the Hispanic leaders leaning on me. They feel like this bill is an attack against them. I got half the Hispanic votes in a close election. I felt pretty close to the Hispanic community. I vetoed the bill. He thought it was a personal slap. From then on, things were pretty tense.”


As partisan as politics are, both Edgar and Mooney agreed that the personalities matter more in the relationship between an Illinois governor and a Chicago mayor.


When it comes to the relationship between Pritzker and Lightfoot, the fact that both are rookies in elective office also has an impact on how they work together.


“They don’t have the long history of association that sometimes you get. Politicians that have come up through the ranks and have known each other,” said Mooney. “Rich Daley was in the state house for his dad, he met a lot of these people. Pritzker never served in a public position in his life. Lightfoot’s never been elected to anything. That’s part of it. They’re both trying to figure out what they’re doing. Part of it is negotiating that relationship with one another. Part of it is trying to figure out how to run this huge organization I’m suddenly in charge of with an unprecedented pandemic on top of us. They’ve got to deal with each other. To be successful, they’ve got to get each other’s help.”


As political parties have weakened and the Chicago machine has all but disappeared, so has the relationship changed between Chicago mayors and Illinois governors.


Quinn’s dislike of former Mayor Rahm Emanuel partly stems from the suspicion that he got less than fervent support from Emanuel in the election he lost to Republican Bruce Rauner.


“He had been buddy-buddy with Rauner and he was pretty tight with Rauner when Rauner was running against me. He didn’t give me the kind of all-out support in Chicago that Rich Daley had given candidates for statewide office. Or Harold Washington. You always had to look over your shoulder.”


“Mayors and governors of the same party aren’t always on the same page,” said Edgar. “And I think we will see that more and more often. I think that will continue just because you don’t have a political boss who can say, 'OK, this is what we’re going to do, everybody.' That doesn’t exist anymore. That day is gone.”