Illinois' Congressional Delegation Responds to Violence at the Capitol 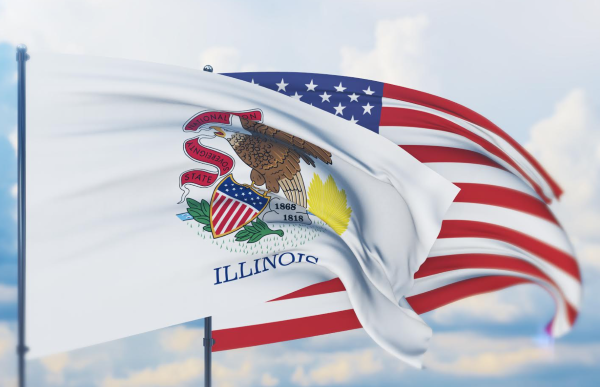 Amidst nationwide chaos following Wednesday's violent riots and subsequent breach of the Capitol, Illinois' leaders are rushing to connect with constituents and assuage their fears. Here are some of their statements:

“This is a special place. This is a sacred place. This sacred place was desecrated by a mob today on our watch. This temple to democracy was was defiled by thugs, who roamed the halls – sat in this chair, Mr. Vice President – one that you vacated at 2:15 this afternoon,” Durbin said.

“The mob was invited to come to Washington on this day by this president for one reason – because he knew the Electoral College vote was going to be counted this day,” Durbin said. “This mob was inspired by a president who cannot accept defeat.”

“This president begs, he coaxes, he even threatens that secretary of state to find the votes he needs,” Durbin said. “In any other venue, that would be an obvious crime.” “President Trump incited his followers to violence. They stormed the Capitol and stopped the House and Senate in session. We do not know at this point the extent of the damage or injuries they have caused,” he tweeted. “This shameful chapter in our nation’s history is the real legacy of Donald Trump. On January 20, we can begin the process of healing the wounds of this country and start to put this national nightmare behind us.”

“What we saw today was not a protest, it was an attempted coup. I refuse to let anyone intent on instigating chaos or inciting violence deter me from carrying out my Constitutional duties. Congress must continue its work certifying the results of the election and turn the page on this shameful chapter in our history. It is the only way to inch closer to healing our nation.”

“I wanted to let everyone know that I'm safe. Americans cherish our right to free speech & peaceful protest. But what’s happening in our nation’s capital is not just unacceptable, it’s un-American. Please pray for peace & the safety of our brave law enforcement & 1st responders.”

"The rioting and violence I saw and heard at the Capitol today brought back painful memories of the Congressional baseball shooting in Virginia a few short years ago. Political violence of any kind is never acceptable and must be prosecuted to the fullest extent of the law. There’s no excuse for what we saw today. It’s unpatriotic and un-American. Political leaders, from Congress to the White House, have an obligation to be voices of reason and calming in times of national crisis. That time is now," he said.

No official statement, but has been broadly criticized for her remarks in a speech on the day of the riots.

“Yesterday was a sad day, as we all know. It was the day where fire stoked by the president and other leaders finally leapt out of the pit, and it lit the trees. Thankfully, the strength of our Constitution and democracy held, and we emerged today a little battered but resolved. What happened yesterday is a wake up call to many, but a call to accountability for others. In the past few presidencies, the administrations have been so concerned about even a moment of weakness, that the 25th amendment was invoked during minor surgeries. Passing the duties to the vice president while the president was under anesthesia, because even for that moment to have the captain of the ship absent could cause major catastrophe. "Sadly, yesterday it became evident that not only has the president abdicated his duty to protect the American people and the people's House, he invoked and inflamed passions that only gave fuel to the insurrection that we saw here. When pressed to move and denounce the violence, he barely did so, while of course, victimizing himself and seeming to give a wink and a nod to those doing it. "All indications are that the president has become unmoored, not just from his duty, or even his own, but from reality itself. It is for this reason that I call for the vice president and members of the cabinet to ensure the next few weeks are safe for the American people, and that we have a sane captain of the ship. Section 4 of the 25th amendment allows a majority of the cabinet and the vice president to assume the duties of the office of the presidency until the president is able to himself. It's time to invoke the 25th Amendment and to end this nightmare. "We will arise from this, but we cannot forget what led us here: the liars and conspiracy authors are already at it again this morning with false narratives about yesterday's disaster. Here's the truth: the president caused this. The president is unfit. And the president is unwell, and the president must now relinquish control of the Executive Branch—voluntarily or involuntary.”

"This afternoon, I was in the United States Capitol as rioters broke into the building. I can report that my staff and I are thankfully safe and secure. I want to thank the law enforcement officials who acted to keep individuals in and around the U.S. Capitol safe.

"What happened today was one of the most shameful things I have seen. It is a terrible day for our country and democracy. The actions taken by rioters go against everything that we stand for as Americans. The rioting and violence must stop. We are a nation of law and order, and those who are responsible for the actions and violence today must be held accountable to the fullest extent of the law. As Americans, we are much better than this."

“Today’s actions are nothing short of a murderous insurrection and armed coup incited by Donald Trump and executed by his diehard supporters.  These actions are an attack on the U.S. Constitution, our democratic institutions, and the United States, as a country.  This sort of behavior is repugnant to our democracy, pure and simple.

“What we witnessed today was an assault on our democracy. But let’s be clear — violent mobs attacking and desecrating our Capitol was not the most disgraceful or frightening part of January 6. It was the shameful sight of a failed president inciting those mobs in a pathetic attempt to overthrow our government as his last desperate attempt to cling to power. The time has come to look deep within our collective psyche to determine how a man willing to destroy our nation was enabled for so long. Donald Trump sought to carry this nation to the brink. But he failed. Our democracy still stands strong. Now it’s our responsibility as citizens to help fulfill the promise of America and create a government that works for all the people.”

“Even a day later, I remain in disbelief from the events that took place yesterday. The United States Capitol was broken into, vandalized, desecrated and forced into lockdown due to violent, vicious domestic terrorists who did not want this nation to uphold the will of the voters.”

“Donald Trump encouraged a violent assault on the US Capitol to prevent Congress from exercising our constitutional duties. I voted to impeach Trump once before, and I would do it again. He should be removed immediately.”

“Make no mistake: President Trump and his enablers are personally responsible for inciting this violence and he must immediately and unequivocally condemn it and urge his followers to stand down.”


“The cabinet must invoke the 25th amendment. This is the most efficient, urgent step we can take to remove Donald Trump from office.”

“Yesterday’s attempted coup incited by our 45th president, Donald J. Trump, will go down as one of the darkest moments in our nation’s history.

“In America, safe, secure, fair elections are the cornerstone of our democracy. Yet for weeks, the President and his allies in Congress knowingly peddled disinformation and refused to accept the results of a legitimate election—even after 61 defeats in court. We must not only stand up to this treasonous President and his insurrectionist mob, but to the elected officials who helped incite yesterday’s violence and see them stripped of their power to continue their assault on our democracy.

“I wish I could say that I was totally surprised by the events at the Capitol today but in truth we have been heading inexorably to this moment for the past five years.  This a shameful moment in our history, but we have come too far as a people, we have achieved too much, we have overcome too much to go back."

“I support the immediate removal of Donald J. Trump from the office of President of the United States by impeachment and/or via the 25th Amendment.”

“The events that occurred yesterday around the United States Capitol were nothing short of insurrection. President Trump directly instigated  these violent acts, and whether he is unwell or simply unfit, he has demonstrated he lacks the capacity to execute the duties of his office. If the President will not step down immediately, he must be removed from office by the Vice President and Cabinet through the invocation of the 25th Amendment.”

“We WILL hold President Trump and his enablers in Congress responsible for the domestic terrorism that unfolded at the Capitol today. We WILL strengthen and protect our democracy and show that hatred, authoritarianism, and fascism have no place in the United States of America.”

“Today, from the House Chamber, I experienced the unthinkable for our democracy, as the Capitol was attacked by a radical mob who would deny a free and fair American election. Today, America witnessed a mob, not of patriots, but rather rioters, looters, and domestic terrorists motivated by the incitement of the President of the United States, Donald Trump."

“President Trump’s actions since the election, including fomenting the violent insurrection at the Capitol yesterday, have only made the case for removing him from office stronger. I voted to impeach the President before, and I would do so again.”

“Today's violent, treasonous attack on the United States Congress was incited by the President of the United States. By his own admission, he sought to overturn an election and the will of the American people. Our democracy is at stake and we cannot wait until Inauguration Day to see him removed from office—it must be immediate.”

“I have always been fiercely patriotic and proud to uphold our American values. Our nation has never cowered to terrorists or bowed down to tyrants. We have never allowed ourselves to be intimidated by those who would use the force of violence over lawful action. And under my watch, today will be no exception.


“This evening, democracy will prevail. Congress will make sure that every American’s vote counts —without interference by politicians who have put their party over the people.”