How Michael Madigan Maintains His Grip on Power 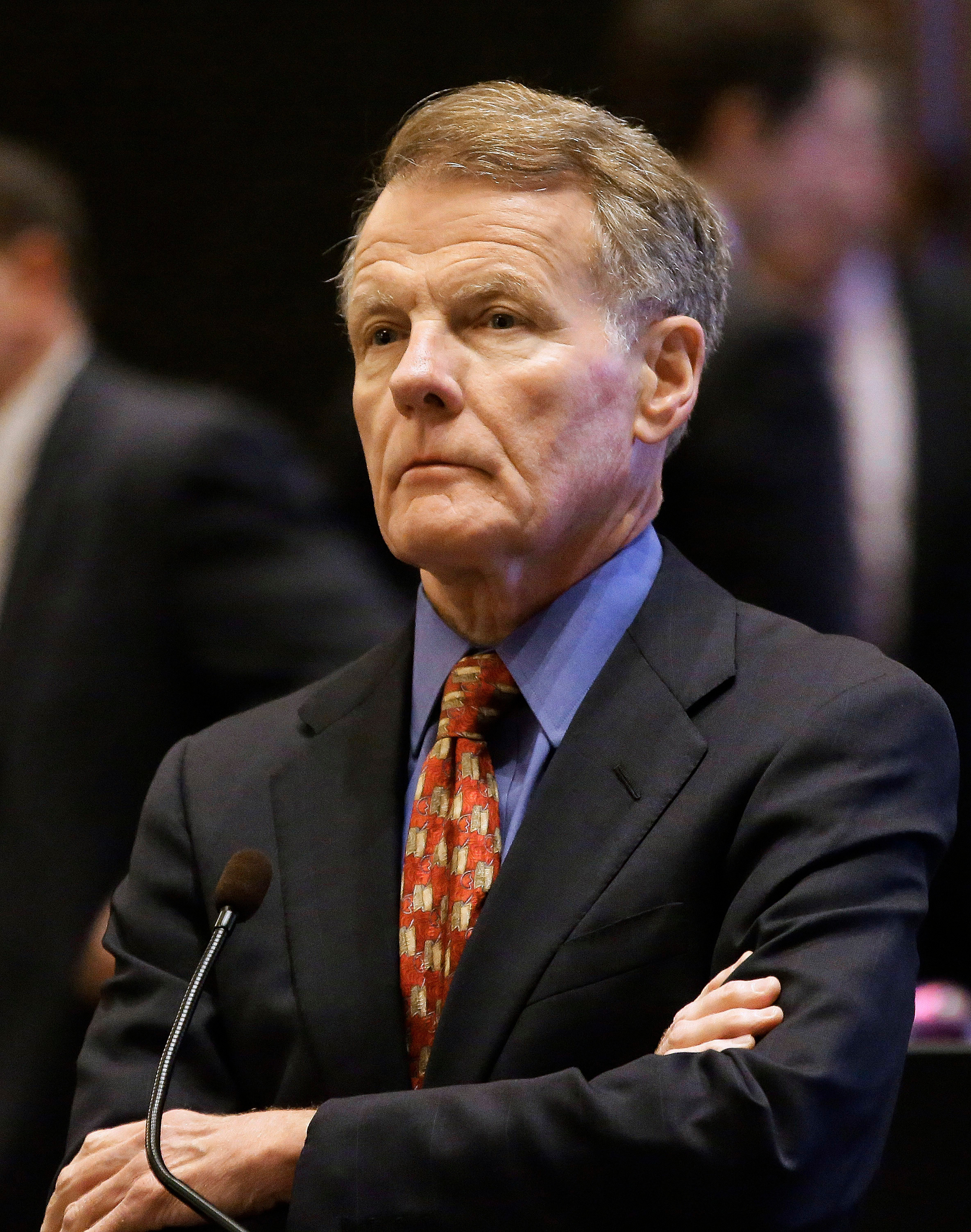 It’s nearly impossible to imagine Springfield without Michael Madigan: He is a man who knows how to hold on to power. First elected to the House of Representatives in 1971, he is the chamber’s longest-serving member and has controlled the House as speaker for all but two years since 1983. He widened his grip on state politics in 1998 when he became chair of the Illinois Democratic Party. Madigan is currently the only legislative leader in the country to also lead a state party.

But now an ongoing federal corruption probe involving ComEd executives, Madigan and others threatens his decades-long reign. Madigan has not been charged with a crime and denies all wrongdoing. But once-unthinkable cracks of opposition have emerged among his Democratic colleagues, including state legislators, some of whom have called for him to step down from his leadership positions. He has said he has no plans to resign and will stand for re-election to the speakership in January—although a potential federal indictment would likely scramble that plan.


And one of his House Democrats, Stephanie Kifowit, made history Thursday when she officially announced that she will be challenging Madigan for Speaker. A few years ago this type of move would have been unthinkable.

Here’s an overview of how the representative from the 22nd District—who’s running unopposed for re-election next month—maintains his grip on the state’s political edifice.

When election time rolls around, cash from these funds is distributed to allies in contentious elections, as well as to new challengers in need of financial backing. There are strings attached, of course: If elected, recipients are expected to fall into line with Madigan and the party apparatus he controls.

But the resources Madigan can potentially tap—whether for Democratic campaigns or his own legal bills—go beyond these four funds. As CapitolFax reported last year, the Speaker and his allies employ a strategy known as “parking,” which effectively allows campaign contribution caps to be skirted. Contributions directed to an ally’s campaign account will sit there unused until Madigan requires them to write a check for another candidate or to the Democratic Party itself. This allows large amounts of funds to be redistributed as needed without breaching contribution caps or having the Speaker’s name directly attached to them.

For example, as the Chicago Sun-Times reported, seven lawmakers (6 House members and 1 Chicago Alderman) donated a total of $751,400 to the Friends of Michael J Madigan Committee and the 13th Ward Democratic Organization over the course of a few weeks last year. The newspaper speculated that these funds were conveniently transferred to candidates or to help cover the Speaker’s mounting legal bills.

Doling out government jobs or exerting influence beyond the public sector to secure positions for allies is a tried-and-true part of Speaker Madigan’s power playbook. A 2014 Chicago Tribune investigation showed that more than 400 government workers had “strong political ties” to Madigan. These positions were held at all levels, from the bottom of the food chain to the very top.

“Helping people find jobs is not a crime,” Madigan wrote in a letter sent last week to members of a special committee now investigating his ties to the ComEd bribery scheme. (Madigan declined to testify before the committee.)

Other examples of patronage include:

When ComEd executives questioned how they would explain the decisions internally, they were allegedly told to say: “We had to hire these guys because Madigan came to us. It’s that simple,” according to federal subpoena documents. When another ComEd executive complained about the large sums they were ordered to pay in billable hours to a Madigan-connected law firm, they were chastised: “I know the drill, and so do you.”

Unchallenged in His House District

In 2018, polls revealed that only 21% of Illinois voters approved of the House Speaker, while 68% disapproved. But Madigan only answers to voters in the 22nd House district, on Chicago’s Southwest side, where he’s had no problem maintaining his seat since 1971.

The 22nd district is a tiny district near Midway airport. Madigan typically faces no opposition. During the last five election cycles, he’s received less than 22,000 votes on average to be re-elected. Madigan runs a tight ship, keeping volunteers pounding the pavement in every precinct of his district. As reported by ProPublica, Madigan's 13th Ward Democratic Organization issues "sample ballots" of the candidates they endorse (including Madigan) to voters. (The 13th Ward comprises a significant portion of the 22nd District.) Power is consolidated, preventing pesky challengers. It’s a well-oiled political machine that is likely to keep operating smoothly for years to come.

All Power to the Speaker

Madigan doesn’t just control the strings to various campaign war chests. He directly controls the entire legislative process, which means that a legislator’s favored bill will go nowhere without his blessing. Under current House rules, no bill can even get to the House floor without the speaker’s approval. That’s unusual, compared to how other state legislatures operate. Madigan effectively controls the legislative agenda, and can control the substance and timing of what will be brought up for a vote.

This concentrated power “enables party leaders to reward loyalists and penalize dissidents,” DePaul University Professor Wayne Steger told Chicago Magazine in 2010. adding that it also allows leaders to shut down “any reforms that might weaken the party control over government.”

Could Madigan Be Ousted?

For Madigan to hold on to his position as Speaker next January, he needs the support of at least 60 House members. He’s been making calls to lawmakers to shore up his support. With 74 Democrats in the House right now, and 15 calling for Madigan to step down, the math might not add up for him this time. But the election between now and January could move the Democratic caucus in Madigan's favor.