How #MeToo Redeemed the ERA in Illinois, Ushered Madigan Out and Gave Women their Voice 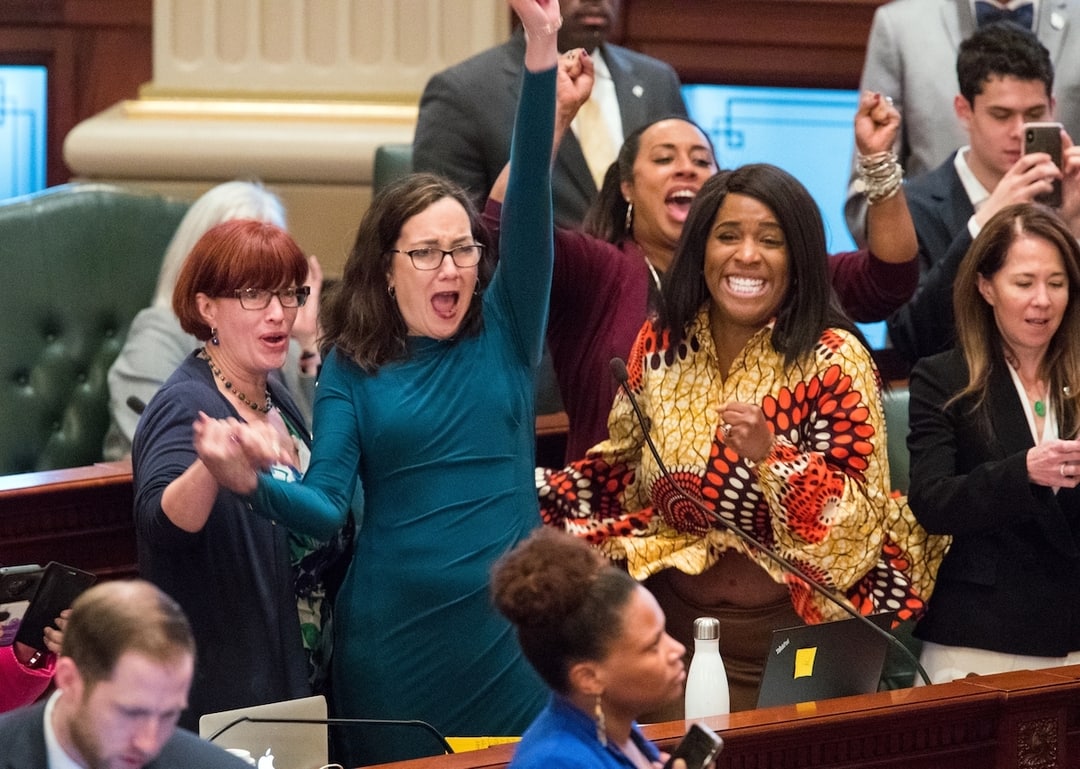 As veto session winds down in Springfield, let’s look to 2022 - the 50th anniversary of the passage of the Equal Rights Amendment by both the U.S. House (354-24) and Senate (84-8), with wide margins and little controversy. To become part of the Constitution, the measure needed ratification by 38 of the 50 states in seven years’ time. And the ratifications rolled in steadily over the next several months, underscoring the attitude many had about ensuring that “equality of rights under the law shall not be denied or abridged by the United States or by any state on account of sex.”  With the original deadline approaching, 35 states had ratified the ERA  (Illinois was among the 15 states that did not ratify), and so the measure was granted a short, three-year extension to get ratification from three of the 15 remaining states. But as time went on, momentum slowed, opposition built, and the measure faced increasing peril. The ERA was unable to get even one of the remaining 15 states on board and so on Wednesday, June 30, 1982, there were both celebrations and mourning to mark the day the ERA failed to be ratified.


In the decades that followed, there were efforts across the nation to revive the ERA, and in Illinois, they were met with mixed success. In 2003, the Illinois House (but not the Senate) voted to ratify, and in 2014, the Illinois Senate (but not the House) embraced the measure. For those in favor of women’s equality and rights, Illinois’ history with the ERA was a black-eye that female lawmakers would one day redeem, and the fall-out would be seismic. It would take decades from this early experience until the #MeToo movement, when the fledgling efforts of the early proponents for women’s equality would finally bear some fruit. And the circuitous route to get there is as interesting as it is revealing.


Those Were The Days

In 1971, the world could read the Pentagon Papers in the New York Times, Americans could watch a newly launched sitcom called, “All in the Family,” Chicagoans would say goodbye to the century-old Union Stock Yards (which were the poetic inspiration for Chicago’s nickname “Hog Butcher to the World”) and Springfield would welcome a young Michael Madigan, arriving as a newly elected House Member. He joined the male-dominated legislature, which included only four women: Republicans France Dawson, Lilian Karmazyn, Giddy Dyer and Democrat Eugenia Chapman. Madigan’s initial victory marked the first of 25 consecutive elections he’d win in a rise that has been well-documented.


In 1983, Madigan rose to the position of Speaker of the Illinois House of Representatives, a milestone that came on the heels of the ERA’s failure and Illinois’ relegation to the list of 15 states that did not affirm the measure. But the Illinois Statehouse counted 28 women among its ranks that year, an increase over the handful from the 1970s. Still, it took nearly 20 years for the number of female legislators to double to 55 in 2003, when the Illinois Senate failed to ratify the ERA. That may be called progress, but it sure was slow.


Meanwhile, Madigan continued his ascent, consolidating power and extending his reach, though he was curtailed slightly and only briefly from 1995-1997 when the Republican party took control. He was nearing his peak of power in 2013 when Chicago Magazine came out with an article crowning the Speaker (no other descriptors needed for him at this point) The King of Illinois. The article ponders the question about what Michael Madigan wants -- and explores his political operation, some murky dealings and patronage tales, and seems to suggest that it is actually the means that engage him, not any particular end. At that time, it might not have occurred to most Illinoisans just how close the King’s means were to bringing about a pretty dramatic end.

A hashtag on Twitter that was used in a tweet sent in October 2017 would be the inauspicious start to a powerful societal shift. The #MeToo movement brought a heightened awareness to empower sexually harassed and assaulted individuals, especially young and vulnerable women, through empathy, solidarity, and strength in numbers. It aimed to support them as they break their silence and publicly share stories of their experience, especially in the workplace. Within hours, the tweet received thousands of replies and by the end of the year, it had become a bonafide movement, a touchstone sparking more than just conversations, but actions as well.


Months later, in 2018, recently retired State Senator Heather Steans (D-Chicago) picked up where her predecessors left off and carried the ERA in the Senate, saying, in a nod to the movement, “I think voting to ratify the ERA helps give voice to these women and say, ‘We hear you, we are with you and we agree.’”


In another move of female solidarity, prior to the ERA vote, the Senate’s newly formed bipartisan women’s caucus announced it was supporting the effort. Senator Karen McConnaughay (R-St. Charles) pointed out the amendment is the first piece of legislation the caucus has endorsed, a move she called “fitting.” The simple amendment that languished for so long had caught fire by modern technology and was back in the spotlight.


The Illinois House voted several weeks later in favor and it was official: Illinois’ ratification of the ERA was a done deal. “It was a long time coming,” Steans stated in a recent interview. “And it is largely symbolic, but it is still very important. Constitutional protections on gender aren’t currently the same. Most other countries offer higher protections for women than we do here in the U.S.” When the Illinois Legislature finally passed the ERA, the body included 72 women, accounting for 36% of the total number of lawmakers.

Even The Mighty Fall

#MeToo also precipitated the first cracks in Madigan’s armor, as multiple women spoke out against a culture of pervasive sexual harassment and bullying in Springfield. Campaign staffer Alaina Hampton’s claims against a Madigan insider went unanswered, an inaction that caused outrage, resulted in a settlement, and was followed by federal charges regarding a decade-long bribery scheme involving ComEd and Madigan. The speaker tried to weather these storms, but the growing chorus to give up his leadership finally snagged the smooth operator. He stepped down on January 13, 2021. While some would say there were multiple factors leading to his departure, for the women in the legislature at the time, it really came down to a single factor: the female legislators.


Steans provided the office for Ms. Hampton to come forward. “It was so powerful,” Steans said of Hampton’s story. “And you can’t survive when you have such credible people coming forward.”


“Yes, it was women who took him down,” said former Rep. Margo McDermed (R-Mokena) who represented the 37th District from 2015-2021. “They were the only people willing to do it.” McDermed explained that Madigan maintained a deeply entrenched network of people in power who had shared interest in preserving it. Since women have been traditionally excluded from those power structures, they were the ones in the position to dismantle them from the inside.


Both women pointed to current state Representative Kelly Cassidy (D-Chicago) as a driving force in these powerful events. Rep. Cassidy explained that she and several other women banded together in a group that included several newcomers and would be referred to as 'The 19.'


“One big factor was the women who came to the legislature after the 2018 election,” Cassidy says. “They said, ‘I ran on women’s rights and my loyalty is to my constituents and if I come home, because of votes I made for that, I’ll have accomplished what I set out to do.’ That kind of built-in loyalty and dedication to the cause is amazing.” And that focus and determination would help move forward an agenda that disavowed bullying and embraced equality. The 19 were among the first to question Madigan’s speakership. They started to normalize the possibility to others, who recognized the totality of events facing him and began to take action to choose another.


Perhaps McDermed nailed the spirit of the women by saying simply, “Women are braver.”


Speaking of Madigan’s resignation, Cassidy remarked, “It sure wasn’t easy -- there were tears, and it was grueling at the time, but it was necessary.”


Still, Cassidy prefers to characterize Madigan’s stepping aside not as some great victory or take-down, but as an excellent example of what she calls the need to “normalize change.” Cassidy explained that when a state has someone like Madigan calling the shots for almost 50 years, that becomes the norm. Change feels strange in comparison to that static, "the way it’s always been done" manner of doing things. Cassidy, serving as representative since 2011, believes that the objective is greater than the removal of any one person. “The goal isn’t so much who is going to be the next speaker, but the fact that there will be a different one,” Cassidy emphasized.


None of the women interviewed believe the necessary changes have been fully completed, but they are cautiously optimistic.


Steans, who is encouraged that the recent energy of Springfield women has resulted in reproductive rights and equality legislation, accountability provisions,  and ethics reforms commented, “Things haven’t changed nearly enough. There are still the dynamics of power and a control nexus by men.”


McDermed echoed that sentiment. “The current leadership was developed under the system that Madigan created,” adding that the lawmakers should continue to act against the toxic culture that thrived for so long in Springfield.


Rep. Cassidy, providing comments after successfully fighting to repeal the 1995 Parental Notice of Abortion Act this week, which she said has been on her to-do list since it was passed while she worked at the Chicago Chapter of the National Organization for Women said, “It’s been an amazing week and this is huge,” then she reflected on the recent past. “There is definitely more to do. We have to work on imagining what a different operating system might look like and get people accustomed to it.”


Illinois’ early pioneers of equality were probably thinking along those very same lines when they picked up the banner to fight for equality. Though the change they wanted might not have come in their lifetime, the quest endured, and the ERA and #MeToo might provide a helpful lesson to think that it always will.