Thirty three states and the District of Columbia tax individuals making $100,000 annually more than Illinois would under a new proposal. 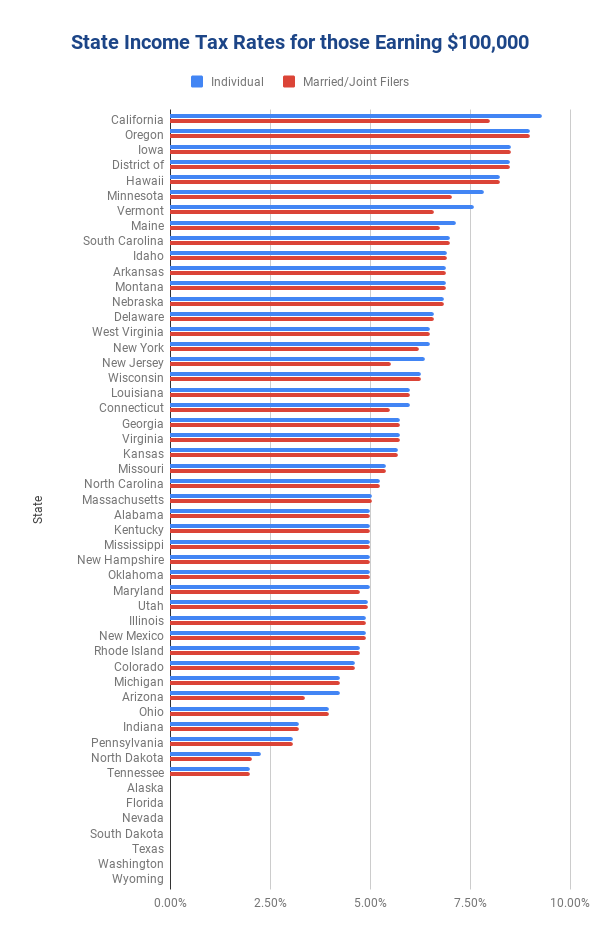 California tops the charts for individual income tax rates for those making $100,000.
Center for Illinois Politics.
Read the full report »

California tops the charts in this regard, taxing individuals earning $100,000 at 9.3 percent and 8 percent for married/joint filers.

Oregon follows with a 9 percent tax on individuals and joint filers.

Closest to Illinois' proposed rate of 4.9 percent for individuals and couples filing jointly earning between $10,001 and $100,000 annually are Utah and New Mexico, which tax at 4.95 percent and 4.9 percent, respectively.

Seven states have no income tax at all -- Alaska, Florida, Nevada, Texas, Washington, Wyoming, and South Dakota. Tennessee and New Hampshire others only tax individuals on interest and dividends.

Illinois currently taxes all income at a flat rate of 4.95 percent. That rate isn't the full picture - recent studies by groups including the Tax Foundation and WalletHub have found the state's total tax burden of state and local taxes is among the highest in the nation.

But the Illinois Senate passed a resolution by a 40-19 vote last week that would amend the state constitution to allow the state to tax higher earners higher rates.

The measure now heads to the Illinois House, where it must be approved by three-fifths of the chamber’s members to be placed on the 2020 ballot. To amend the state constitution, 60 percent of those who vote on the referenda question must approve it.

Proponents argue that the vast majority of Illinoisans would see an income tax break and gives a boost to the neediest residents, while opponents say it encourages unchecked government spending and drives residents out of state.

The House's consideration of the issue comes as anti-tax group Ideas Illinois, an arm of the Coalition for Jobs, Growth and Prosperity, Monday launched a six figure ad buy in the Chicago and Springfield media markets attacking the plan new Gov. J.B. Pritzker has dubbed as a "fair tax." The commercial, as first reported by the Chicago Sun-Times, suggests the billionaire governor fraudulently sought tax breaks for his Astor Street mansion. That property's rehab is reportedly the subject of federal investigation.

Along with Ideas Illinois, pro-tax group Think Big Illinois, which is partially funded by Pritzker and managed by members of his campaign staff, has spent more than $3 million promoting the tax in broadcast and cable ads across the state.