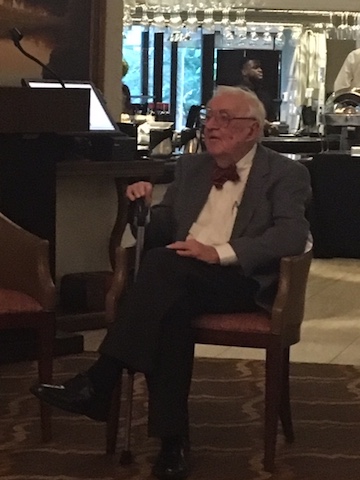 But former law clerks for Stevens, one of the court’s longest-serving and most influential justices, came to understand his makeup as an unforgettable blend of humanity and Midwestern sensibility.

Stevens, who died Tuesday following a stroke at the age of 99, would often head into the cramped office shared by his clerks and plop down in a corner armchair to talk through various cases. He’d join them in the court’s cafeteria to talk about the Chicago Cubs, and invite them home to Arlington, Va., for casual dinners with his beloved wife, Maryan.

“He was the most unassuming, unpretentious and relaxed person you could imagine,” Connie Trela, who clerked for Stevens in 1980, said.

“Members of a bridge club he belonged to in Florida knew him as John Stevens, lawyer from Illinois - they didn’t even know he was on the Supreme Court,” Trela, now a partner at Sidley Austin, said.

Stevens amassed close to 100 law clerks in his 35 years on the court. They frequently gathered for reunions - events which grew from intimate gatherings held at the court to jam-packed events where spouses and children joined in on the fun.

In the first years after his 1975 nomination, Stevens had a customary two clerks per term. Over time, that number grew to four, as Stevens refused to participate in what is known as a “cert pool” - the mechanism by which the Supreme Court manages the thousands of petitions it receives by having the justices’ law clerks pool together to read them and summarize various cases for the justices as a group.

But Stevens felt strongly that it was an unhealthy practice for the court, Ed Siskel, formerly Corporation Counsel for the City of Chicago, now Chief Legal Officer for Grosvenor Holdings, said.

“Instead, we would review all of those petitions ourselves,” Siskel said. “It meant there was a huge workload - I really respected that he thought it was important to personally review the material.”

Siskel clerked for Stevens in 2001 and 2002, when the justice wrote the majority opinion declaring the Constitution did not permit the execution of those who are mentally disabled, as well as a case declining to expand the rights of property owners around Lake Tahoe. It was in that opinion, where Stevens referenced Mark Twain, who described Tahoe’s waters as “not merely transparent, but dazzlingly, brilliantly so.”

Other notable cases included his writing of the court’s 2004 majority opinion to bring prisoners held at Guantanamo Bay under the jurisdiction of the federal courts, and impassioned dissents from Court opinions to stop the 2000 presidential recount, and the Citizens United v. Federal Election Commission case on corporate election spending in 2004.

Siskel recalled that Stevens often rose early, and got more done between the hours of 5 a.m. and 7 a.m. than many could in a day.

“It was really a remarkable experience. He really liked to prepare for oral arguments by sitting around in his chambers, talking through the cases with us,” he said. “Some justices want you to prepare memos, that was not Justice Stevens’ style, he enjoyed the give and take of conversation and debate. It was one of the most heady experiences for a young lawyer  to sit around with a brilliant jurist like that and talk about some of the biggest cases of the day.”

At the last of the clerk reunions - held at a Ft. Lauderdale Country Club- Stevens still had the ability to recognize those he spoke with by sight and by name, Trela said.

He spent time catching up with Trela and Siskel about their children, their work, and the Cubs.

On Tuesday, Stevens’ secretary emailed former clerks to let them know that he was in the hospital following a serious stroke.

“I was deeply, deeply saddened to lose him, but at the same time really gratified by the retrospective profiles that I’ve seen about his 99 years of a life well lived and the indelible stamp that he put on the court and on the country,” Siskel said.