The top female candidates for Mayor of Chicago—all of whom, for the first time, are women of color—have amassed their war chests in markedly different ways 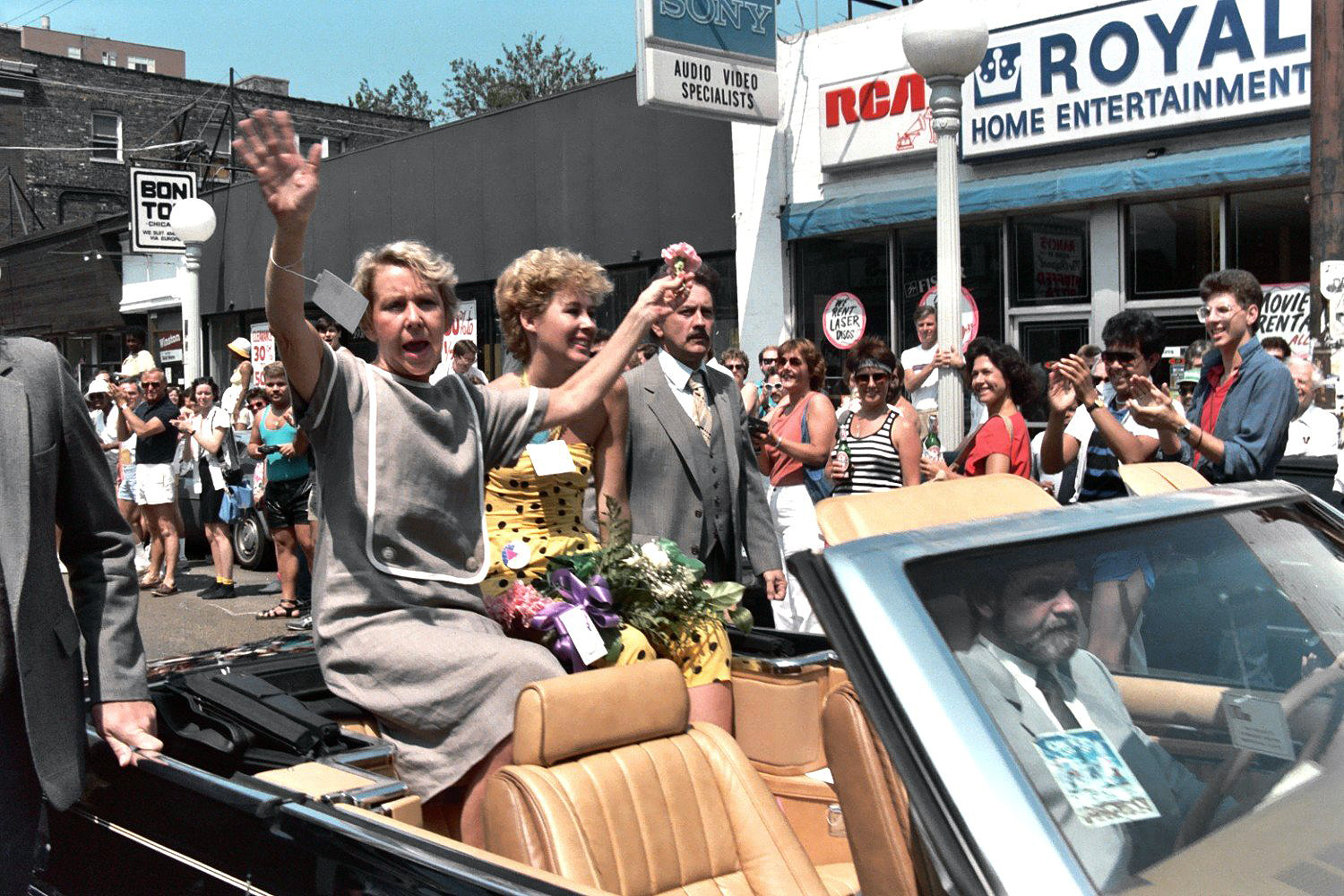 Not since Mayor Jane Byrne’s unsuccessful re-election bid against Harold Washington in 1983 have women brought so much money into the Chicago mayor’s race. Byrne appears here in the 1985 Chicago Gay & Lesbian Pride Parade.
Photo by Alan Light
Read the full report »

Note: This article has been updated to reflect Chance the Rapper’s $400,000 contribution to Amara Enyia on Jan. 15.

In the diverse and crowded race to replace Chicago Mayor Rahm Emanuel, Toni Preckwinkle’s biggest campaign contributions have come from the Service Employees International Union (SEIU) and Fred Eychaner, one of Illinois’ most prolific supporters of LGBT rights. Susana Mendoza’s war chest, meanwhile, has been infused by trial attorneys and laborers unions. Lori Lightfoot’s family has devoted significant personal funds to her mayoral bid, with her wife’s longtime boss sending in another large check, while Amara Enyia has leaned almost entirely upon support from celebrity musicians Chance the Rapper and Kanye West.

The top female candidates bidding for the job—all of whom, for the first time, are women of color—have amassed their war chests in markedly different ways, a deep dive into campaign fundraising data trends by the new Center for Illinois Politics shows. Not since Mayor Jane Byrne’s unsuccessful re-election bid against Harold Washington in 1983—when the feisty Sauganash Democrat made headlines for amassing $10 million, roughly $25 million today if adjusted for inflation—have women brought so much money and respective types of clout into the Chicago mayor’s race.

It’s been 40 years since Byrne served a term as Chicago’s first and only female mayor. Nationally, the number of female mayors—and number of women of color—has grown in recent years, according to Rutgers University’s Center for American Women in Politics. As of last August, 23 of the 100 largest American cities had female mayors. Seven of them were black, two were Asian and one was Latina.

With just over a month until the Feb. 26 municipal election, trends show that Cook County Board President Preckwinkle, a former alderwoman from Hyde Park, is backed by the city’s social and economic progressive base, as the top donations in her $2.77 million war chest include $1.93 million from the Service Employees International Union and a $100,000 personal check from Fred Eychaner, the chairman of Newsweb Corporation who was instrumental in the passage of Illinois’ gay marriage legislation. Her average individual contribution, at $13,178, is the second highest in the race, next to former U.S. Commerce Secretary Bill Daley.

At the same time, State Comptroller Mendoza, a former city clerk and state representative, has tapped into the traditional support base of powerful Illinois House Speaker Michael J. Madigan, raising a total so far of $1.14 million for her mayoral campaign, her contributions averaging $7,036 each.

Because contribution caps were lifted in the Mayor’s race after businessman Willie Wilson gave his campaign $100,000 last spring, Mendoza can also draw upon the more than $500,000 she raised while running for comptroller. That includes more than $55,400 from the Madigan-run Democratic Party of Illinois campaign committee, $28,500 from the International Brotherhood of Electrical Workers, and a combined $66,900 from various labor union political action committees.

“The large amount of campaign contributions to these female candidates is directly tied to their being strong, viable candidates,” University of Illinois at Chicago Political Science Professor Christopher Z. Mooney, a Center for Illinois Politics board member, said.  “Few give money to sure losers, especially in Chicago politics. These contributions are especially noteworthy in that these women of color are receiving tremendous respect for their accomplishments and potential.”

Back in the 1980s, Byrne was heavily criticized by opponent Harold Washington for receiving much of her money in the form of sizable checks from city contractors, as opposed to smaller contributions from city residents, the Chicago Tribune and Sun-Times reported at the time.

Today, fault lines are emerging among the state’s most powerful unions, as Preckwinkle, who has received the support of service unions, including SEIU and the United Food and Commercial Workers, is expected to receive campaign money from the Chicago Teachers Union, who endorsed her in early December. Mendoza, meanwhile, has locked in support of the traditional building trade unions.

Lightfoot, an attorney and former federal prosecutor, has so far leaned on the support of her family and friends in raising just over $1 million, with a relatively small average donation of $1,462 per contributor, compared to Mendoza’s $7,036 and Preckwinkle’s $13,178 average donations. The Lightfoot family has contributed a total of $67,477. Mary Dempsey, who served as Chicago Library Board Commissioner and was the boss of Lightfoot’s wife, Amy Eschelman, gave the candidate $52,276.

In launching her mayoral bid last spring, Lightfoot suggested plans to tap into a national network of LGBT donors and activists, naming gay activist and fundraiser Michael Bauer as her finance chairman. Yet, to date, some of the biggest names in the LGBT community have sent checks to her competitors. Along with Eyechaner’s donation to Preckwinkle, Laura Ricketts wrote Mendoza and Preckwinkle checks for $12,500 each on Dec. 28. Lightfoot has, however, received smaller checks from a few members of the local LGBT community, including Jennifer Rule and Jennifer Pritzker.

Speeding up vs. slowing down

Analysis by the Center for Illinois Politics shows that while Preckwinkle and Mendoza’s donations have picked up speed in recent months—Preckwinkle received $500,000 from SEIU on Jan. 8 and the Laborers International Union of North America gave Mendoza $250,000 on Jan. 7—Lightfoot’s have slowed down since the summer.

Public Policy Consultant Amara Enyia has raised about $610,000, money which includes a Jan. 15 donation of $400,000 from Chancelor Bennett, a musician known best as Chance the Rapper. His check to Enyia—who has been critical of large checks from single contributors flowing into her rivals’ campaign accounts—is the single largest individual donation in the race so far, records show.

Cook County Circuit Court Clerk Dorothy Brown has raised about $100,000—but is expected to be dropped from the ballot, after a report from the Chicago Board of Elections found she’s short of the number of required petition signatures.

With Preckwinkle and Mendoza siphoning off a majority of funds from traditional Democratic sources, former Commerce Secretary Bill Daley, the youngest son and brother of the city’s most famous political dynasty, has cleaned up in the business sector, with the vast majority of his $4.1 million coming from key members of the region’s business community.

Among them: Aon founder Patrick Ryan has given $250,000 to Daley, as has private equity investor John Canning, Jr., the chairman of Madison Dearborn partners, and MDP CEO Paul Finnegan donated $200,000.

J. Christopher and M. Jude Reyes, executives at Reyes Holdings, and brother David Reyes, CEO of Reyes Beverage Group, have collectively given Daley $275,000. The Crown family, whose holdings include the Chicago Bulls and the ski resort of Aspen, have given him a total of $75,000.

Daley also donated $500,000 in personal funds to his own warchest. Daley’s average contribution is the highest in the race at $17,071.

Northwest side businessman Brian McCormack—former Police Superintendent Garry McCarthy’s exploratory committee chair—has given McCarthy $94,300, while Lettuce Entertain You Founder Richard Melman has given him $35,000. McCarthy’s war chest stands at just over $1 million, with an average contribution of $2,116.

Former Chicago Public Schools President Gery Chico has raised $1.5 million, the largest checks coming from the Mexican American Political Action Committee, which gave him $43,400, and $50,000 from Nidia Puig, president of real estate company Puig Holdings. Wheels Service Fleet Founder Jim Frank gave him $35,000, and Chico has given himself $29,000 so far, filings show. His average contribution is $4,172.

Of the top 10 candidates in the field, Daley has raised the most, followed by Preckwinkle, Mendoza, Chico and McCarthy.

The Center for Illinois Politics is a nonprofit, nonpartisan organization dedicated to providing clear, fact-based information to encourage more Illinoisans to be active in politics. This article has been reviewed by a bipartisan panel of former lawmakers, political analysts and academics to ensure its nonpartisan nature.