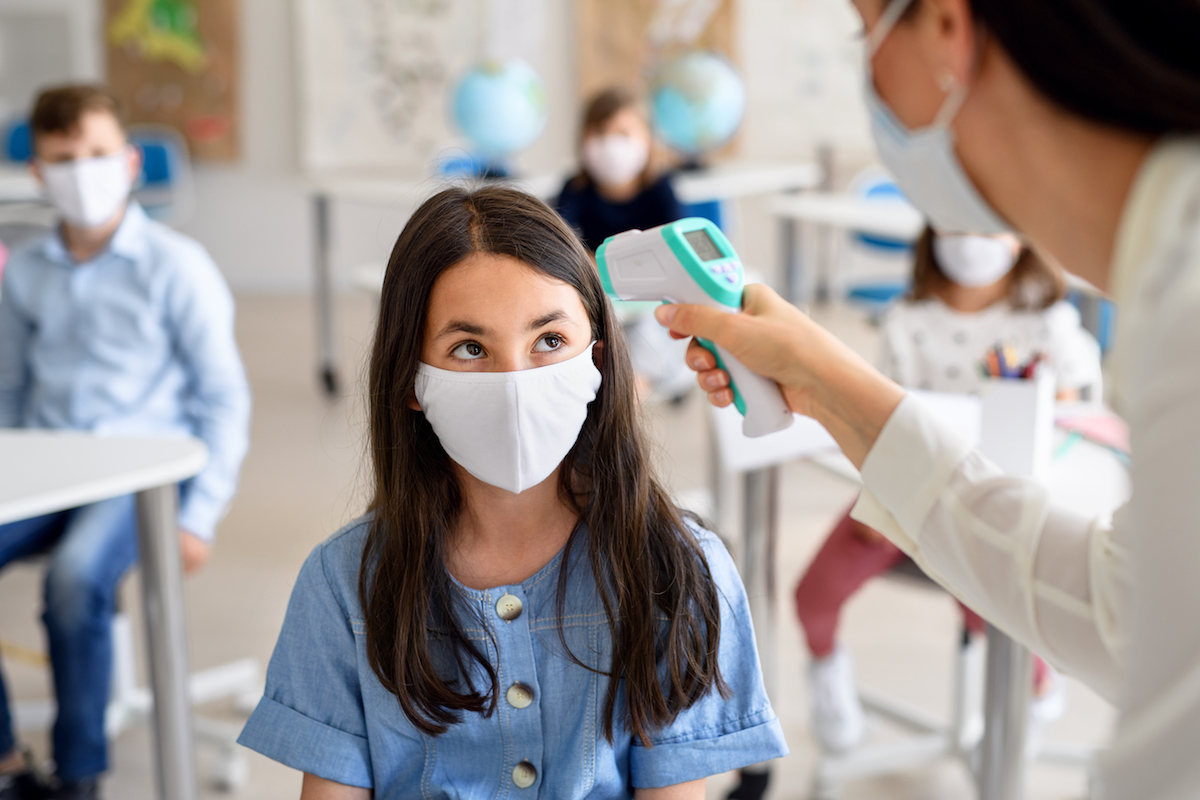 Nearly everyone recalls the black and white film clip from the Wizard of Oz where a disoriented Dorothy wakes up after being hit on the head during a tornado and babbles in astonishment about a place called Oz, telling Auntie Em, “I tried to get back for days and days, but it wasn’t a dream. It was a place – a really truly live place.” And, as this school year winds down, Dorothy’s timeless sentiment of something the same, but yet totally different resonates strongly with today’s students and their families, who – while COVID raged and turned their homes and schools upside down – are tentatively assessing what happened and what comes next.

For now, the onslaught of COVID mitigations are on the decline, things seem to be “getting back to normal,” (whatever that means) and families, schools, and researchers, who understand there is no going back, are trying to plan better in the future.

For high-schoolers taking the SAT, scores reflected a 7.7% decline in English and a 14% drop in math. Nobody was surprised, least of all parents who were manning their home front, which reluctantly and without much notice, were forced to transform into temporary learning centers, featuring slapdash desk and chair combos, a mixed bag of supplies, and regrettably, little knowledge on managing glitchy remote learning processes.

Tony, a father of two high-school boys who attended Chicago Public Schools (CPS), said a big hurdle with remote learning was trying to get his kids to take it seriously. “So much of it fell on the kids and they really struggled with motivation,” Tony reflected. “They missed the collective aspect of traditional classroom learning.” Many parents can relate to having real problems just getting their kids out of bed in the morning to tune in to their remote classes. And this observation is backed up by research, which reports that teachers and students have both lost so much of what used to keep them motivated. An article from Harvard Ed. Magazine, argues, “without the ballast of most extracurricular activities…to keep them engaged, many students lost the motivation this year to turn in homework or turn on cameras during remote lessons.”

One positive Tony could summon is the strengthening of ties between his sons, their coaches, and athletic teammates. That’s because when instruction went online, his sports-playing sons’ coaches doubled down and found creative ways to keep plugged-in with the players while they weren’t able to convene in person. “They sent special work-outs to the boys that they could do at home,” he recalled. “And all their efforts provided some sense of stability and connection for the kids.”

Once in-person learning resumed, Tony’s boys were able to re-establish the academic connection that remote learning interrupted, but he is quick to point out that is likely because they have a leg up on others at CPS. Tony’s sons attend selective enrollment schools (which offer an accelerated program to meet the needs of Chicago's most academically advanced students), they had one-to-one laptops before the pandemic started, and live in a home with many resources, like WiFi. It’s hard to be representative when you are part of a group of over 330,000 students in the district’s 636 schools.

Mental Health Struggles
In addition to the academic slide, students are also struggling socially and emotionally, which is intuitive but again supported by growing research. According to a Centers for Disease Control survey of high school students, more than a third of them reported experiencing poor mental health during the COVID-19 pandemic, with 44 percent saying they persistently felt sad or hopeless in the past year.

Acknowledging the priority of this issue, Illinois lawmakers passed a bill that became law in 2022 and provides students with five mental health days per year, which can be taken without a doctor’s note. This emphasis was echoed by the U.S. Secretary of Education, Miquel Cardona, who recently launched a listening tour of schools across the country, where he heard repeatedly from families about students’ mental health. According to the L.A. Times, Cardona is calling for every student to have access to a mental health professional, participate in an extracurricular activity, and receive extra support like regular tutoring to bridge learning gaps.

Indeed, months after in-person learning became the status quo in Illinois schools, chronic absenteeism remains a big, and growing, problem. In 2021, as in-person learning became the norm, chronic absenteeism – defined as missing on average 18-20 days of school – rose to 21.2 percent, up 5 percentage points from 2019. Whether this uptick is because the learning loss became too hard to bridge, or because the mental health issues loomed too large, or because the lack of supports and motivation became too great to overcome, or a combination of these and other factors, one thing is for sure: too many Illinois students just aren’t coming back to school.

Balancing Act
“I’ve learned to calm down, improvise, provide grace, and develop options for families,” said Dr. Sharon Kherat, Superintendent of Peoria Public School (PPS), when asked about the past two years. “There has been a huge learning loss and we have to regroup from that.”

“The pandemic really affected the learning of the little ones in a very negative way,” Dr. Kherat pointed out. “They couldn’t follow facial cues behind the masks and that’s confusing.” And for the older kids, Dr. Kherat said she’s seen a lot of anger. Righting these wrongs may take time and creativity, and Dr. Kherat is onboard with that.

One way PPS, which includes 27 schools and about 13,000 students, is working to close that gap is by introducing a modified calendar, one that contains built-in mental health breaks and additional support for struggling students. For example, instead of one week for Spring Break, the schedule allows for two weeks, but that doesn’t mean two weeks off for the students.

“One of those weeks is for individualized help that teachers and staff can provide to struggling students – it’s a way to distribute the academic pie a little more evenly,” according to Dr. Kherat. Similarly, there is a longer winter break, with built-in days that are set aside so students can catch up in a smaller setting that is more effective.

A modified calendar is not the same as a year-round calendar, though their goals are similar. Also called a balanced calendar, schools operating year-round aren’t the norm in Illinois. But the pandemic could change that because these calendars provide the same hours of instruction, but they are structured in ways that can limit learning loss, provide more one-on-one focus – and with their embedded breaks, help foster better mental health.

PPS piloted their modified calendar and the response was extremely positive. Next year, the whole district will implement the calendar, pushing the first day of school up to August 3rd. The administration is convinced that adding time for personalized learning will help make up for what was lost during the pandemic and counter lingering effects that could continue to haunt students. Other initiatives they’re rolling out include Parent University to strengthen communication channels with the community and the introduction of a new curriculum.

School Board President Tony Mares from Springfield District 186 also maintains that students and schools are in a critical moment. “A lot of supports that take place in the classroom – like daily contact, direct instruction, individual attention – they were cut off with remote learning, and for many kids this was in the middle of academic and personal transitions for them,” Mares said. “We stopped school in March 2020 and you don’t just come back from that in August and act like nothing has happened.”

So, what do you do? Mares, who has been school board president since February 2021, says “My goal was to reestablish the connection that was lost, while at the same time continue to go forward.” And one way they are doing that in Springfield is with an expansion of their Summer Boost program. Like PPS, Springfield 186 is looking at ways to increase in-person learning opportunities.

With the help of federal funding, Springfield 186 bulked up their Summer Boost program (which was previously mostly for high school students) so it can provide greater offerings to middle and elementary school students. According to Mares, “It’s a substantial program – fully staffed with teachers, paraprofessionals, and administration.”

And while Mares sees the pitfalls of remote learning, one of the upsides of the pandemic was that the district was able to introduce a one-to-one laptop program for the students. Though he thought the computer sharing program in place before the pandemic worked well, he sees the one-to-one project as one of the few good things to come from COVID; the initiative was possible through government funding. “Going forward, we will have another tool to use to increase learning and improve outcomes, and that is a good thing,” the school board president commented.

A spokesperson for the Illinois State Board of Education (ISBE) said the agency worked with the P-20 Council to create the Learning Renewal Resource Guide to provide districts with 12 evidence-based strategies to support students’ recovery from the pandemic. Illinois schools have received $7.8 billion in federal pandemic relief funding and ISBE focused its portion (10 percent) of that federal funding on social-emotional and academic supports for students, including high-impact tutoring and afterschool/summer programming, supports to help schools be trauma-responsive, and partnerships between schools and community organizations to strengthen mental health supports.

Will the State Modify its Role in the Future?
For its part, ISBE maintains it “welcomes the General Assembly’s efforts to continue to strengthen the teacher pipeline and respond to the workforce issues that districts face,” pointing to the following:


It remains to be seen if individual Illinois school districts will have a greater say to implement local decision-making regarding learning loss or dealing with another COVID wave, but in the past regarding the unprecedented pandemic, Gov. Pritzker has held sway. In the meantime, you can expect to see school boards and administrators across the state implementing and sharing projects and initiatives to facilitate greater learning because for them, time is of the essence. In spite of all the beatings COVID doled out to teachers, staff and students, the former teenage roller-skating champion-turned Superintendent Dr. Sharon Kherat said, “It’s exciting to revamp how we approach struggling readers and learners. We are re-imagining our work and doing many things in a different way – one that is more intentional,” and in spite of everything, she sounds optimistic.