Following allegations against powerful aldermen Burke and Solis, we took a data-based look at clout 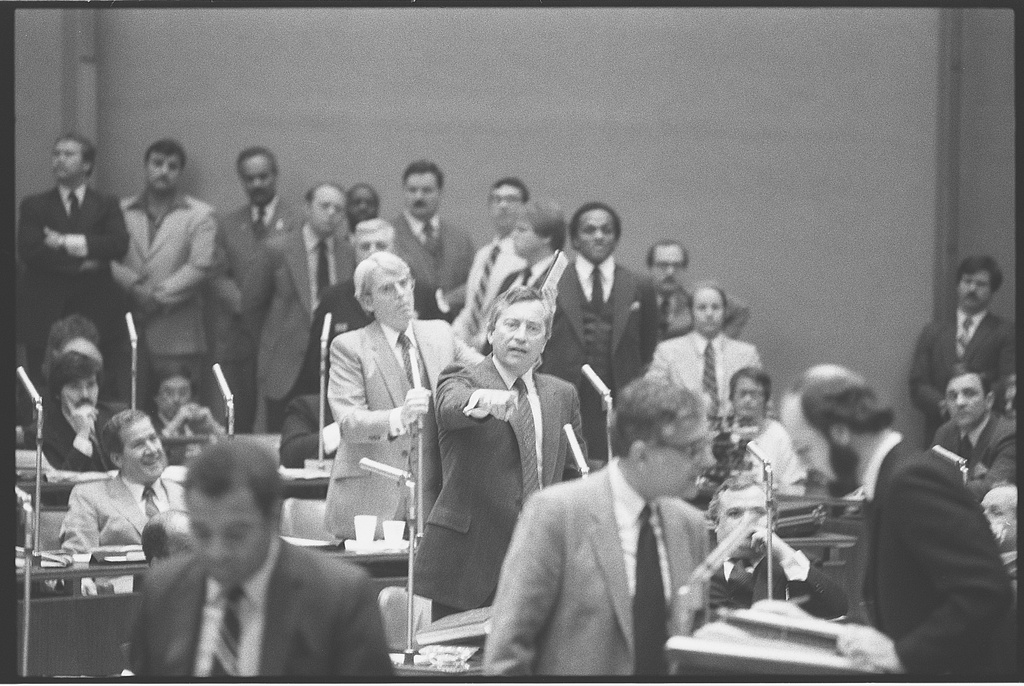 The clout of Chicago aldermen is reflected not simply in their pay, but in their discretion over large operational budgets to run various committees. 14th Ward Alderman Edward Burke, who long controlled the Council’s powerful Committee on Finance, is pictured here during the infamous “Council Wars” of the 1980s, standing behind former Alderman Ed Vrdolyak, who opposed much of Mayor Harold Washington’s agenda in his first term.
Lee Balgemann (Library of Congress)
Read the full report »

Money talks in politics, but in Chicago, salaries are just one piece of the pie that comprises an alderman’s power. Thanks to a rule allowing council members to accept or reject annual raises in their positions, which are technically considered part time, some of the city’s longest serving aldermen make thousands less than their more inexperienced peers. At the same time, their ability to chair various committees allows them tremendous, little-examined clout, with the executive authority to spend hundreds of thousands, sometimes millions of dollars on patronage jobs.

It’s a practice that puts Chicago in contrast with other major cities, a new data analysis by the Center for Illinois Politics shows.

Since 2006, council members’ salaries have been tied to the Consumer Price Index, which measures the rate of inflation. If the Index increases one year, an alderman can opt to have his or her pay bumped by that percentage. If it decreases, he or she can see their pay cut, but can also opt out of the decrease.

The positions are technically part-time, and many members have outside jobs, a practice that’s been been questioned in the weeks following a federal criminal complaint filed against Burke, an alderman since 1968 who earlier this month was charged in federal court with using his position to “corruptly solicit” business for his property tax law firm, Klafter & Burke.

While it’s not reflected in their salaries, Chicago aldermanic clout often comes in the form of running one of the city’s 17 committees, which comes includes ability to dole out hundreds of thousands of dollars for patronage jobs and operational expenses. This isn’t the money spent on council authorized projects, but money spent on making sure phones are answered, agendas are printed and projects are appropriately analyzed as they are presented and considered by the various committees.

The Committee on Finance, long chaired by Burke and now by O’Connor following Burke’s indictment, comes with the largest operational budget, by far, at $2.3 million. Figures from the city’s budget office show that $1.8 million of its operational expenditures this year go toward salaries and wages for finance committee employees. Also of note: A full $45,000 is spent on stationary and office supplies, and another $50,000 on legal fees, and $16,000 is on postage.

Visit the Center for Illinois Politics at www.centerforilpolitics.org