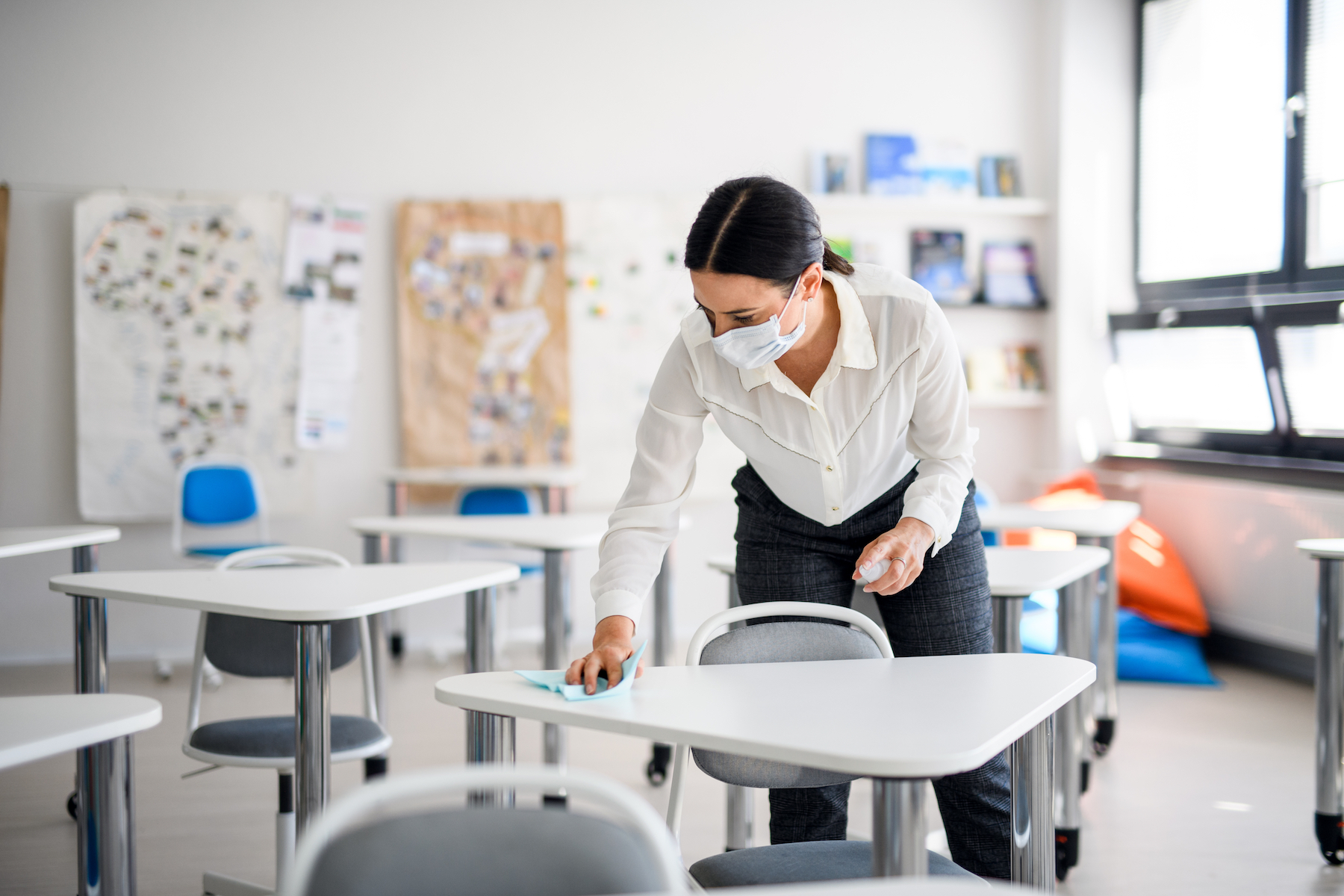 Last fall, as the latest wave of COVID illness was sweeping the country and hitting schools particularly hard, the Illinois General Assembly passed HB 2778, the School Employee Benefit and Wage Protection Bill with bi-partisan support. The legislation, if signed by Governor JB Pritzker, required two things of Illinois school districts: first, to cover all COVID “administrative days'' for any school or college employees to be used for all COVID-related absences like quarantining and testing, to save employees from using up all of their accrued sick time during the pandemic; and, second, to provide paycheck protection for hourly employees if a school or higher education institution has to close because of an emergency.

At the time, one of the chief sponsors of the legislation, Rep. Janet Yang Rohr (D-Naperville) commented, “All our education employees have stepped up during the COVID-19 pandemic. We know it’s been an incredibly difficult time, but they continue to show up and do whatever it takes to provide our students an outstanding public education. I am proud to sponsor this legislation that provides some relief to teachers and support staff.”

After its passage in the State house, there were rumors that Gov. Pritzker might not be in favor of it, but the wide margin by which it passed – 145-24 combined in both chambers –  made many think his signature was a fait accompli. Holidays rolled by, and still no signature. Then, on January 24, Gov. Pritzker held a press conference announcing his veto of the bill while voicing support for an alternative plan that would limit compensation only to those staff who are “fully vaccinated.” And, standing beside him as he made this announcement were the heads of the two largest education labor organizations, lending extra weight to the idea.

A spokesperson for the governor’s office declined to comment on this action by the governor, but rather referred to the official statement which read in part, “After productive conversations, Gov. Pritzker, the Illinois Education Association, the Illinois Federation of Teachers and other stakeholders announced that they have negotiated  a compromise that will keep students and teachers safely in the classroom without penalizing vaccinated employees for taking COVID-required sick time.”

Not soon after HB 2778 was vetoed, HB 1167 was placed on the calendar with House Speaker Emmanuel “Chris” Welch as sponsor. When asked to comment on the governor’s veto and the creation of revised legislation to include a provision that only compensates vaccinated employees, Illinois Education Association (IEA)  President Kathi Griffin commented, “The resolution we reached with the governor’s office on the language for House Bill 1167  ensures education employees do not have to exhaust their sick time when they are forced to take time off for COVID related reasons. It also means if schools close or switch to remote learning, hourly employees’ paychecks will be protected.”

No one can deny that Illinois’ schools have been hit incredibly hard by the pandemic, and that they’ve been working to respond to the unprecedented challenges associated with this novel coronavirus. The pandemic has turned schools upside-down with its quarantines, social distancing, social/emotional health, increased truancy and decreased test scores, in-person and remote learning, staffing shortages, and districts managing  a school day under difficult and shifting state mandates. And it’s often compounded by communities dividedon policies and procedures.

There is little question that our state schools need assistance, which is likely why the initial bill passed with broad support. But will the governor’s “compromise” end up securing that help or will it transform the issue into a political football? It definitely depends on how the bill is crafted and debated.

Will Incentives Edge Out Mandates?

Early on in the pandemic, Gov. Pritzker used mandates to try to combat the spread of disease. As soon as he announced one, those opposing it would file a lawsuit. Illinois school staff have been operating under a vaccinate-or-test program most of this year, but nobody is certain the mandate will continue to be a viable option going forward. This was underscored in mid-January when the U.S. Supreme Court blocked the Biden administration from enforcing its federal vaccine-or-test requirements for large private companies.

In this light, Gov. Pritzker’s move to compensate vaccinated school staff, and not those that are unvaccinated, could help pave a path for his plan to reduce illness and absences in schools and restore greater in-person learning on more solid ground. If passed, HB 1167 wouldn’t be easily subjected to court decisions that might overturn it as with mandates. But it would do so at the expense of those who object to being vaccinated, including someteaching staff.

So, it will be interesting to see if  the lawmakers who supported HB 2778 will  support HB 1167 in the same robust fashion this spring session. We reached out to several legislators from both parties who supported the original bill for their input on the new proposal and received two replies.

Illinois Senate Deputy Minority Leader Sue Rezin (R-Morris) replied, “My  priority is to ensure that schools remain open and teachers are afforded the appropriate time off during this new reality we live in. I look forward to reviewing the proposed language of the negotiated deal once legislation is filed.”

If the focus of the new bill is the same – getting teachers and school staff the assistance they need to do their jobs –  Rep. Dave Vella (D-Rockford) said he should be able to support the new proposal, “We can’t tell school district staff, ‘You just have to deal with it.’ We have to address these issues because we cannot afford to continue losing teachers and staff.”

And, according to IEA President Griffin, whose union represents 135,000 teachers, the compromise will include an opportunity to “work with our local school districts to provide COVID administrative days for the unvaccinated, including those who are testing each week in accordance with the Governor’s August executive order.”

Jordan Abudayyeh, Gov. Pritzker’s Press Secretary said in a written statement, “It is our expectation with all the stakeholders on board, the bill will pass.”

One group of stakeholders, the Illinois Principals Association (IPA), was not at the table for talks the first go-around and are hopeful they will be able to voice their concerns on HB 1167.

“We appreciated HB 2778 but we weren’t supportive of the unlimited nature of days off,” said Alison Maley, Government & Public Relations Director for the IPA. “And we are hopeful we will be part of the process creating the new proposal.” The IPA, like other stakeholders, is keenly interested in keeping kids and staff in schools, and hope their voice can be represented in the conversation.

During the fall legislative session, the IPA called for a cap on the number of days granted. Not surprisingly, these concerns were shared by other education groups, like the Illinois Association of School Administrators/Illinois Association of School Business Officials, who urged a veto on HB 2778  for several reasons. In a Call to Action last December, the group explained its support for the idea behind the bill, but expressed concern about unintended consequences, concluding that without a sunset provision, the legislation could become an unfunded mandate.

As of this writing, there is scant information on estimates of cost for such a program. Teaching staff are paid salary or hourly wage and benefits for sick days, and there is also the cost of paying for substitute teachers (when they can be found, which is incredibly challenging of late) or staff when absences occur. The thinking behind HB 1167 is that compensating vaccinated staff could be motivation to increase vaccination levels amongst all staff, which could ultimately reduce days off due to illness.

A lot can still happen with HB 2778 - first and foremost, there could be a move to overturn the governor’s veto. Or, it can be replaced without much controversy by HB 1161 and possibly include provisions which would address taxpayer and other stakeholder’s concerns. Or, the proposed vaccination status provision, or cost concerns, or a combination of the two – could blow-up the whole bill and turn it into a political hot potato. This spring session will occur in election season, after all, so there are a lot of unknown variables at play.

The General Assembly reconvened last week, but because of a snow storm, many legislators haven’t made it to Springfield and have been participating remotely. Plus, the spring session will be shortened this year, with an expected end date of April 8 (rather than the traditional late May timeframe), to accommodate the June 28th primary elections, including the governor’s race. So no matter what happens this session regarding HB 1167 – whether it moves at slam-dunk speed or turns into a tedious exercise of revision after revision – it should prove to be interesting.