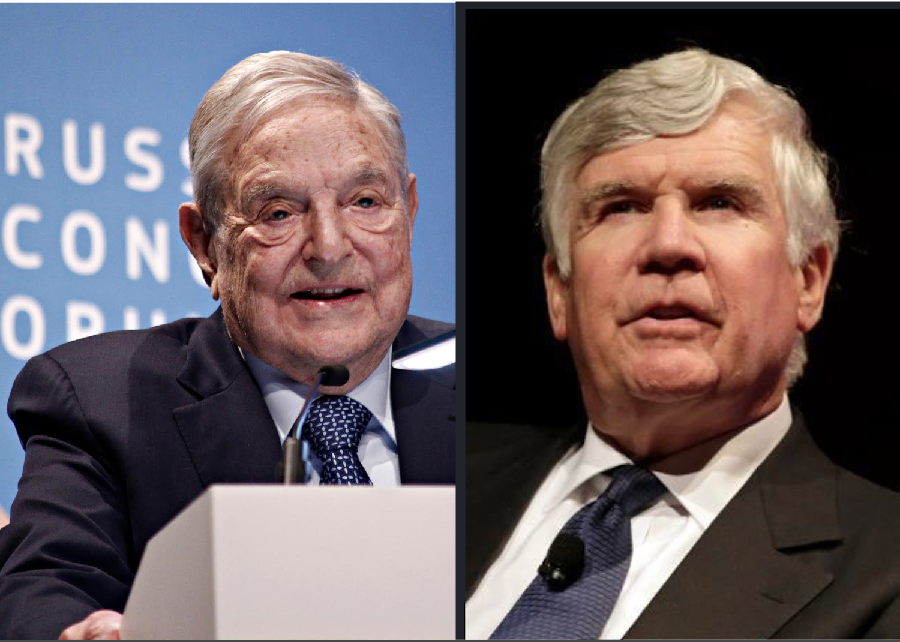 Illinois just came off the most expensive Governor’s race in Illinois history and nationwide.

Now the hotly contested Democratic primary race for Cook County State’s Attorney is already the most expensive of its kind in Illinois history, thanks to two billionaires.

In one corner, at age 89, stands legendary hedge fund operator George Soros, who through a PAC this week dropped $2 million into the war chest of embattled State’s Attorney Kim Foxx. Soros is worth $8.3 billion, according to Forbes magazine.

In the opposite corner, at age 71, is William E. Conway, Jr., founder of the financial conglomerate The Carlyle Group. He’s contributed a whopping $7.5 million so far to the campaign war chest of his son, former prosecutor Bill Conway, who is challenging Foxx. What’s more, the candidate’s father poured $5 million into his son’s campaign in January alone. The elder Conway is worth $3.5 billion, according to Forbes magazine.

It’s as if the two billionaires are slugging it out in the middle of a ring. And in a sense, they are.

George Soros stands out as perhaps the nation’s foremost deep-pocketed patron for progressive Democrats. And though not as personally active in political campaigns, billionaire William Conway, Jr. appears to be more in step with moderate-conservative establishment politicians.

Conway Jr.’s firm, The Carlyle Group, made substantial profits from investments in manufacturers of military hardware. The company’s long been cozy with national Republican power brokers, even putting President George H.W. Bush on its payroll after he left the White House. On the local front, records show Conway Jr. contributed to former Mayor Rahm Emanuel in 2016.

Soros’ PAC’s big contribution to Foxx is not its first.  He contributed $408,000 to her successful battle against incumbent state’s attorney Anita Alvarez in 2016.  But Soros’ support for Foxx appears to be part of a wider nationwide strategy.

According to Politico, four years ago Soros shelled out more than $3 million in seven district attorney races spread over six states. His goal: to elect Black and Hispanic candidates who would likely advance his push for criminal justice reforms, for example: sending small-time drug offenders to treatment centers instead of jail.

The evidence shows Soros’ money does have an impact.  Since 2014, Soros has spent more than $16 million in 18 county races. His favored candidates won 13 elections, including Foxx. This year he’s involved in 21 district attorney races nationwide, according to the Los Angeles Times.

Soros’ $2 million donation to Foxx was made through a Washington, DC-based Super PAC called Illinois Justice & Public Safety.  Four years ago Soros donated through another Super PAC with a slightly different name, Illinois Safety and Justice.

Super PACs are able to raise and spend unlimited amounts from individuals, corporations and labor unions to influence election results. One of the few restrictions on Super PACs is that they are not allowed to  work directly with the campaigns they are supporting.

The huge injection of money from Soros will no doubt allow Foxx to compete vigorously while she is still battling the fallout from dropping charges against “Empire” actor Jussie Smollett accused of faking a hate crime attack.

Another challenger, former federal and county prosecutor Donna More, picked up the endorsements of the Chicago Tribune and the Daily Herald. That could lead voters to give her candidacy another look. Also in the race is former Ald. Robert Fioretti, who in the last five years has lost three elections: one for Cook County Board president and twice for Chicago mayor.

With such heavyweight financial firepower backing Foxx and Conway, More and Fioretti are viewed as long-shots at best.