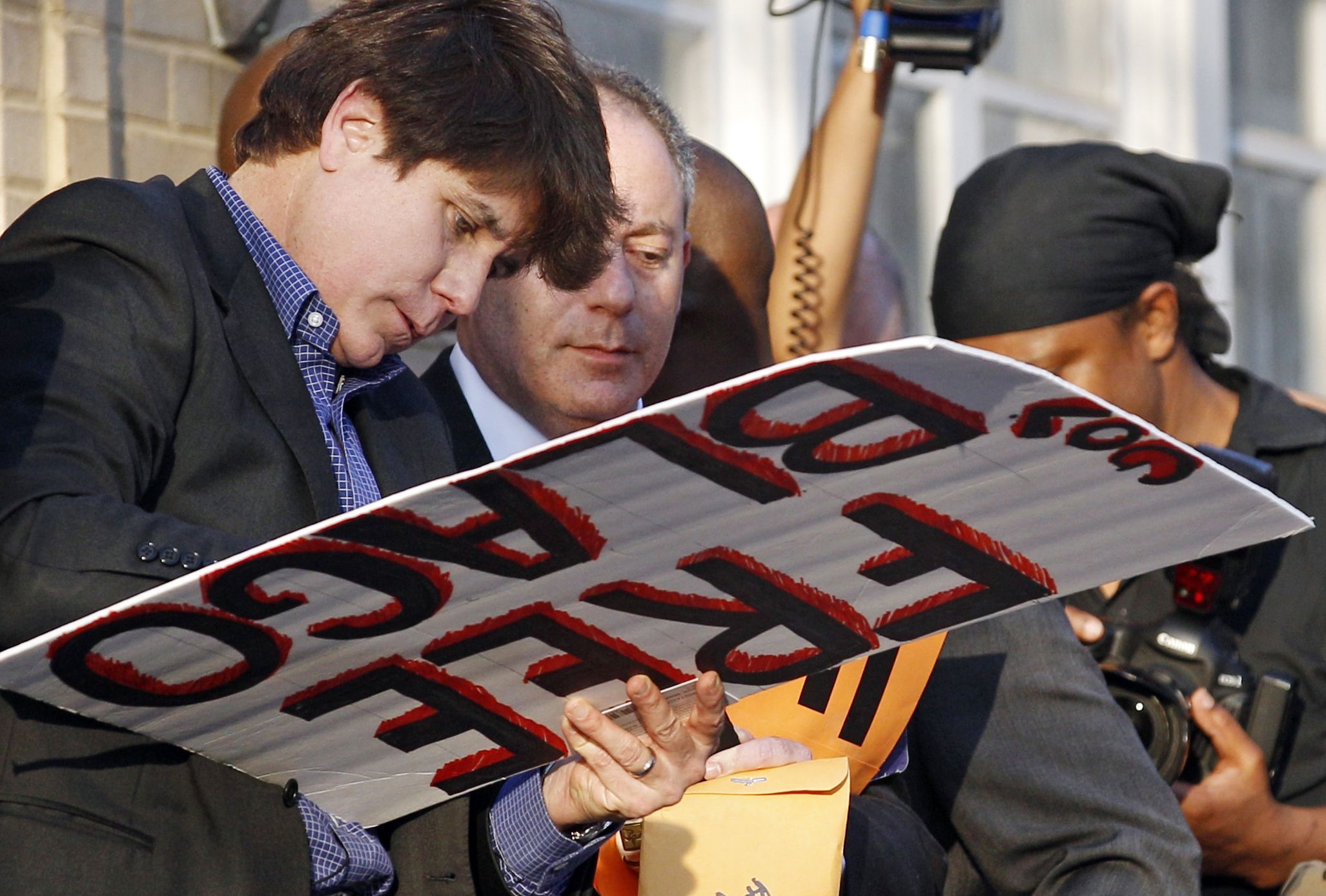 But the former Apprentice star, convicted of conspiracy and fraud charges in the attempt to profit off of President Barack Obama’s Senate seat isn’t the only Illinois governor or public official to face federal prison time due to corruption charges.

Going back to the 1850s, Illinois has the most governors who have been convicted of crimes - a whopping five, seconded by Alabama, which has three. Acts range from what today might be considered heroic - mobilizing the state militia against the Klu Klux Klan, in the case of North Carolina’s William Holden, to the offbeat, such as North Dakota Governor William Langer requiring state employees to buy subscriptions to a newspaper that he happened to own.

Here’s a look at who they are, and how their crimes and sentences compare:

Governors convicted on greater federal corruption offenses (specifically under violations of the Hobbs Act, RICO, the Travel Act, mail or wire fraud, or through establishing a conspiracy to defraud the US government):

Rod Blagojevich (D) - Illinois Governor, 2002-2009 (impeached by the Illinois General Assembly): Charged with conspiracy to commit mail and wire fraud and solicitation of bribery in 2008. More poignantly, he was accused of attempting to sell former IL Senator Barack Obama's newly vacant seat for “personal financial benefits”. Federal prosecutors characterized his conduct as something that “would make Lincoln roll over in his grave”. Sentenced in Dec. 7th 2011 to 14 years in a federal prison. Pardon currently being considered by Pres. Trump.

Otto Kerner, Jr. (D) - Illinois Governor, 1961-1968: Kerner had been a sitting judge in the United States Court of Appeals for the Seventh Circuit at the time of his indictment in 1972 for conspiracy, mail fraud, income tax evasion and lying to a grand jury, charges for which he was convicted of in 1973. The charges had been connected to a 1962 affair when the then-governor colluded with the owner of the Arlington Park racetrack to give him favorable race dates in exchange for cheap stocks on the racing company itself. Kerner was sentenced to three years in federal prison, though he only served six months - being released to treat the lung cancer that ultimately was the cause of his 1976 death.

George H. Ryan (R) - Illinois Governor, 1999-2003: Ryan was first indicted under federal charges for taking bribes in return for government leases and contracts while he was the Secretary of State for Jim Edgar. Then, he was again indicted and convicted in 2006 under charges of racketeering conspiracy, fraud and bribery (among other things) while both still Secretary of State and governor afterwards. Sentenced to six and a half years in federal prison in Sep. 2006, Ryan was released in 2013. He was refused a pardon or commutation of sentence by Pres. George W. Bush.

Ray Blanton (D) - Tennessee Governor, 1975-1979: Convicted in 1981 of mail fraud, conspiracy and extortion in the selling of liquor licenses throughout his term. Blanton had attempted to create a scheme where the owners of Nashville liquor stores would be beholden to him, either by being controlled directly or paying a 30% profits kickback. Served 22 months in a federal penitentiary. Nine of the charges against him were overturned in a federal court action in 1988. Died in 1996.

Edwin Edwards (D) - Louisiana Governor, 1972-1996: Convicted in 2001 for crimes including racketeering, extortion, money laundering, mail fraud and wire fraud. Edwards was widely known as one of the most powerful and popular players in the Louisiana political landscape, and had managed to dodge corruption charges for years before his apprehension. He was incarcerated in a federal prison for eight of his ten-year sentence, and was summarily released in 2011.

Richard W. Leche (D) - Louisiana Governor, 1936-1939: Leche, throughout his tenure, was largely seen as an example of political excess and malpractice, both things which ultimately led to him being sentenced to 10 years in federal prison in 1940 under charges of corruption and mail fraud. Paroled in 1945, Leche was furthermore pardoned by Pres. Harry Truman in 1953 under the suspicion that the harsh sentence was a result of partisanship. He died in 1965, having started working as a lobbyist for construction firms a few years before. Source: https://64parishes.org/entry/richard-w-leche

David Hall (D) - Oklahoma Governor, 1971 - 1975: Hall was charged in 1975 of federal racketeering and extortion charges involving paying to sway investments towards a state retirement fund. He was convicted of bribery and extortion and spent 19 months out of a three-year sentence in prison. Hall died in 2016, aged 85.

William Langer (R/Non-Partisan League) - North Dakota Governor, 1933-1934, 1937-1939: Langer was convicted in 1934 for soliciting political contributions from federal employees. More specifically, he had for a long while required state employees to pay a subscription fee to his own newspaper the Leader (which apparently was seen as acceptable practice at the time), but the overlap between federal and state systems due to the former’s economic relief measures taking over certain jobs in North Dakota’s public works unwittingly put Langer in dangerous waters and he was charged with attempting to defraud the United States relief system for more money. He was removed from the office by the North Dakota Supreme Court in 1934 and sentenced to 18 months in federal prison and a $10,000 fine. However, after three more trials, he was acquitted of all charges in 1935 and would go on to successfully run for governor in 1936. In 1940, he was elected to the US Senate, a position he held until his death in 1959.

Arch A. Moore, Jr. (R) - West Virginia Governor, 1969-1977 and 1985-1989: Moore was convicted in 1990 of widespread corruption charges involving extortion, mail fraud, obstruction of justice and filing false income tax returns throughout his 1984 and 1988 re-election campaigns. Moore had already been under the crosshair of legal authorities since the 1970s, when he and a top aide were implicated in an extortion conspiracy involving a state bank charter and $25,000, though they were both acquitted in 1976. The 1990 charges, however, included accusations that Moore had accepted $100,000 in illegal campaign contributions and attempted to extort almost $600,000 from a local coal executive in return for helping him get back $2.3 million in reimbursements from the state’s black lung compensation program. After filing a guilty plea (which he later tried to rescind), Moore served around three years in federal prison until 1993. He died in 2015, aged 91.

John G. Rowland (R) - Connecticut Governor, 1995-2004: Rowland was arrested twice under federal charges, once in 2004 in connection with a corruption scheme involving vacations, luxury air charters and home renovations for the then-governor, and again in 2014 for election fraud and obstruction of justice in connection with his role in the campaign of congressional candidate Lisa Wilson-Folley in 2012. Although in 2004 Rowland served only ten months in prison, his 2014 conviction netted him a 30-month sentence to be carried out starting fall 2016. However, he was released in May 2018. Rowland today works as a development director for Prison Fellowship Ministry.

Don Siegelman (D) - Alabama Governor, 1999-2003: A veteran of Alabama politics who served as Secretary of State and Attorney General before being elected governor, Siegelman was indicted by a federal grand jury in 2005 under the charge that he had sold a seat in the Alabama health board to healthcare service provider HealthSouth founder Richard Scrushy for $500,000 in donations to his 1999 campaign. On Jan. 2006, Siegelman was found guilty of bribery, conspiracy, mail fraud and obstruction of justice, and sentenced in 2007 to 88 months in federal prison (along with Scrushy, who got 82). Although he got out in 2008 on an appeal bond, Siegelman’s long legal battle (which even involved an email where Al Gore reached out to the ex-governor’s supporters and asked them to donate to his diminishing defense fund) culminated with the US Supreme Court refusing to hear his appeal case. Part of his appeal argument in the meantime was that if he was convicted then so could any other politician who bestowed a favor upon one of his supporters. Ultimately, Siegelman was sentenced to 78 months in prison 2012 (two charges had been retired by an appeals court in the meantime, diminishing his due time), for which he was released in Feb. 2017. He was refused a pardon by Pres. Barack Obama.

‍And here’s a look at Illinois officials who have been charged with corruption:

Aaron Schock (Congressman) - The Peoria Republican was indicted on 24 counts including theft of government funds, fraud, making false statements and filing false tax returns for the improper use of campaign funds; Charges were dropped in 2019 in exchange for payment of back taxes and return of funds to his campaign. (Charged in 2016)

Isaac Carothers (Chicago Alderman) - This Chicago Democrat was charged with bribery and tax evasion for accepting home renovations and other benefits from a development company in exchange for changes in zoning. Carothers pleaded guilty to these crimes and served 28 months. (Isaac charged in 2008; William charged in 1983)

Betty Loren-Maltese (Cicero President) - Convicted of racketeering, mail fraud, and wire fraud in an insurance scheme that saw seven people convicted in 2002 of draining $12 million from the town Cicero; Sentenced to 8 years, she served six. (Charged in 2001)

Nicholas Blase (Niles Mayor) - Charged with mail fraud for steering Niles businesses and the city to purchasing insurance from a local firm that paid him off through a shell corporation; Served 10 months. (Charged in 2006)

Rita Crundwell (Dixon Comptroller) - Convicted of theft of city funds for siphoning $53 million from city coffers over two decades as comptroller; Sentenced to 19 ½ years in prison. (Charged in 2012)

William Beavers (Cook County Commissioner) - Convicted of four counts of tax evasion for using $225,000 in campaign funds for personal use; Sentenced to and served six months. (Charged in 2012)

Barbara Byrd-Bennett (Chicago Public Schools CEO) - Initially indicted on 20 fraud charges tied to steering $23 million in city educational contracts to providers that repaid her with $2 million in kickbacks; Pleaded guilty in a plea deal to one count of wire fraud; Sentenced to 4 ½ years in prison. (Charged in 2015)

David Webb (Markham Mayor) - Pleaded guilty to accepting bribes from construction companies for giving them city business; Has not been sentenced yet. (Charged in 2017)

Donald Schupek (Posen Mayor) - Pleaded guilty to embezzling $27,000 from the village; Will be sentenced in September. (Charged in 2019)

Willie Cochran (Chicago Alderman) - Pleaded guilty to wire fraud for taking $14,000 from a ward charitable fund for personal uses; Sentenced to one year in prison. (Charged in 2016)

Edward Vrodlyak (Chicago Alderman) - Pleaded guilty to tax evasion in 2019 for his role in siphoning funds from the state tobacco settlement as legal fees for non-existent work and hiding those payments from the IRS; Pleaded guilty in 2008 to mail and wire fraud for a real estate kickback scheme and was sentenced to 10 months in jail. (Charged in 2016 for 2019 guilty plea; charged in 2007 for 2008 guilty plea)

Jesse Jackson Jr. (Congressman) - Pleaded guilty to wire and mail fraud charges for misusing approx. $750,000 in campaign funds for personal use; Sentenced to 30 months in prison. (Charged in 2013)

Sandi Jackson (Chicago Alderman) - Pleaded guilty to tax evasion in connection with $580,000 in unreported income from husband Jesse Jackson’s campaign funds (see above); Sentenced to 12 months in prison. (Charged in 2013)

Dennis Hastert (Speaker of the U.S. House) - Pleaded guilty to hiding money transactions in connection to a $3.5 million hush money payment to an individual he abused as a teacher in the 60s; Sentenced to 15 months in prison and $250,000 fine to be paid into a victims restitution fund. (Charged in 2015)

Dan Rostenkowski (Congressman) - Charged embezzlement, mail fraud, and obstruction of justice for using official funds for personal uses in 1994; Pleaded guilty to mail fraud and was sentenced to 17 months in prison in 1996; Pardoned by Bill Clinton in 2000. (Charged in 1994)

Please join us at our free public forum on Money in Politics on September 10th!