$3.5 billion is going to school construction projects. Here’s a look at where the money's landing.

A six-year, $45 billion infrastructure spending plan was approved by lawmakers in late May — a major goal for new Gov. J.B. Pritzker during his first year in office. 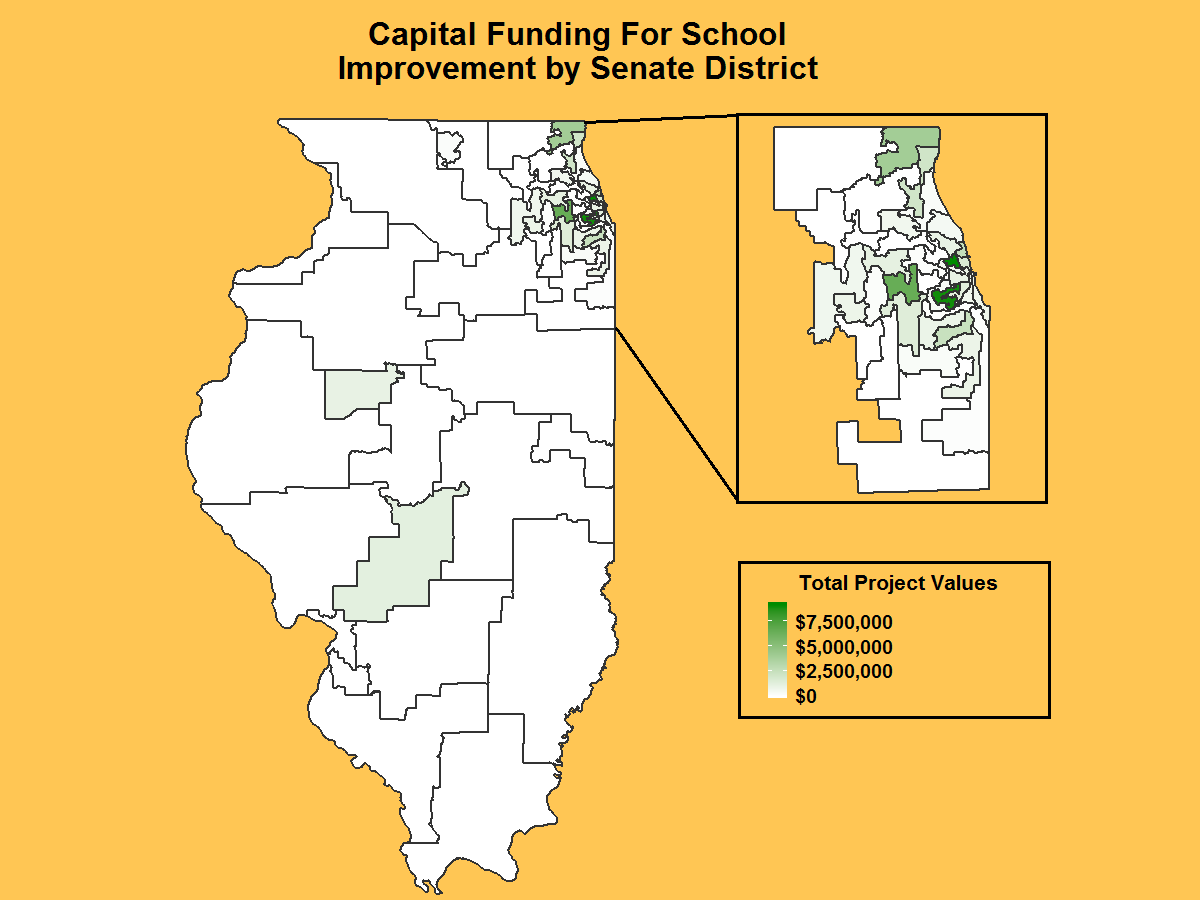 ‍
Even though it's been 10 years since the last capital plan left a myriad of construction projects across the state in need of repair, approving such a massive spending plan is never without controversy, since paying for it comes by hiking taxes on gasoline, parking and cigarettes, along with massive gambling expansion.

One component that helped sweeten the pot for lawmakers on both sides of the aisle: $3.5 billion for education infrastructure improvement projects - new gymnasiums and football fields, expanded libraries, STEM labs, playgrounds and more.

We paged through the thousand-page capital bill, looking at which projects landed in which legislators’ districts, and how that pans out across Illinois.

Here are some highlights:

●The Philip J. Rock Center and School for Hearing and Vision Impairment

-$234,000 for playground improvements at Fairmount School

-$26,200 for playground improvements at Whittier School

-$74,600 for playground improvements at Hillcrest School

-$190,000 for playground improvements at Kingsley

-$148,000 for playground improvements at Lester School

-$111,000 for playground improvements at Highland School

As a longstanding practice,  lawmakers each get an a set amount, called "member initiative" money to spend within their district on capital projects as they see fit. This year, representatives received $3 million, and senators $6 million. Additional grants for projects, in some cases, have also been awarded to various lawmakers' districts. Here's a look at some of the allocations.

And here’s a look at how some of the biggest chips fell, by state Senate District:

The list of line items doesn’t tell the whole story, however. The capital bill also allocates millions of dollars in block grants to undisclosed recipients for school capital improvements to be doled out through a competitive bidding process by the State Board of Education and Capital Development Board. That includes: $22 million for trauma recovery centers, $163 million for infrastructure improvements, and $200 million for maintenance projects, among other block grants.

Despite a deep partisan divide, educating the state’s school children is typically an area where lawmakers from both sides of the aisle can agree. This year wasn’t an exception.  Jason Gerwig, spokesman for Senate Republican Leader Bill Brady, told Capitol News Illinois June 7 that although Republicans opposed many of Pritzker’s initiatives, including a graduated income tax, a minimum wage hike, recreational cannabis legalization and expansion of guaranteed reproductive health services, sending more funding to schools was an area where Democrats and Republicans found common ground this session. See the capital bill's role call here.

“After years of neglecting our state’s roads, bridges, mass transit, and buildings, Illinoisans’ health and safety have been jeopardized, and job creation has been hindered,” Pritzker said in a statement. “I’m proud that the state is on the verge of adopting a bipartisan infrastructure plan for the first time in a decade. Our plan to rebuild our roads, bridges and communities will create hundreds of thousands of jobs throughout our state. The Rebuild Illinois plan will reinvigorate our economy and strengthen our rightful status as the transportation and supply chain hub of the nation.”

*Wagner Acerbi Horta and Meghan Coleman contributed to this report.